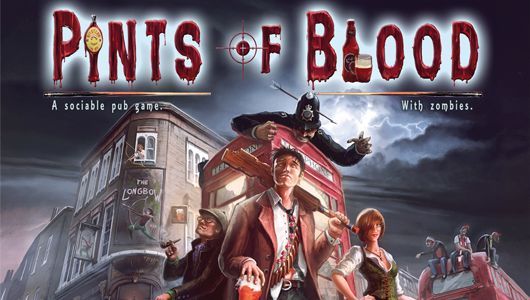 Not long ago zombies and surviving the zombie apocalypses were among the biggest trends in the geek culture. I have jumped on the zombie bandwagon and could talk anyone to (un)death with my zombie theories and survival tactics. However, lately there has been a definite zombie overdose. While there are still great zombie games, movies, TV shows, books and board games out there and in development, I don’t leap from excitement when I hear ‘zombie survival’ anymore, but usually just shrug and walk away. However, there are occasions when a zombie concept persuades me to take a second look, and that is how the story of my playing of Pints of Blood begins…

Pints of Blood is a zombie survival game, set… in a typical British pub. Endless hordes of undead are trying to interrupt your afternoon pint by climbing through the windows and trying to, surprise, surprise – bite you. These zombies have also evolved enough to take advantage of the London transportation. A number 23 bus to Brain Station makes a regular journey around the pub, dropping off new zombies at every stop. To protect yourself from the imminent attack, player allocates up to 4 ‘buddies’ to the pub windows and rolls dice to try to kill zombies. 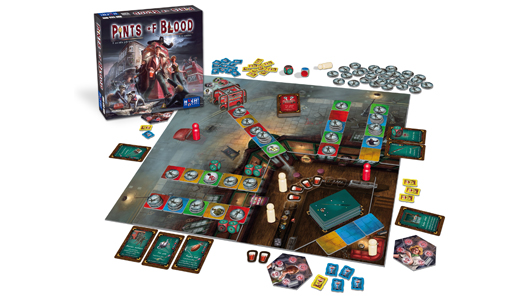 I really wish the saying ‘unlucky in cards, lucky in love’ would also apply to dice rolling because then I would have suitors tailing me for miles. Every time I roll a dice the worst possible outcome happens. It is even worse when I have to roll several dice. As dice rolling is the main mechanic in Pints of Blood, it is safe to say I have been the least favourite person at the gaming table. In my very first playthrough and on my first turn, I killed two buddies, a half of our fighting force. Following that, I had to resolve to ‘the most minimal and safest move’ tactic for the rest of the game so at least my co-players would have more than five minutes of the game to play before we were eaten. I also lost the game in the end. Surprisingly, not because of my dice rolls, but because I had drank the least in-game pints. Yes, I was confused by this as well.

Even if you are not cursed with bad dice rolling skills, at no point during the game you feel in control. The element of luck dominates every aspect of the gameplay. Even though there are some elements of strategy present, like allocating buddies to the windows or choosing how many hits to assign to a zombie tile, they are under powered in comparison to the randomness of the rest of the game mechanics. Some of those elements are quite fun, like the reveal of the type and the strength of zombies only once the attacks have been assigned to them. However, most of them make you feel like whatever decision you make does not matter, as you will be bitten somehow anyway. Which, to be honest, is quite in keeping with the spirit of the zombie apocalypse. 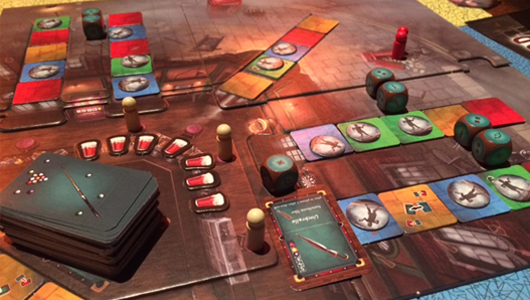 Despite being preoccupied with rolling dice for the majority of the game, this mechanic has little to no effect on how the end of the game is actually triggered. The end of the game condition is specified on one of five cards, one of which is chosen at random at the start of the game and is shuffled in the last quarter of the deck. As soon as the card is revealed, the game ends. For example, the person who has drunk the least number of pints (that act as in-game healing potions) loses the game. That game ending seemingly had no reflection on the actual game and therefore came as a surprise, but also felt very anticlimactic. I guess, the pints might have been marginally relevant because buddies have been in pub throughout the game. I am not going to spoil the other winning conditions, but will only say that they are equally tangentially relevant to the game. In fact one of them, still requires players to fight it out by rolling dice. Again.

While all of this might just sound like I am just a sore loser, I have played the game with several different groups of people, whose feedback was very similar to my own impressions. Even those who have not minded the excessive luck element, have agreed that the game overstayed its welcome and at some point became a race to get to the end of the game card. 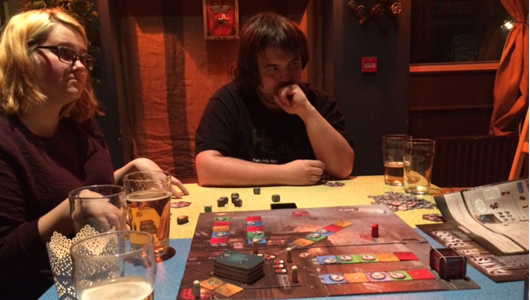 Nora and Will attempting to save the game after I killed 2 ‘buddies’, pints were present

However, there are also a lot of things that I have liked about Pints of Blood as well. The mechanic for spawning and moving zombies, for example. The zombies are coming through the alleyways made up of different colour tiles. To find out where the zombies appear, at the beginning of their turn the player rolls the colour dice and adds a zombie to each tile of the same colour as the dice outcome. In order to move, the end tile is pushed in by a new tile of a random colour (the supply of which is located in the pub), essentially moving the beginning tiles and all zombies on it, if any, into the pub. This means that the position of tiles and zombies on them changes quite fast even throughout a single round, which definitely adds more excitement to the game.

The biggest saving grace of the game is the humour. Want to heal a zombie bite? Have a pint! Special powers? They come with an order of burger and chips. The in-game currency are bag of crisps ingeniously called ‘Stalkers’. You have run out of darts to throw at zombies? Throw a teapot instead. The smell of tea will also prevent extra zombies from spawning in that place. The only slight overlook has been not calling the red zombie bus a ‘Party Bus’. Saying ‘another two zombies have entered the party bus’, when there are already too many zombies on the board, has amused us to no end. It is also nice to see a zombie game that does not take itself too seriously. With the current zombie overdose in the culture and entertainment, I would much rather have a zombie comedy, then yet another horror. 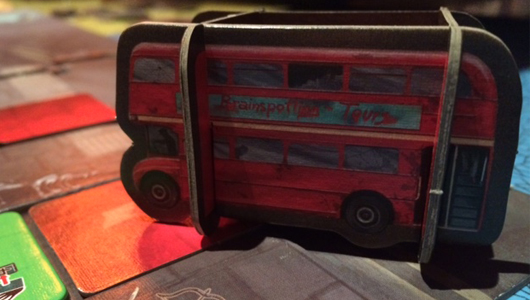 Finally, a few words on the physical elements of the game. Overall all pieces of the game are of good quality. I particularly like the board that fits together like four puzzle pieces and has little indents for the ease of sliding coloured tiles. The artwork is nice and is very self-aware of being just the right kind of ‘cheesy’. The inside of the box is covered with artwork, which I have not seen other board games do. The 3D ‘Party Bus’, assembled out of slot-table cardboard parts, is also a nice touch. The one slight downside is that the die come with empty sides with side outcomes printed separately on the stickers. Even if they are stuck to the die with the surgical precision, they don’t look as nice as an etched die.

Light-hearted and humourous
Party Bus!
Gameplay is too unbalanced in regards to luck and strategy
Anti-climatic ending
Dice stickers?!

Despite some mechanical and balancing flaws, Pints of Blood was an entertaining game. I have especially enjoyed its very British humour and setting. While I do not think I will be playing it often, I can see other people enjoying it. There are definitely better zombie games out there, for example Dead of Winter and Zombicide, but the light-heartedness and humour of Pints of Blood is a good alternative to the dark and hopeless world of other zombie themed board games.

The copy of this game can be played at Loading Bar

Coiledspring provided a review copy of Pints Of Blood