Originally released in 2005 on PC, La-Mulana is a tough-as-nails adventure platforming game from NIGORO. Remade by Pygmy Studio for Wii and now PlayStation Vita, La-Mulana EX takes the original game and makes it portable for the first time. Many of the new additions added to the game are meant to make it more accessible than it has been in its previous iterations; however, I can attest to the fact that these changes do not make the game significantly easier – as can my thumbs.

The story sees Professor Lemeza Kosugi set out to explore the ruins of La-Mulana and discover its secrets, after a letter from his father helps him to find the long-lost city. With such a dangerous adventure ahead of him, he equips himself with only a whip to protect himself and begins his expedition into the ancient labyrinth. Looking for the Secret of Life, he quickly finds more than he bargained for – otherwise he would have brought more than a whip!

The echoes of Indiana Jones are clear to see in La-Mulana. Our plucky adventurer dons a brown fedora and jacket and also happens to be an archaeology professor. This is no bad thing as there is a lot of humour in the game that also seems to have been emulated from Spielberg’s classic series. Starting with so little also helps feed one of the game’s main genre influences – the Metroidvania title. Lemeza will eventually learn how to fast-travel, for instance, which certainly makes things easier later on – but not by much. 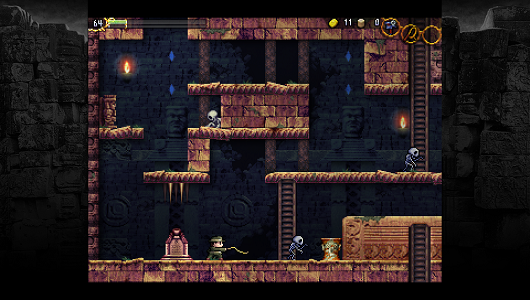 While the setting and characters are well-drawn (both in terms of pixel-art and writing), the game’s main pull is its tough game-play. The ruins of La-Mulana feature many variations of enemies, as well as an equal number of devilish traps. A more recent game with a similar art-style and game-play mechanics would be Spelunky. The key difference here is the fact that La-Mulana also throws a number of mind-scrambling puzzles your way too – as if it needs to be more difficult.

The improved accessibility mentioned earlier takes the form of a more stream-lined introduction to the game. The original title throws you into the ruins and basically allows you to go from there. This EX release gives you a short tutorial to open with and sets up the game’s premise a little better. However, more could have been done to help you. 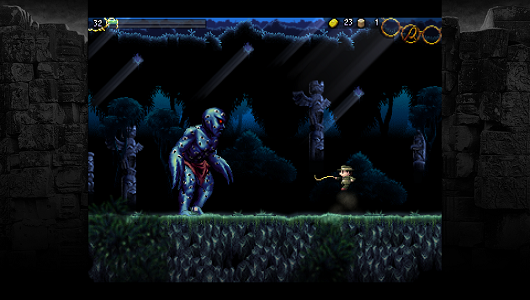 Given the Metroidvania style, unlocking new abilities and finding new items opens new areas to explore. My biggest problem with the game is how little it helps you in these cases. Usually, there is some easy way to identify what this new ability or item unlocks for you, like the coloured blocks in Guacamelee. La-Mulana gives you no such help – instead you need to remember yourself the countless locked doors and inaccessible areas to determine where you can go, or failing that, re-explore those areas again.

This lack of information also means that playing the game in brief chunks (as is the case with most portable titles) often means you need to spend time trying to remember where you were and what you were doing before you can determine what your next goal is. This lack of communications makes La-Mulana frustratingly difficult to enjoy – which is more disappointing as the combat and puzzle-solving elements are largely on-point. 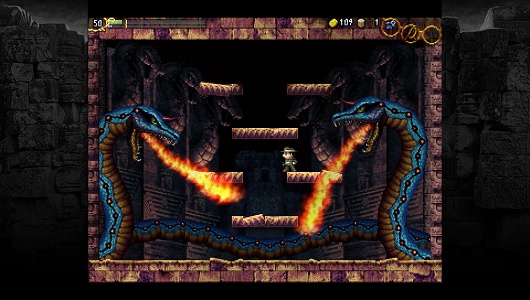 Many would describe what I am asking of La-Mulana EX is to be ‘hand-holding’ and easy. Personally, I enjoy tough games but not obtuse ones. Making a game difficult by requiring a level of skill or intelligence to overcome is fine but not at the expense of more recent advances in game design. Especially when it just seems to force players to feel like they have to work to overcome your game.

Despite this, the game’s aesthetics charmed me. I liked the retro soundtrack and visuals, reminiscent of the 16-bit SNES and Mega Drive era. Unlike Rock Boshers DX, La-Mulana EX is not afraid to embrace game elements that would not have been possible on these systems. The background details are phenomenal and some of the boss characters take up the entire screen! 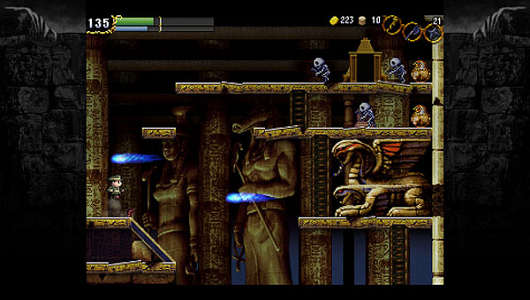 Despite the issues with the game’s communication and the fact that one or several of the puzzles forced me to consult guides, I really enjoyed my time with La-Mulana EX. It most certainly isn’t for everyone, but for those looking for a tough Metroidvania challenge on the go, look no further.