After debuting on PlayStation consoles last year, Puppygames’ Titan Attacks! makes its way to the 3DS in all of its ‘2D-in-3D’ glory. I first played the game at a Curve Digital showcase event last year that included games like The Swapper and MouseCraft – and even then, the addictive, score-chasing game-play and nostalgia-inducing pixel art impressed me. Now releasing on Nintendo’s handheld, I can wholeheartedly recommend this to anyone who missed its previous releases.

Casting you as the last surviving tank commander on Earth, you must fight and defeat an invading force of aliens. By upgrading your weapons and vehicle, you can then turn the tide of the war and drive that filthy alien scum back to its home world. Titan Attacks! may now be sounding like an evil right-wing wish-fulfilment game but it is more than likely me reading too much into its premise. 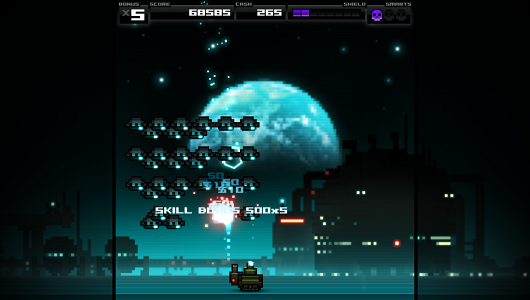 What is plain to see is the game’s unabashedly retro styling – from its audio and visual design, to its game-play influences. Thankfully, while Titan Attacks! does owe a lot to games like Space Invaders and Galaga, it does enough to earn its own identity too.

Each level in the game sees you face off against a horde of descending enemies. You move your tank from left to right and fire vertical shots to disable or destroy the invading force. Each type of enemy moves in different ways, from a basic left to right strafe to a spiralling phalanx of spacecraft. With game-play so similar to some of the most influential games ever made, playing Titan Attacks! feels decidedly familiar and comfortable. The controls are basic but perfectly functional. 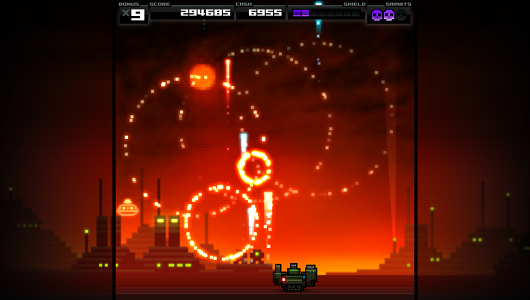 Destroying ships earns you points that track to an overall score. Sometimes, you will see a parachute deploy when you disable a ship or a crate will fall from an exploding craft. If you can avoid hitting the descending item, you will normally get a healthy cash bonus too. In between levels you then get to spend this hard-earned money on replenishing your shields and bombs, or upgrading the tank and its armaments. This adds a lot more complexity to the game than you may think initially – do you choose the extravagant bomb option or conservatively raise your shields a little further?

There are about 100 levels in the game in total, spread across five locations. While Puppygames are not able to be too diverse in their level design, given the restrictions of the genre, they do play around with the variety of enemy ships and their respective formations for each area. The neon-inspired visuals and electronic sounds that make up the rest of the game’s aesthetic help to differentiate between the different locations too. 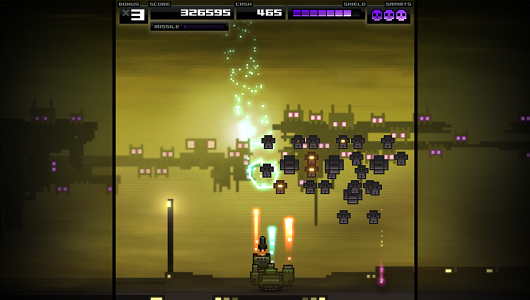 Each level lasts for about 30 seconds, depending on how quickly you can clear the area but all the way through, you will find yourself improving. Your aim and timing will improve, as will your awareness of how the enemy ships will behave. All of this helps to make sure that the score-chasing aspect of the game is constantly evolving, giving you more and more incentive to go back and try to improve your record.

Titan Attacks! has become my go-to game in recent days, during those moments when I have a few minutes spare to play games. The score-chasing bug digs deep and is difficult to remove. Be prepared to lose a few hours to this game.