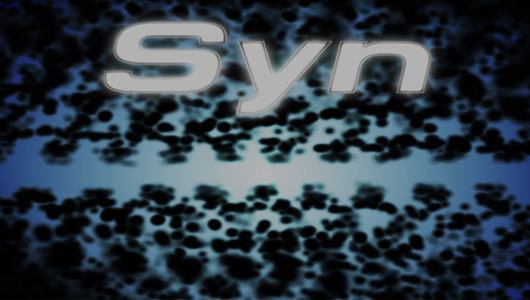 Since I came to the UK, and started writing for BRB, I found myself playing a lot more games on my phone. The reasons for that are I can write reviews for them and my 30 minutes train rides allow me to play them. Because of that, I have played some fun games, like 80 Days, Sneaky Sneaky and Bang Man!. But there are, of course, times when you are playing games that just aren’t great. Sadly Syn is one of them.

You’re playing Syn, a synthetic organism which follows your finger. This is the means to control the game, you drag your finger around and Syn follows that path. Your main objectives in the game is to stay alive and earn points. You get points by destroying malcrobes, black dots which will damage you on contact. Another big part of the game is getting high scores using multipliers. Each time you get an amino, a little white dot, your multiplier gets bigger. The way to get aminos is to break bonds – bonds are lines between two dots and you break them by moving through them. Each time you break a bond, it releases a little blast of energy, this is your main way to get rid of pesky malcrobes.

The game features four different modes: Timed, Classic, Wave and Versus. At the start of the game, only Timed is available to play, the other three have to be unlocked, through in-game currency or trophies. These modes don’t play too differently. In Timed, you start off with a bond and a small number of malcrobes, and you have to ten seconds to break all of the bonds or else you’ll fail. As the level goes on, more malcrobes will spawn, always indicated by a little danger symbol, and it’ll be more difficult to stay alive. 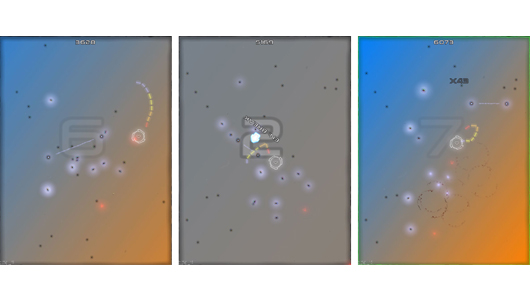 Classic, and Wave for that matter, follow a similar principle, asking you to avoid malcrobes and break bonds. The only difference in Classic is that the bonds will form a path for you to go through. Malcrobes will still spawn in your path, so you have to avoid them while still following the path of bonds. Wave mode starts similar to Timed – it’s you, a bond and some malcrobes. But instead of malcrobes spawning at random all over the screen, they will only spawn at the edges and in the centre. What also distinguishes these two, unlockable modes from Timed is that they feature new types of enemies – in Classic, it’s a black triangle, and in Timed, it’s a wiggly line. What exactly these things are is never explained in the game. They’re just there.

This brings me to one of the main issues of the game. It does not explain itself nearly enough. Sure, it has a tutorial, but that just explains the bare minimum of the game-play, it doesn’t tell you about the additional enemy types, or that there is even an upgrade system. This system allows for you to upgrade five different genes in Syn. A bigger shied, more health, magnetism, for loose aminos, a projectile power, and the tail-bomb. Although these upgrades make the game a bit easier, their descriptions are so poorly written that I didn’t know what some upgrades did. I just found out through sheer luck. 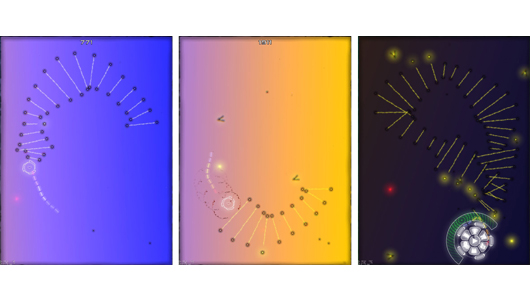 What’s nice about the game is its visual design. All the menus are arranged circular, the way you change any setting or choose between options it to turn a wheel. The centre of this circle is always the play button. As the game requires constant touch for playing, as soon as you let go of the screen the pause menu will be brought up.

Still I can’t tell you why you should play this game. In recent times you had games on the PC and consoles that were titled “walking simulators”, that means a game’s main mechanic is to walk a certain path and you just do little puzzles in between the walking. Playing this game reminded me a little of these types of game. You swipe your finger around and do some stuff as well. There isn’t a narrative to the game, no objectives – just getting high scores. Playing this game gave me nothing in return, no feeling of accomplishment, no fun, I was just kinda annoyed to do these boring tasks. 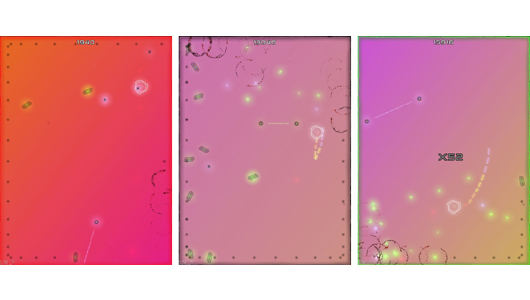 So should you play this game? I honestly don’t know. It doesn’t really do anything wrong, all the mechanics are working, there’s just no emotion while playing it. For the most part I didn’t even really know what was happening on the screen. I moved my finger, stuff exploded, I got points and then I died. In about 1/3 of the times I died and the game was supposed to score me and place me on the high scores the game just had a blank screen. The only way to continue was to completely close the game and restart it. Luckily my progress was still saved, or else I would have given up even quicker. Bit honestly I see no reason for you to play this game. It’s a mediocre game with no real goals and just a lot of unexplained things happening.