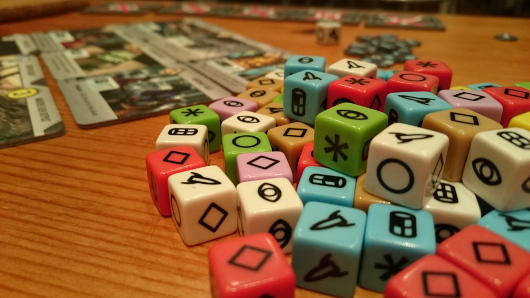 Review: Roll for the Galaxy

The first obvious problem with Race for the Galaxy is the iconography used on the cards. A large number of the cards exclusively use symbols to indicate what the card does, which is great when you can read the weird space language it has got going on but not great when you need to learn it before you can make any sensible decisions in the game. However, I suspect the more problematic aspect of Race for the Galaxy is the complexity of the decision space each turn. You have cards in play that give you special powers or abilities, you have a hand of cards that you could put into play, and then there is the shared draw deck or around 100 mostly unique cards in the middle of the table. That’s a lot of different options to assess. Making it more challenging is the fact that to play any card you have to discard a number of cards equal to its cost, so it’s not just about deciding which card you want to play, it’s also about deciding which cards you can afford to throw away. That’s a lot of information to process, and I think this is the reason the game is so hard to teach – there is no clear way of assessing what the best option is for new players. 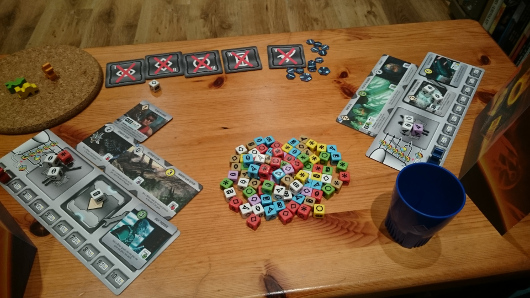 Fast forward to 2015 and along comes Roll for the Galaxy a dice-based reimagining of Race for the Galaxy. Originally I had no intention of getting this game, I already have Race for the Galaxy, think it is fantastic, and never get to play it – why would I need another version of it? However I heard lots of people saying it was great and bought it on a whim. Opening it up and reading through the rules it felt very similar to Race for the Galaxy, so far so good, and when I tried to rope some friends into playing with me it was certainly faithful to the original in that I had no idea how to explain the game or how to play it. I stumbled erratically through the explanation of the actions you could take and the phases of the round, then just gave up trying to teach the game and told everyone to start playing and it will all make sense. Amazingly it did! 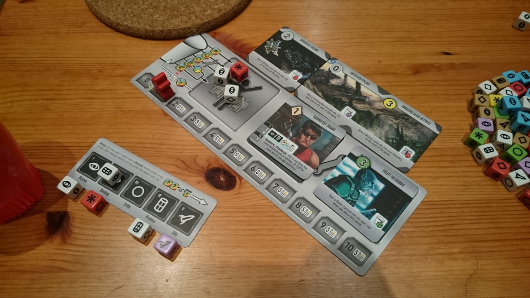 The reason Roll for the Galaxy succeeds is that it tightens the decision space each round to a manageable number of options. Each round you make a rough plan of what you want to achieve; do you need explore to find new planets to settle, perhaps you want to develop new technology, or do you need to ship the goods your empire has produced to generate resources to pay for your expansion? You then roll your cupful of dice and can just focus on getting the most out of your roll without worrying about anything else going on in the game. Key to the success of this is that Roll for the Galaxy has smart systems to give you just enough control over what you roll so that the game is about managing your luck, not about getting lucky. 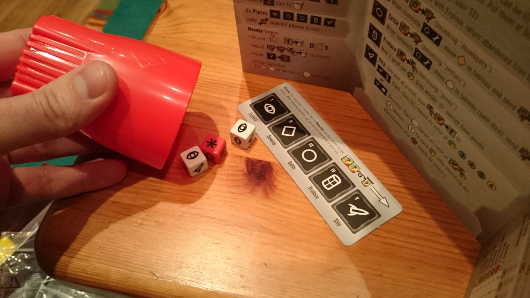 However all of that is a very dry way of describing how much fun the game is to play. There’s a delight in picking up all your dice and shaking them in your cup before slamming it down behind your screen, and then hunching over like an eagle protecting its dinner moving your dice around to get the most out of your roll. Then you get the big reveal where you get to see if you have successfully anticipated your opponents before sweeping up all the dice you get to use for the next round. It is just fun. 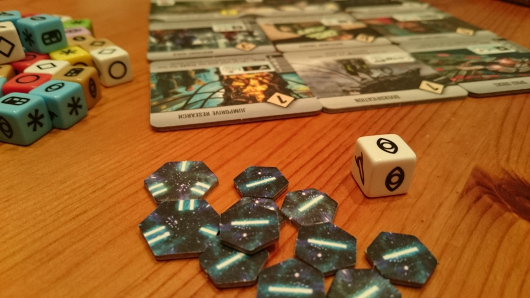 In an effort to make this sound like an impartial review there is one potential problem with the game, it is really easy to cheat if you as so inclined. As the dice allocation happens behind a screen and no one sees what you roll before you do. This means that you could pretty much put the dice wherever you wanted, and it would be hard for the other players to spot. How much of a problem this is will depend on you and your group, but personally I don’t worry about it too much, because the game is so much fun (whether I win or lose).

So if the theme of building a space empire appeals to you at all, and you like a dice game with enough depth and strategy to be more than just luck, check out Roll for the Galaxy.

The review copy of this title was purchased on a whim by the author.
Official Game Site