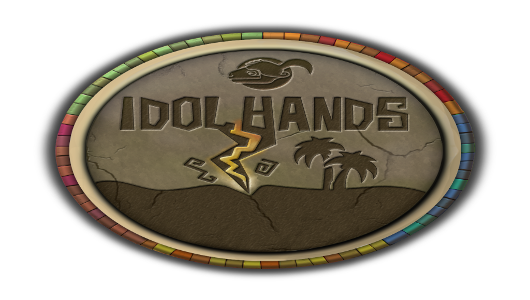 Strategy games make up a genre that hasn’t been particularly popular in the last few years. The times when Command & Conquer and Age of Empires were the most popular games are long gone – though there are, of course, some strategy games everybody knows, like StarCraft and League of Legends.

Idol Hands wants to remind its players about the gaming world long ago – where you were a god over a cute little people and transformed the earth as you liked it. This god-simulator does a lot of things right but has some issues in the long run.

Idol Hands makes you the benevolent god over the Furlings, cute humanoids. Your mission is to defeat the evil god and his Furlings. And that’s basically the whole story of the game. Over the course of the campaign you learn how to be a god and use your godly might. The first thing you learn is how to change the landscape. You can either lower, raise of flatten it. Most of your time will be spend with doing the latter, as you need to make room for your Furling village to grow. Later on you will get a few powers: rain, lighting, earthquake, meteor and the volcano. All of them except for the rain are used to smite you enemies in various degrees. Rain is used to extinguish fires, give your farms a buff and make trees grow.

Your other responsibility is your village. In the center of it is a circular monument, you use to command your flock with. You tell them to build woodcutter, farms, blacksmiths, temples, and soldiers. All the buildings have limits in how many of them you can build. The building process can’t be influenced by you, you just tell them what to build and the Furlings will look for a piece of land and build there. This is why you always have to provide a flattened land, so the Furlings have somewhere to build on. 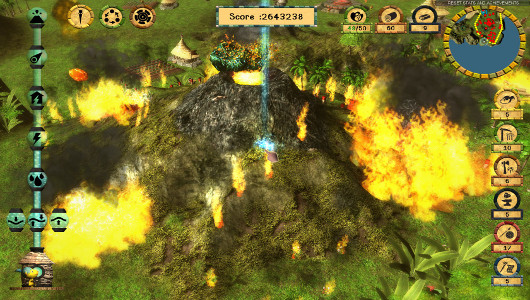 The main goal for your village is the production of soldiers, to defeat the other Furlings. As with building you can’t really tell your soldiers where to go. You can only stick a totem somewhere and they will more or less go there. Their AI could be a bit better, as they sometimes get stuck in places, ignore enemies on their way or just fight somewhere you don’t want them to fight. The main way of destroying your enemies is your godly smiting. Your soldiers are mainly there to slow your enemies’ rebuilding effort.

The fun part of the battles is your godly power. Flinging meteors, creating earthquakes and making earthquakes happen to decimate the enemies’ buildings is incredibly fun and satisfying. But, as your powers need to recharge for a while to be used again, you often just stare at the mana bar to refill and watch your soldiers take on the enemy agonisingly slow. The longer you play this game the more you’re able to see where it got its inspiration from. Enemy converting priests are a nod to the priests of Age of Empires with the same power, the borders look like they were taken from Settlers IV and manipulative mountains could be taken from From Dust. Don’t get me wrong, I’m just pointing these things out, I’m not accusing the developers at all. It’s better to take inspiration from well working mechanics than to forcibly try something new and make something that’s no fun at all – and Idol Hands makes something good with all that.

All in all Idol Hands is a pretty game. He islands you build your villages on feature some nice vegetation and sandy beaches. It’s a shame that during each level your will just flatten everything to make more room for your expanding village. At the end of most missions you deformed an island worthy of a holiday resort to the flat, boring grounds of your village. Despite all of that it’s still a pretty sight to look on your village and see your Furlings grow and prosper.

Technically the game has some issues as well. You could rotate your camera around but in the version I was playing that never worked properly, the camera would just jerk around for a while and not move around a lot. And moving the camera around isn’t smooth at all. You can move it around by pressing the mouse butting and moving it, or you press space-bar, then the camera zooms out and you have to click on where you want the camera to move next. In a strategy game where you are moving around a lot a jerky, choppy camera is one of the most annoying problems. In all fairness, the game is fun, especially for children. Building your little village and waging war on the enemy is quite enjoyable and satisfying, especially your powers. It has some problems: A non-existent story, slow game-play and monotonous mechanics. Still, if you want to be god over a furry little people, and you can forgive minor mistakes then go ahead and play this game.