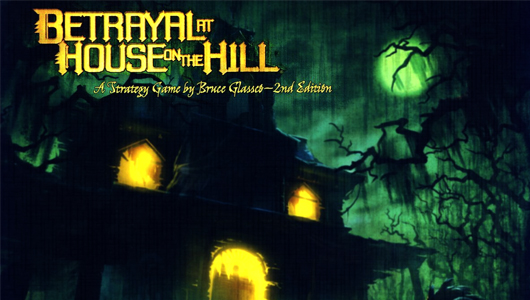 Review: Betrayal at House on the Hill

A priest, a friendly neighbourhood fortune teller, a jock, an annoying little boy from down the road and a sweet little girl, go on an adventure. They are walking for a long time – it is dark, raining and cold. Then they see an old house on top the hill, its windows glowing with a warm light and the front door opening, welcoming them inside. What a nice place for a night stop, right? WRONG! As soon as they enter, the front door shuts behind them! There is no way out! Every room they enter contains dangers, traps, items and mysterious omens! The House is trying to kill them! Even worse, it turns one of them into a betrayer who will make sure none of them get out of the House alive.

Betrayal at House on the Hill is a great example of a cooperative-competitive board game. It is filled with that wonderful schlock quality of the best B-movie horrors and allows you to create your own haunted mansion, unleash and kill all types of deadly monsters while trying to avoid numerous traps and unpleasant events. The game is divided into two phases – Explorations Phase, the cooperative part of the game, and the Haunt Phase where one of the players will be turned a traitor to compete with the other characters, now called the heroes, for their survival. 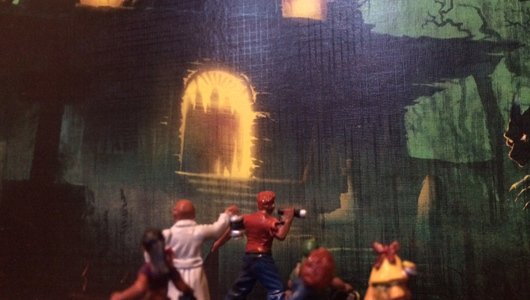 In the first phase, the players explore the House by randomly laying down room tiles for corresponding floors – basement, ground or upper floors. Every game you play will be different because the arrangement of the House will never be the same, especially since some rooms can be place on more than one floor.

Betrayal excels at keeping the feeling of ‘something bad is going to happen!’ throughout. Even a simple act of flipping over a card creates an anticipation of bad things coming. This is because almost every room has one of the three types of symbols. The single symbol that is good, Item, is useful but also very rare. I have played several games without picking up a single item card for my character. This teaches you quickly not to expect any help from the House, especially since the other two symbols are more common and are also very bad for you. One of them, Events, tests the strength of your character. This is where the levels of your characters’ traits become important. By using a mixture of skill (your character stats) and luck (rolling dice), you character must attempt to survive whatever horror the House conjures. If you do this particularly well, you might even get rewarded with a stat boost for your character. Omens, the last type, misleads you into thinking they are good by giving players items or even companions, such as a dog, but they will eventually lead to the worst thing of all – the Haunt. 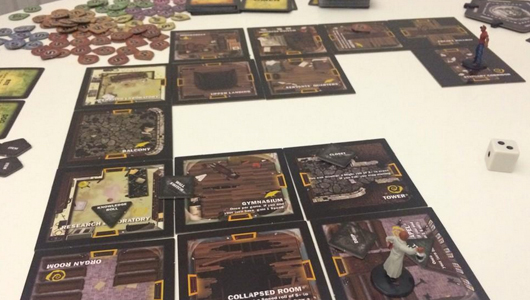 The Haunt Phase can be triggered at any point in the game. Every time an Omen card is picked up, the revealer must roll six dice and if he or she rolls a number lower than a total number of Omen cards already revealed, then the Haunt begins. Therefore the Haunt will probably not start at the beginning of the game, when there are only few Omen cards on the table, as it is very unlikely to roll six zeroes. Although my friends have found out that with my dice rolling luck, I can beat any odds and have learnt to expect the worst when I pick up an Omen card.

Here is where Betrayal truly shines in its unique approach to tradition cooperative-competitive gameplay. Until this point all players have been working together, trying to survive against the attacks of the House. However, after the Haunt, one of them turns into a traitor set on killing the heroes in the most gruesome way possible. If this sounds like an unfair fight for one lonely traitor faced with at least 2 (maximum 5) other characters – don’t you worry! The traitor has some very nasty friends joining shortly. The traitor receives a Traitor’s Tome that describes the specific Haunt and the powers the traitor now possesses. While the heroes get the Survival Guide and decide on their best survival tactic together. There are 50 different Haunt scenarios with their own specific win conditions for the traitor and the heroes. This, together with varying layout of the House, means that you can return to the game again and again because there will always be something new happening.

In this review I have tried to talk as little as possible about the specifics of the cards, room tiles or the Haunts because reading the descriptions (out loud and in a dramatic voice!) for the first time is a great fun in itself. The cards are a great mixture of the funny-horrible, the rooms are beautifully detailed, the Haunts come with back stories and every character has their own story which can be found at the back of the Traitor’s Tome. If inventing stories for characters is something you love doing, then you have everything you need to go crazy creative. If not, then the information and art give enough to set the scene and get you in the mood for some horror-fun. 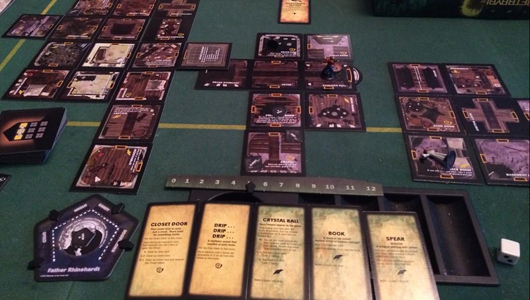 I only have one tiny gripe with the quality of the game itself. Every character card has a set of sliding clips to indicate the characters’ traits value. These clips are so good at sliding that they need as little encouragement as breathing to slide right off. My advice would be to put the clips on top of the cards instead, which makes their ability to keep track of the skill levels slightly more reliant.

As for the game-play, I could not fault it for much. If I would to really nit-pick, I could say that choosing a character with the highest might trait always seems to give an advantage as every play-through will contain some elements of combat of varying dominance on the gameplay. If you will not win the game, then at least you will survive the longest.

Finally, a few words on the rule books themselves. Do not let the number of them scare you – there are 3! Read through the basic rule book. It is well written, easy to understand and the gameplay itself is not hard to follow at all. Even the newbies to the game settle in comfortably after playing one or two rounds. However, do not read the Survival Guide and the Traitor’s Tome before you start playing. They only contain the descriptions of the Haunts and why would you want to spoil all the fun?! The reveal of the traitor and the Haunt is always one of the most exciting parts of the game! 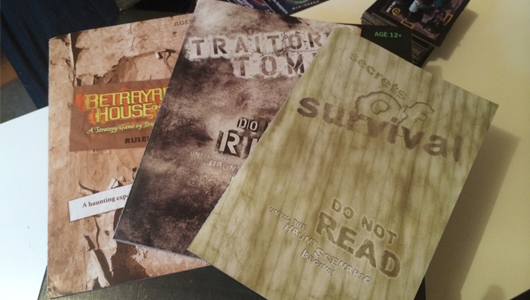 Betrayal at House on the Hill has been one of my favourite games for a long time now. I have been playing it a lot. In fact, as I am finishing this review I want to play it. This game is great for the purposes of easing those who are still uninitiated into board games, the rules are easy to understand and you will come to love rulebooks instead of being put to sleep by them! With 50 possible game end scenarios and the House building mechanic, Betrayal has a very high level of replayability, well worth its cost.

The author purchased the copy of the game