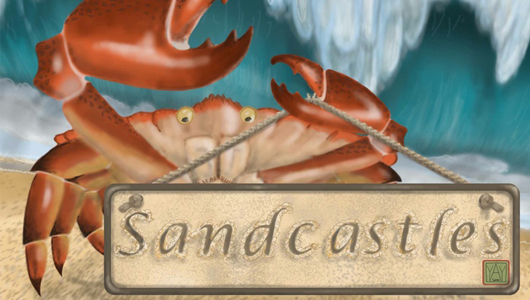 I was first introduced to the world of Andrew Harman’s games by playing Frankenstein’s Bodies. I made up my mind about the game almost instantly – I liked it a lot. It appealed to my slightly mischievous and impish board game play-style. So when Andrew revealed he had another game on the way, Sandcastles, I was very eager to play.

From the get-go, it became obvious to me, that Sandcastles could not have happened without Frankenstein’s bodies. The experience of making the first game, but more importantly, seeing other people play it, is clearly reflected in the way Sandcastles is designed, and to me, makes for an even better game. There are some similar mechanics present between the two games. You pick up a card and play a card, you play cards in your ‘play space’, collecting sets and earning bonuses, and there are sneaky ways to mess up your opponents, but always in a fun light-hearted way. However, Sandcastles focuses on the most effective actions, without any excesses, making for a more dynamic and concentrated gaming experience.

The rules of Sandcastles are incredibly simple. You and your friends are on a beach, and, as the title suggests, you are building sandcastles. A little friendly rivalry is happening as you are all competing to build the best piece of architecture that the beach has ever seen. However, there is one restricting factor – sometime in the next 30 minutes or so, a big wave will come and wash your masterpieces away… The castles can be constructed out of three types of cards – buckets, crabs and seagulls – in arrangements and sizes of the player’s choosing. However, if a player builds a castle in a pattern/height/type shown on one of the bonus cards, which are randomly dealt at the beginning of the game, then that player will also get the bonus card when the castle is finished. Completed castles then form a victory deck next to their respective architects, and each card in the deck is worth one victory point at the end of the game. While crabs and buckets cohabitate firmly on the ground, seagulls can be stacked on top of any cards, and there is even a bonus for the tallest sandcastle. Some extra care, however, should be taken with the bonus cards. They are kept revealed next to the player, and if another player completes a castle with the same bonus later on in the game, they can steal the bonus card for themselves.

So what can you do, if you have built this majestic fish shaped castle that is 7 seagulls tall, and you see that your would-be friend is sneakily doing the same thing, trying to steal your hard earned bonuses? In this case, there are attack cards that allow players to take cards from each other. Now this is very important: buckets attack seagulls, seagulls eat crabs and crabs can make holes in buckets! For example, if your friend’s seagull looks particularly exciting, you can throw a bucket at it and take that card for yourself. However, your friend can play their crab attack card on your bucket to leave you empty handed. Yet, this is not the end, because then you can play your own seagull attack card and eat your friend’s crab! If the cards in your hand permit, such attack circles can repeat until you and your opponent run out of cards in your hands. Attack cards go to the victory deck of the winner and then also count as one victory point per card at the end of the game. 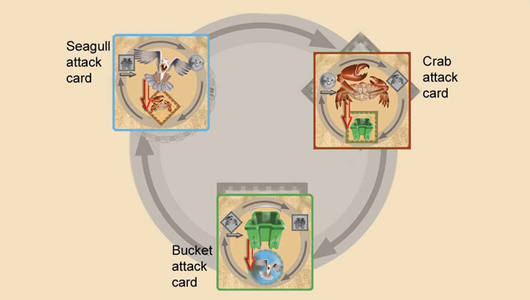 One aspect of the game I was initially unsure of was the theme. I was more excited about doing illegal and dodgy corpse surgery somewhere in Frankenstein’s basement, and the beach seemed a little bit too tame for me. However, the humour of the game and the humour created by the game might have changed my mind. For example, shouting at my bearded friend who was casually sipping a pint of beer: ‘I will steal your bucket!’ The fact that I stole his bucket by setting a crab on him, made the moment even better.  Or innocently saying to a fellow player that I have met for the first time five minutes before: ‘You have crabs!’, only to realise what I have said when everyone went completely silent… However, even without awkward misunderstandings, that luckily the other person found amusing, the game was a lot of fun. Mainly triggered by the game’s attack/steal mechanic, the gaming table was always filled with funny banter and various stories of scurry adventures.

While the game can be played with two players, it will be beneficial to have a bigger crowd when playing Sandcastles. This will allow for more card options displayed on the table, both to take and to steal, as well as encourage competitiveness between the players.

As is probably obvious, I have enjoyed Sandcastles a lot. It is a quick social game with easy rules and simple, yet charming artwork. The game is scheduled to launch a Kickstarter on the 1st of March, so keep your eyes out for that big wave! 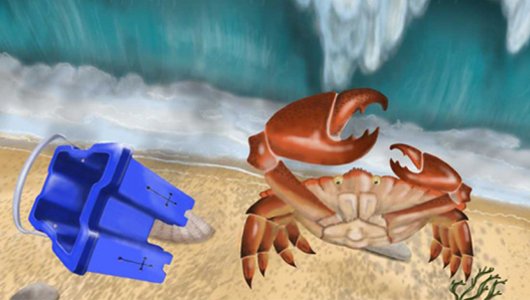