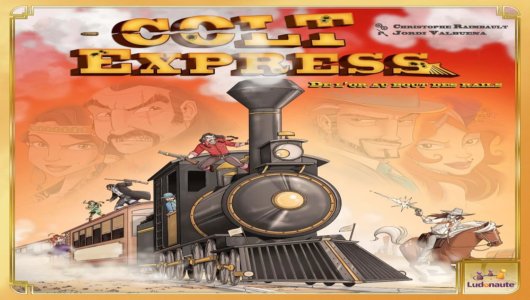 I first played Colt Express at the last Tabletop Tuesday event of 2014. Not only was it one of the last new games I played that night, it was one of the last new games I played that year! Less than a week after playing it, at least three of the six people who had participated have purchased a copy – me included. This fast-paced, chaotic cowboy game about train robbery had an immediate and lasting impression on all of us. Here was a shockingly pretty and overwhelmingly thematic game, with simple rules and incredibly fast-paced game-play. I knew there and then that I would be spending a lot of my Christmas break playing with a toy train set…

The first thing that will strike you when you sit down to play Colt Express is the board, or more specifically the lack of one. Instead you’re presented with a fully three dimensional cardboard toy train. There’s a locomotive up front where the State Marshall guards the serious loot. Six beautifully designed carriages link together filled with diamonds and purses. Your playing piece sits at the back of the train – the coloured Meeples all board gamers and familiar with but with a little cowboy hat. The game even comes with cardboard cacti and mountains to disperse around the train.

When fully assembled this has to be one of the prettiest board games I have ever played, absolutely oozing with the theme even before the first turn is played. This is a game about cowboys – about cowboys robbing a train – and it will be awesome. 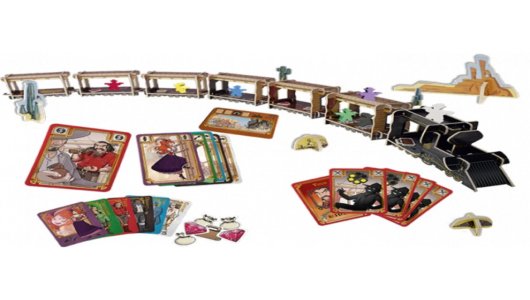 Of course this could all just be one big gimmick. A pretty game with terrible rules is still going to be a terrible game. Yet Colt Express is so much more than a pretty face with a fantastic central mechanic that makes for a fast paced, exciting and downright fun experience. Each player starts with an identical deck of action cards which they’ll draw from over the course of the game. These actions include moving from carriage to carriage, climbing up onto the roof of the train, picking loot up off the ground, punching other players or firing your gun. Each round you’ll get a chance to play a number of action cards in turn.

However, rather than simply playing a card and resolving the action instead all action cards are played into a central pile and then resolved at the end of the round. This central mechanic works in so many ways. First of all, it keeps the game moving at a fast and exciting pace. Cards are quickly laid down in the centre of the table and then, suddenly everything plays out at once. More importantly however, you really have to concentrate to remember exactly what will happen when the playing pieces start moving.

The game becomes a test in memory, trying to recall what every other player is doing this round and in what order. This is made doubly complicated because not all cards are played equally. More often than not you’ll be playing cards face up for all to see but different rounds provide different card placement rules. Sometimes you’ll be playing two cards at once, other times the playing order will suddenly switch and, best of all, you might play action cards face down and hidden from the group. This means that when you reach the end of the round and all the actions are revealed you never know exactly what’s going to happen. The person you planned on punching leaves the carriage before you can get there. You climb onto the roof and suddenly find yourself caught in the crossfire of an intense gun fight getting riddled with bullets from both sides. You plan to sneak into an empty carriage to steal the massive pile of diamonds only to have someone secretly move in the Marshall who shoots you and chases you to the roof. Each of these actions is filled with theme. Couple this with the unpredictable and chaotic nature of the game and really feel like you’re in your very own spaghetti western. 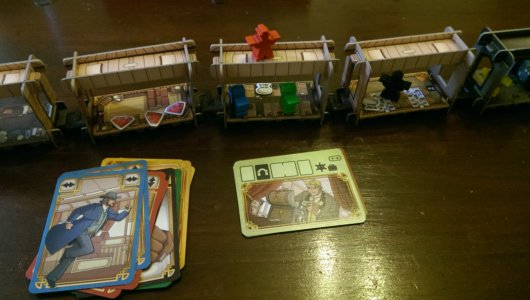 The majority of the actions allow for some fantastic player interactions or, to put it another way, some great ways to screw with your opponents. Punching an opponent sends them flying to another carriage dropping a valuable piece of loot in the process. Getting shot, however, doesn’t cause you to lose any of your all-important cash but it massively affects your performance in later rounds. Each time you get shot, whether it be from an opponent or the ever present Marshall, you pick up a bullet card. At the end of the round when everything has been resolved and the dust has settled you collect all you used action cards and also shuffle any bullets you received into your deck. Getting shot a lot means you stand a good chance of drawing a useless hand of six bullet cards in a subsequent round, forcing you to forgo playing an action just to draw into your deck. It adds little elements of deck building into the game similar to games like the classic Dominion or Blood Bowl Team Manager (reviewed just the other day). Sure, unlike those games you never get to add any new actions to your deck but play poorly and get yourself shot and soon you’ll find yourself unable to do the actions you want in later rounds. Specific character powers also add more fun and exciting ways to mess with other players. Django’s bullets for example are powerful enough to knock his opponents to another carriage, Cheyenne is a master pick pocket who steals loot as she punches and dual-wielding Tuco can shoot through the roof, marching along the top of the train like a mad men blasting anyone fooling enough to walk below him. 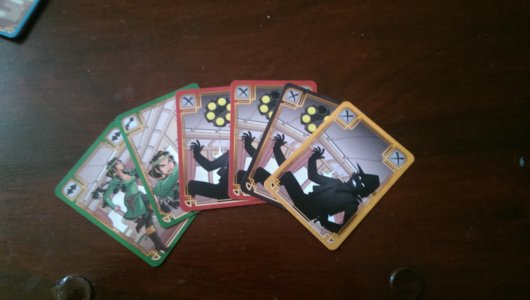 Despite all this though it’s debatable how much strategic depth Colt Express actually has. The chaotic, unpredictable nature of the game makes it, at times, almost impossible to accurately plan ahead. There probably isn’t an “ideal” or “perfect” strategy to get the most loot and win the game. The thing is though…it doesn’t really matter. I’ve had games of Colt Express where I ended up without a penny to my name and a deck comprised almost completely of my opponents bullets and yet I still had a really great time. This isn’t a game where you ponder for hours over your next move. This isn’t a game where you build intricate and complex strategies. No, this is a game where you forgo winning just to make sure you shoot your best friend/boyfriend/girlfriend/sibling/pet dog as much as possible. It’s a game where you make sure you get sweet sweet revenge against the person who just punched you into the Marshall’s carriage. It’s a game where you run along the roof of a speeding train firing bullets into the floor. Most importantly it’s a game that is, almost undeniably, incredibly fun.

Colt Express is available to play at Loading bar.

Board games come in many shapes and sizes. There are humongous space based war games that take multiple evenings to complete. There are brain melting farming simulators with a million components most of which resemble tiny wooden animals. There are complex card games that you invest a terrifying amount of time and money in just to make the perfect deck. All of these games are great and I love playing them. However, sometimes when I sit down to play a board game I just want to have a fun time without having to focus too much on complex strategy. That doesn’t make Colt Express too simple and it certainly doesn’t make it boring. Instead, despite being the last game I played in 2014, it makes Colt Express one of the best and most exciting board games I played last year.