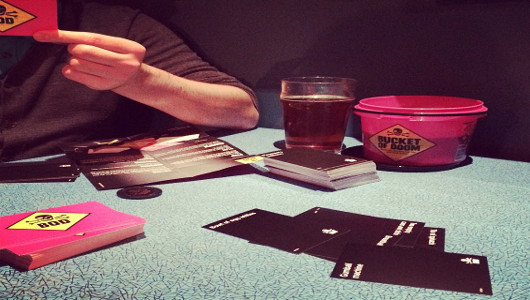 A Beginner’s Guide to Board Games

It’s the start of a new year, so now is the time to reminisce about the things we have done in the past 365 days. During the last few months I have been playing a lot of board games. As I’m still pretty new to the genre and have played quite a few different games, I thought I would talk about the games I learnt to love and would recommend to everyone who wants to dive into the world of board gaming.

My first few games form the classic introduction for many a player: the bluffing games – Resistance, Avalo, Werewolf. These games feature few rules and don’t have a big setup. In all of these, the main objective is to find out who is lying. In Resistance, you have to deal with spies, in Avalon with dark wizards and in Werewolf with, who would’ve thought, werewolves. Let’s take Resistance, the simplest of the lot, and have five people play. Nominally, you’re all in the resistance, but two of you are spies and the spies know each other. Now you have five missions, the resistance wants these to go smoothly, the spies want to fail them. But how do you find out who is a spy and who is not? Well, you have to talk it, or rather shout it, out. As there are few rules and the most you will do is shout, this game is perfect for beginners or those who don’t want to commit to a game for hours.

Another classic, easily taught to new players, is Ticket to Ride. What is more relaxing than building trains in a turn-of-the-century America? Again, the rules are simple: get train cards, build routes with miniature trains and get points. With its easy rules and slow, relaxing game-play, this game introduces you perfectly to a euro-style board game. Everyone is involved until the end and the game is without major conflicts. As soon as you get bored of the basic game, there are tons of expansions to keep you going.

So now you lied to your friends and built some railway lines across parts of the world, what else is there to do? How about racing camels in the desert? Intrigued? You should be. Camel Up is a game about racing camels, betting on the outcome and, the best part of the game – the camels stack! Up to eight player can partake on this gambling extravaganza. The most advanced strategies this game has to offer are educated guesses. On most cases you can’t really know who will win, so you just bet on a random coloured camel and really believe in it. Camel Up is fantastic for newer players, as it’s so very random. Rules are few, and the fun is great in this game.

Another classic beginner’s game is King of Tokyo. Players control giant monsters and have to take control of Tokyo. This is done through simple dice-rolling, you either get points, heal your wounds, get energy – the game’s currency – or you hit another monster. Again, because of its simple ruleset and accessible game-play, it’s easily taught and played. What sets this aside from Ticket to Ride and Camel Up is the small room you need to play. Essentially, you could play this game without any sort of board, just a place designated for Tokyo and you would be good to go. A proper expansion and some additional characters give the game a bit for substance for more familiar players. A sequel called King of New York was recently released, an in-depth comparison of the two titles can be found right here on Big Red Barrel.

Especially for those of you who like bluffing games, Cash’n’Guns might be a great alternative with a bit more action and a bit less talking. In the game, you’re all mobsters and gangsters in a Mexican Standoff, all for some loot. The game lasts eight turns, each with eight random items on the table. You have a foam gun, three of your ammo rounds are armed and five are blanks – don’t worry the bullets are just cards, nobody will actually shoot you. What follows now is just a lot of pointing guns, dodging bullets and getting shot. Once everyone has fired their gun, you divide the loot on the table and start the next turn. Especially, with the maximum amount of eight players, this game is just madness and great fun with a pint.

After all of this violence, why not have a relaxing game of Takenoko. This game makes you build, cultivate, and eat bamboo. The goal in this game is to finish seven different objectives. These are divided into different groups: landscaping, laying down garden tiles, growing bamboo with the gardener and eating bamboo with the panda. The game is, weirdly enough, competitive and co-operative at the same time. As you’re all sharing the board and finishing similar objectives, it sometimes happens that you complete your own and someone else’s objective on the same turn by accident. A reason why I like it so much is its beautiful board and great manual – it features a little comic strip with the game’s story. Again, it’s great for beginners as it’s simple and fast to play.

Betrayal at the House on the Hill

I saved my favourite for last: Betrayal at the House on the Hill. It all starts with a group of people exploring the aforementioned House on the Hill. As you’re playing the game, you will add rooms to the house – in most of these rooms, there will be events which means you’ll have to overcome some challenges by rolling your dice. At some point in the game, there will be a haunt, someone of your group will become the traitor, and the game-play will change immensely. There could be dragons or giant cats to be fought or you just have to disarm a bomb. This game is best enjoyed with someone there who is familiar with the rules, as there are a lot, and it can be overwhelming at first. But nonetheless it’s great for beginners, as you first explore the house as a team and help each other out occasionally, and then later you have to defeat the traitor in your midst to win.

There are, of course, some games I left out, either because I haven’t played them yet or because I just forgot them. These are games I always play with beginners before moving on to something more complicated or obscure. However, the best way to get into board gaming is to just get together with some friends, get a game and just play it. Or you know, you could just go to one of our Tabletop Tuesdays and play games there.

Tags: Betrayal at the House on the Hill, boardgames, Camel Up, Cash'n'Guns, King of Tokyo, Resistance, Takenoko, Ticket to Ride