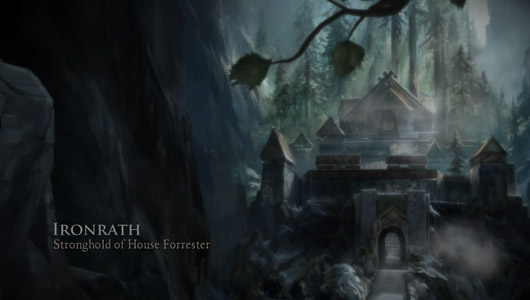 When Telltale Games announced their own adaptation of George R.R. Martin’s popular fantasy series A Song of Ice and Fire, it seemed widely agreed that this well-loved world had been put in good hands. HBO‘s adaptation, Game of Thrones, almost perfectly suits Telltale‘s reputation of interactive storytelling, pain-staking decision-making and involving characters. Condensing an immense fictional world into 20 or so hours of casual gameplay is a challenge, yet luckily Telltale are more than up to the task. The game focuses on a particular minor House in Westeros, and the rising tensions that occur amidst the major conflicts and treacheries that dominate the Seven Kingdoms.

One important thing to note is that being familiar with the Game of Thrones plot (from the television show specifically; the game takes place within the narrative of the third and fourth seasons) is pretty much a necessity. Telltale have tried to work around this by their focus on House Forrester, a minor Northern house led by Gregor the Good, bannerman to House Stark. It’s definitely refreshing to interact with completely new characters (the House is only fleetingly mentioned in the books) that have a believable stake in the North. However, many references do require that prior knowledge. The episode begins with the Red Wedding from the new perspective of Robb Stark’s guests, camped outside the Frey walls. (Yes, this gut-wrenching moment is revisited.) There is other reliant material, such as mentions of a certain blonde boy-king and the significance of being exiled to Essos. So, whilst Telltale may consider the game playable for newcomers, it’s hard to say whether the experience would be a rewarding one if you have no prior familiarity with the story or its characters. 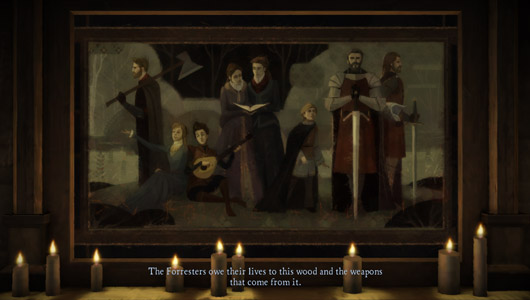 The Forrester’s are unique through their craftsmanship with Ironwood, the strongest wood in the Seven Kingdoms. This House is undeniably similar to the Starks; Mira, the eldest daughter of the Lord is (like Sansa) effectively alienated in Kings Landing, and has a close friendship with Margaery Tyrell. There’s also the Rickon-like younger brother in Ryon. There are definitely parallels, which is good in that the mood and traditionalism of the Northerners has been captured – the Stark honour has a presence in the decisions you make as a Forrester.

Another feature that has stayed true to the narrative of Game of Thrones is the multiple protagonists. You begin the story as Gared Tuttle, the son of a pig farmer who has worked to claim the place of squire to Lord Forrester. These new, ‘minor’ characters offer a new set of eyes to see events like the Red Wedding through; they reveal perspectives we have not before experienced. The ties amongst these characters make the transitions between them feel natural, both between Gared the squire and Ethan Forrester, the next head of the House, and again between Ethan and his sister Mira. Individual perspective narratives work wonders in the books, and continue to do so in both the show and in Telltale‘s take. From the outset, we are offered access to those characters we really wanted to see. 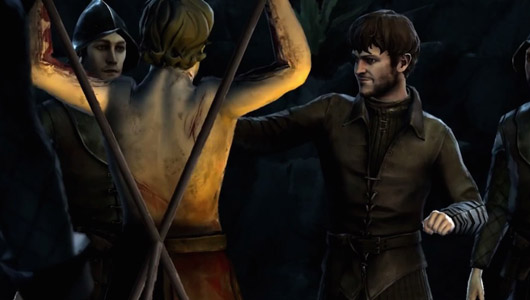 And see/hear them we do. Cersei Lannister and Ramsay Snow are amongst the cast members present, and the same actors voicing their characters provides extra layers of fan appeal. This is another reason why newcomers to the ASOIAF universe may lose out – it’s these representations that act as a main selling point of the game, the same way that the highlight of the Episode 2 teaser was a glimpse of Jon Snow.

Although, the character models are a bit hit-and-miss in terms of likeness – Natalie Dormer’s Margaery looks a bit too cat-like, whilst Peter Dinklage’s cartoon-ised Tyrion is brilliantly accurate. This is only a niggling issue, as Telltale generally win when it comes to art-style, and Game of Thrones is no exception with its oil-paint effect. Even small details, down to the style of text and quick-time cues suit the theme well. (The only exception is the colour of directional key prompts – there’s not much place for eye-catching vibrancy in this environment, and grey can be a bit disadvantageous if you’re seeking to avoid an incoming sword to the face.) 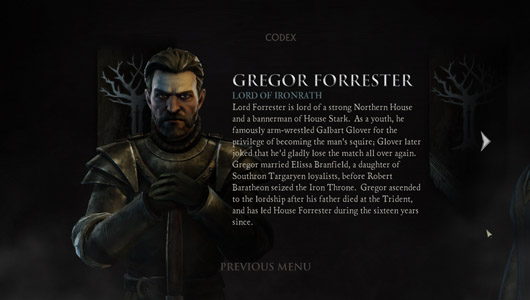 Another nicely designed feature is the Codex, a collection of bio’s that helps place characters you meet within the story. Not only does this feel a necessary feature – again, there is a reliance upon the player’s knowledge of the Game of Thrones world and its inhabitants – but it’s a very welcome one, given its great aesthetic. Even if you’re not too inclined to read up on each character’s family history, a brief peruse of this additional content is enough to see the attractive and characteristic Telltale art-style extends to all reaches of the game.

Then again, it’s likely you will be interested. Game of Thrones and its inspiration, the A Song of Ice and Fire series, is brimming with lore and backstory. It would be impossible to explore this fully within one interactive tale; yet another element that is transferred very powerfully is the weighty decision making and the need to navigate the political and social conflict that is rife in the Seven Kingdoms. This fits quite perfectly into the style of gameplay Telltale carry out so memorably. 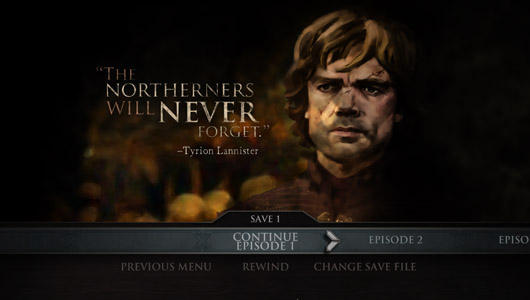 For a first episode in particular, the dialogue is tense from the get-go – one scene that felt considerably strained was Cersei’s questioning of Mira, who had the almost torturous option between denouncing her own family or openly confronting the queen. There are so many grey areas it’s almost absurd; there’s no sense of there being a ‘good’ answer, as on plenty of occasions when I attempted to select agreeable responses, the conversation went increasingly downhill. We know these characters, yet they remain unpredictable, providing us with our own experiences of teetering on the edge of conflict in the same way the show and books have portrayed.

The sense of near-impossibility in navigating this dialogue and choosing the better-worst option when making decisions is what has kicked this episode off to such a promising start. That which makes Game of Thrones so gripping – the intrigue, interactions and unpredictability of its characters – is captured extremely well.