Far Cry 3 was one of my favourite games of the last generation. It was a culmination of all of the gameplay tropes Ubisoft had been putting into their titles finally working in harmony with one another – a beautiful open world, a skill-based progression system, emphasis on exploration and properly dynamic in-game events.

Since its release, the loudest complaint I have heard levelled at Far Cry 4 is that it is not a big enough departure from its predecessor to be truly great. I simply cannot agree with this stance as I fall into the “if it ain’t broke” camp. What I see is a game that has iterated on the systems already in place and improving on almost all of them.

Set in the fictional South Asian country of Kyrat, the story of Far Cry 4 begins when Ajay Ghale returns to the country of his birth to fulfil his mother’s dying wish. Immediately set upon by the royal guard, Ajay meets the Himalayan nation’s eccentric king Pagan Min (brilliantly voiced by Troy Baker), who appears to know him – and his mother. Kyrat is in the middle of a civil war and Ajay is thrown into the middle of it when the rebels, the Golden Path, intercept and free him from Min’s palace.

The only major gripe I had with Far Cry 3 was the protagonist – he was never likeable. The people he wanted to save never elicited any feelings of empathy from me and, because of that; I could take or leave the story. Far Cry 4 gives us a character to root for. Ajay is never given a proper personality – he is simply a cipher for the player – but that allows you to become a ‘stranger in a strange land’ character. So you are rooting for yourself, because you are awesome!

His story is reminiscent of the ‘power fantasy’ journey taken in Far Cry 3. As the son of the founder of the Golden Path resistance group, Ajay is immediately taken in by the group’s current leadership. Sabal is a traditionalist, in the mould of Ajay’s father Mohan, who wants to see Kyrat return to its spiritual roots. Amita has more modern ideas of what is best for Kyrat. Stuck in the middle, Ajay is often forced to choose sides between the two. Do you decide to destroy the drug farms that fund Pagan’s army, or take them over for the Golden Path? Your decision will swing the balance of power within the movement’s leadership and will complicate things later.

In the midst of a civil war, Kyrat manages to be a beautiful, dangerous place. Split into two regions, the environment is breathtakingly huge. Southern Kyrat is made up of lush jungle and rivers, whereas northern Kyrat is closer to the Himalayas themselves so the landscape is more barren and cold. Once again, the local wild-life plays a large part in the game – either by providing hunting targets to upgrade your gear and earn money, or by becoming involved (through your intervention or not) in the on-going battles that pepper Kyrat’s landscape. 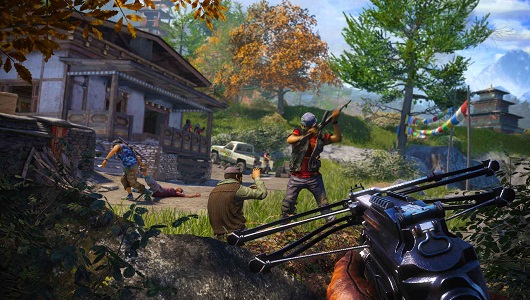 The world is further split up by bell towers dotted throughout the country that are used to pump propaganda messages to all radios in the area. One of the first tasks you must complete involves climbing a tower to hijack the radio and allow Golden Path sympathisers to take over the airwaves. Doing this unlocks that areas map, as well as granting you free access to weapons.

Just like the previous game, outposts litter the landscape. Liberating them allows you to remove the enemy’s influence in an area, making them less likely to appear. Additionally, you now get the option to replay outposts again and again using the Outpost Master, which repopulates the area and challenges you to liberate it more quickly and silently. Once freed, an outpost is not safe from enemy attempts to retake it until you take over the area’s fortress. These act as strongholds for Pagan’s lieutenants and provide a much tougher challenge to take down.

This is where the co-op game-play featured in the game helps greatly. When another character enters your game, they take on the persona of Hurk, an ignorant American mercenary with takes a shine to Ajay’s talents in dealing out destruction. While the joining player will not progress in their own campaign, they do get to keep any money and experience that they accumulate so it works out well for them too.

Outside of the main environment of Kyrat, you will also be tasked with completing missions in specific areas. Some missions will see you explore the Himalayas themselves, areas not normally accessible in the game. In some of the more ‘out there’ scenes in the game, you will explore Shangri La, a mythical land which has been invaded by demons. These can be some of the most enjoyable tasks in the game as they change up the normal experience by giving you a tiger companion and adding supernatural enemies to keep you busy. 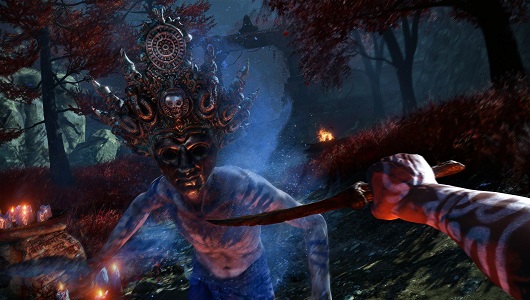 Side missions see you encounter some of the more colourful inhabitants of Kyrat. They will also provide you with some of the more unique experiences available in the game. Other jobs with appear at random in the game world too, allowing you to tip the balance of the war in your favour by hijacking supplies and killing ranking members of the royal guard.

As you progress through Far Cry 4, the game becomes more and more fun – which seems to be the opposite of what should happen. By upgrading Ajay’s abilities, you unlock different skills along two different trees – the tiger and the elephant. The tiger gives you combat skills like takedowns, while the elephant makes you more resilient, by increasing your health and upgrading your syringe-making abilities. When you reach the upper echelons of your skills, you will become a one-man army.

The core game-play still revolves around how you choose to approach any given situation. Do you choose the tag-enemies-from-afar/stealthily-approach-with-bow/pick-off-your-targets-without-alerting-the-others approach? Or do you instead choose the find-an-elephant-nearby/climb-aboard/wreak-havoc-on-the-entire-outpost option? The options are even more diverse than this but the important point is that each method you choose is fun. 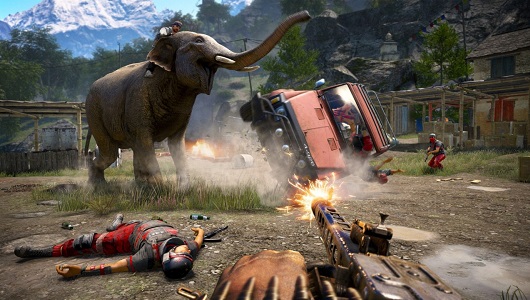 I mentioned that Ubisoft Montreal have iterated rather than revolutionised the Far Cry formula. As well as increasing the weapon count, the wild-life diversity and the map size, we have also got iterative changes to experience – for instance, when driving, clicking the L3 button turns on Autodrive. This allows you to freely aim your sidearm and take on enemy vehicles while in motion. It is just a small change but works surprisingly well – and Far Cry 4 is littered with them.

I have to admit that I only dabbled in the competitive multiplayer element of the game but what I saw was interesting. It is limited to five-on-five, with different game modes that cover the usual online types. What I found interesting was the fact that the two sides have different abilities – one group utilises guns and explosives, while the other uses bows, stealth, and wildlife to gain an advantage. I didn’t play long enough to determine how balanced this was but I liked the idea, nonetheless.

Kyrat is full of fun, diverse activities to keep you busy
The narrative choices add replayability to an already stuffed game
The off-map side missions are a breath of fresh air
People who disliked Far Cry 3 will not be convinced by 4 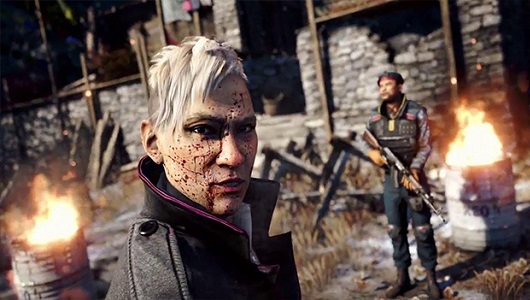 Far Cry 4 is by no means a revolutionary game. It owes a lot to its predecessor – no doubt – but little changes like the introduction of player choice to the story, more varied and unique side missions, as well as little improvements like Autodrive add a lot to an already great experience. This will probably not convert anyone who didn’t enjoy Far Cry 3, but Ubisoft Montreal have done well in sating my open-world hunger in the wake of lacklustre entries like Assassin’s Creed Unity and Watch Dogs.