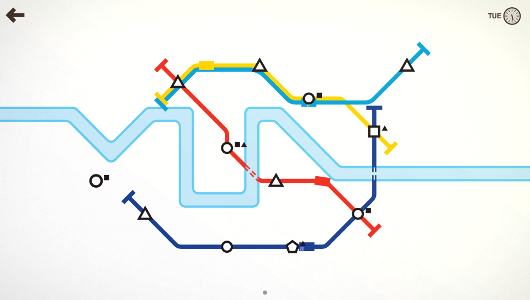 One of the most popular game-play mechanics at the moment seems to be ‘perma-death’. Games like Spelunky, Binding of Isaac, Rogue Legacy and DayZ are built around this very feature.

Mini Metro is a a minimalistic subway simulation game that uses that same ‘perma-death’ appeal – though not quite. As there is no ability to save your progress, the game gives you one shot at building and maintaining a subway system. The game still has a sense of progress, your top score, total passengers delivered and total days of operation will be saved and displayed in leaderboards in the final game.

Speaking of the game being final, it’s currently in Early Access development. The developer Dinosaur Polo Club, mainly the two brothers Robert and Peter Curry, have been working on the game since April 2013. Peter Curry was gracious enough to let me bug him with a few questions about the game, excerpts of the interview will appear throughout this preview.

Before the two ever thought about Mini Metro, they were just looking for game ideas they could realise without an artist. “One concept Robert suggested was navigating a subway map – he found that when he was in London he enjoyed going over the tube map and find the best route to take”.

Around this time, they entered Ludum Dare 26, a game jam with a minimalism theme. Instead of navigating through an already-built subway system, they changed the game to building your own. “That resulted in our entry Mind the Gap, which is still very recognisable as Mini Metro’s prototype”. 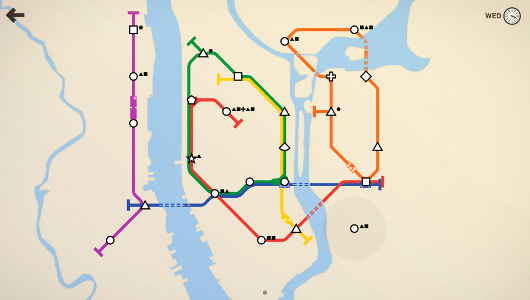 The appeal of the game is its simplicity. At the beginning, you start off with a square, a triangle and a circle. Connecting these shapes build your line and puts one locomotive on it. Next, shapes will appear at the station – these symbolise your passengers. Each little guy needs to go to a station with the same shape. As the game goes on, more stations will appear on the map.

At the moment, the game has two different game modes, Commuter and Scenic, which play a bit different. The focus playing Commuter is to keep your system running at all costs, even if that means people have to wait for a while at their stations. As long as not too many people wait for the a train, it’s fine. To help fight these crowds, you get upgrades every in-game week. A locomotive is ensured and you get to choose between a new line, carriage, bridges or tunnels, depending on the city. As only two of these options are available randomly each week, waiting for a specific upgrade is always a gamble. Once people have to wait too long at any station the game ends and you get to see your score and to take a screenshot of your finished creation. 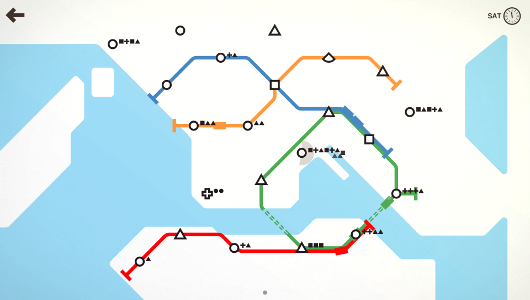 The balancing of the game is something the developers have worked on for a long time. It was “very difficult. As the player is destined to lose eventually, it’s been hard to find the ideal difficulty ramp”. Despite the game’s lack of tutorial, if you don’t do anything for a while, a cursor will show you what you could do – it always feels fair. For the first few hours it won’t be the game’s fault you’re failing, it will be your own.

For those who want to relax a bit more and gaze at their beautiful subway lines, Scenic mode is perfect. But fear not, it will still be challenging in its own way. Your passengers are super relaxed and will wait forever at their stations for a train to get them – but you don’t want that, of course. Scenic rewards you for being as efficient as possible. The game rewards you with upgrades as soon as you hit certain efficiency milestones, documenting your passengers per day. It’s incredibly rewarding to tinker with the lines to make them run like clockwork. I found myself tearing down my entire system and rebuilding it from scratch with the hope it will run better.

Another mode, unavailable at the moment, is Rush Hour. The developer Peter Curry promised it “will be more challenging, but also quite a different game to Commuter. The game will likely be significantly shorter”. 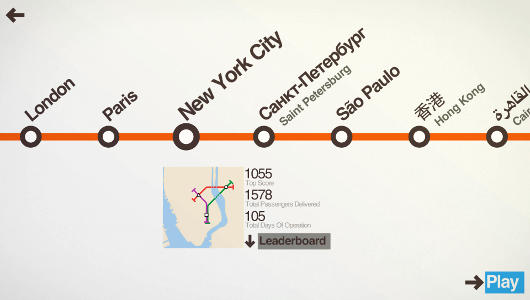 The game is, as I mentioned before, currently available in Early Access and upon release, will be available for mobile devices as well. Releasing Mini Metro on Steam was the right step in the developer’s eyes, as the game features “no fixed narrative to spoil, just endless systemic gameplay”. Even before the game was green-lit, it was available for the public – a pre-alpha version was available since September 2013. A big change for the small company was the feedback from the Steam community. The developer gets “a lot of city suggestions [and] ideas about different game modes”; to get the community what they want, a map and scenario editor will be added post-release.

Even without the user-generated content the game has enough to offer. Each of the ten available cities, Paris, London, Saint Petersburg – just to name a few – looks and feels different. The developer would “love to add more cities and increase [their] geographic spread, but [they]’re concentrating on making each city unique and interesting”. Comparing the finished subway lines in the game with the actual ones can be done. They aren’t quite the same, as the team at Dinosaur Polo Club “chop[ped] and chang[ed] them as required to make each city play interestingly”.

Although the game is still in Early Access, I can highly recommend it. With two completely different game modes and ten playable cities, the game features tons of fun, for a low price. The beautiful art style can be enjoyed by everyone, at any time – with the night and colour blind mode the game offers. If you’d rather play a game like that on your phone or tablet, than fear not, just wait until the targeted launch in early 2015.