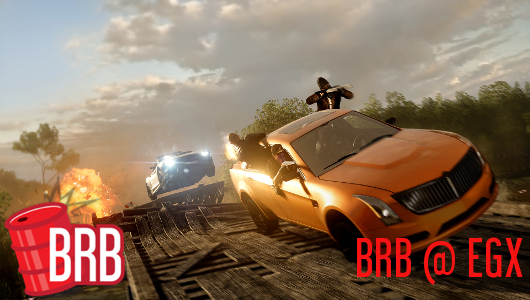 For those of you who keep track of games being delayed then you’d possibly know that Battlefield: Hardline was due to release no more than 4 weeks from today. In a bold move, EA decided to delay Battlefield: Hardline to an undisclosed date in 2015 as they felt the game wouldn’t be ready or in a decent playable state.

This past weekend I got to go hands on with Battlefield: Hardline at EGX playing the new multiplayer mode called “Hotwire” on the “Gator Alley” map. Being a big fan of the Battlefield franchise, I had a lot of fun, but I am more than glad that Battlefield: Hardline was delayed based on a few noticeable problems in the build of the game I played. 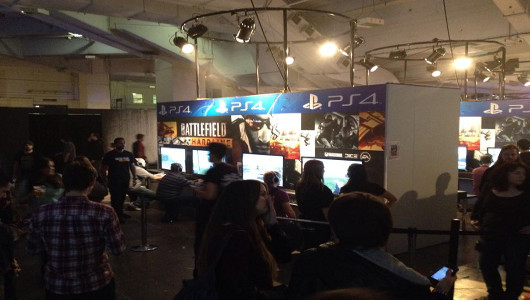 As I took my place at the console I was playing on there were immediately some comparisons that I could draw to previous games in the franchise. The loadout/deployment screen is similar to Battlefield 4 at face value, with the four classes being renamed Operator (Assault), Mechanic (Engineer), Enforcer (Support) and Professional (Recon). Each class serves a similar role as in Battlefield 4 – and Battlefield 3 to an extent – with a few new gadgets thrown into the mix such as the frankly overpowered and broken auto injector which immediately revives you upon death.

One of the developers explained what Hotwire mode was. Essentially there are five vehicles on the map which each team – cops and crooks – need to control in order to bleed the other team’s tickets and win the game. To be completely blunt, it’s conquest with moving capture points. I deployed as an Operator – a good all round class – whilst the other 31 players I was in game with geared up too. I was on the cops team and immediately jumped into a squad car, fired up the sirens and made my way to the nearest vehicle which needed to be controlled. As it turns out the vehicle I was attempting to hotwire was a truck/tanker combo and a couple of the enemy team also had their eyes on it.

It was here I noticed the gunplay is almost identical to Battlefield 4 and I picked it up very quickly. I did notice some prevalent issues with netcode at large in this moment – namely I gunned down one of the enemies who I’d acknowledge was around the corner of the sedan himself and his squadmate rolled up in. This was where I started to worry, had any lessons been learned from Battlefield 4’s shocking launch at all or was I playing a build of the game which predated the netcode being patched in Battlefield 4’s community test environment? 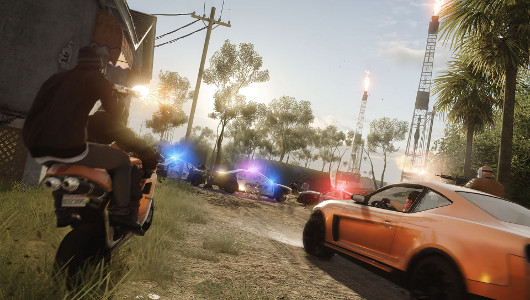 Regardless I jumped into the tanker and began to drive like the wind; a couple of my teammates had control over other objectives such as a muscle car and a motorbike. I started being chased by a hostile sedan who took pot shots at me in the hopes of slowing me down. Not a chance as I ploughed through a couple of their teammates on a bridge with what looked to be a ramp. I took my chance and decided to go for a dramatic “Only in Battlefield” moment when my tanker became stuck in the geometry around the ramp and the bridge and I was promptly gunned down by the enemy.

This wasn’t the only occasion I noticed vehicles get stuck in various objects in the few play sessions I had with Battlefield: Hardline. There were sedans and bikes stuck in trees and a van wedged into a corner with a police patrol car wedged beneath it. I get the impression that Gator Alley might not have been the best map to showcase Hotwire mode on. The map design was good, with wide open spaces and narrow passages which promoted fun gunplay. Whilst I did get into a few good car chases, they promptly came to an end when I was funnelled into an area littered by discarded vehicles from both teams who were more content to fight it out.

I get the impression that the original map which we saw at E3 – set in the streets of Los Angeles – would be a much better setting for high speed chases.

Vehicles have been buffed since the beta on PlayStation 4 and PC back when E3 was in full swing, where they no longer blow up after being shot with one magazine from an assault rifle. If you want to stop a vehicle then you’d better start aiming for that driver.

I have to say one of my favourite returning features from Battlefield: Vietnam and BFBC2: Vietnam is the fact that all the vehicles have radios inside them. Every time you jump into a vehicle you’re treated to a different track, adding to that cops/crooks fantasy the game is attempting to realise. 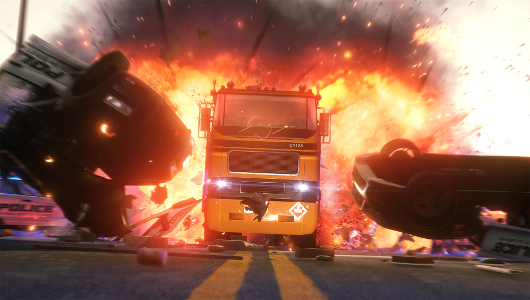 One thing I’m not a fan of however is the departure from the high octane cop drama that Visceral Games have been so intent on properly portraying. What I mean by this is that the abundance of RPG’s littering the map as battle pickups isn’t really grounded in reality. I could understand having one on the map which spawns infrequently, but when I’m playing as a crook I don’t necessarily want to be confronted by two or maybe even three cops wielding RPG’s, because that’s madness. Get some double barrelled shotguns or dynamite on Gator Alley as battle pickups instead of masses of RPG’s and I’ll be content.

There’s absolutely no denying that I had a lot of fun with Battlefield: Hardline and the improvements and feedback which have been implemented since the reveal back in June are great. However, if the game was still launching in only a few weeks from what I just played, I’d be worried. It needs polish, it needs balancing and it needs to be grounded in reality a bit more. EA cannot afford to mess up Battlefield: Hardline after the shambles that was Battlefield 4. Whilst Battlefield 4 has made massive progress into becoming a polished game, it took a bit too long to get there.

EA, Visceral and DICE have time to polish Battlefield: Hardline to make it a game people will want to pick up on day one. But if it stays in the state that it is now with no improvement then there’s going to be some massive problems on their hands.