I still consider Velocity Ultra to be one of my favourite games on the PlayStation Vita. It suited the platform perfectly; it utilised the control features of the device well, consisted of short, quick levels or objectives and always had another goal to achieve. Even outside of the Vita version, the game was a triumph, as Rik attested to in his review.

With the impending release of Velocity 2X, I was eager to see what more FuturLab could add to the formula. Based on their recent comments, they were gunning for this game to reach Game of the Year levels of critical acclaim – I can only speak for myself obviously, but I believe they did just that. 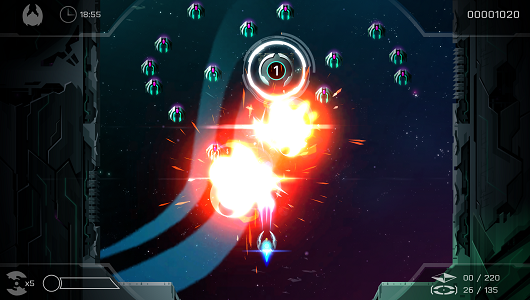 Velocity 2X continues the story of Lt. Kai Tana, the head-strong pilot of the experimental Quarp Jet. Finding herself in an unknown corner of the galaxy, surrounded by hostile aliens known as the Vokh, Kai must escape their clutches with the help of the timid Ralan – a member of the slave caste known as the Jintinda. Pursued relentlessly by General Glaive, Kai must rescue Jintindan scientists and collect valuable resources in order to allow Ralan to develop a method for getting her home.

Building on the solid foundation Velocity and Velocity Ultra provides, the biggest change FuturLab have incorporated into Velocity 2X is platforming. Prior to release, this was probably my biggest fear for the title – the series has always excelled at being fast and frantic (hence the name, I’d guess). If the platform sections slowed down the gameplay too much, it would have completely unbalanced the experience. 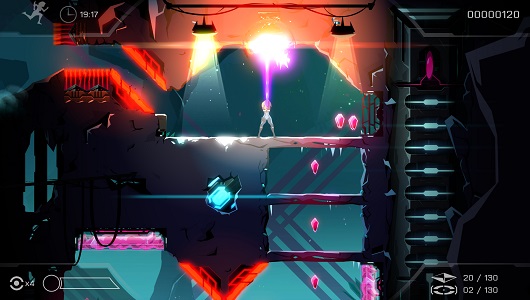 As you can guess from the score above, FuturLab have not fallen down that particular rabbit hole – instead, the 2D platforming sections feel just as frenetic as the ship-piloting sections. Once you get a handle on the controls, sprinting through areas, bounding over hazardous gaps, shooting mineral deposits and switches while teleporting through solid walls becomes a graceful dance. 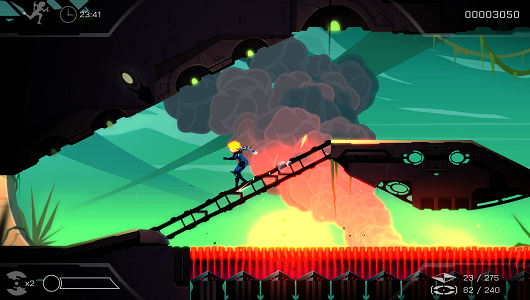 Like any well-designed game, the controls are disseminated to you at a deliberate pace. Just as you begin to master one new element, another is ready to mix things up even further. For instance, shortly after the start of the game, you are taught how to teleport from one part of the screen to another. Later levels then require you to teleport back to an earlier section of the level so you are given the ability to drop telepods, which act as user-created checkpoints.

Another new aspect for 2X is the boss fights. You will encounter General Glaive on a number of occasions, with each time requiring a new method to defeat him. One of the more imaginative battles requires you to weaken his defences before flying into his ship to take it down from the inside. The game itself features a decent variety of mission types, ranging from Search and Rescue, Hostile Forces to Critical Urgency – these boss levels added to this variety. 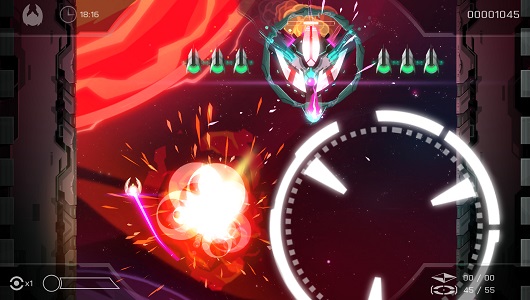 Moving from the PlayStation 4 also allows FuturLab to expand on the visual side of the game. 2X looks lush – like the previous game, it relies on various colours to relay information on switches and enemy types. However, this also means the game is vibrant. When moving through areas at speed and causing general mayhem on screen, Velocity 2X becomes a cacophony of colour and light. This same vibrancy extends to the once-again stellar soundtrack from Joris de Man, which evokes a nostalgic quality in the game through retro sounds.

As I was playing through the game, I found the Cross Save functionality to be a great boon for the game. Playing through a series of missions on the train home, uploading the save in a matter of seconds before being prompted automatically to download the latest cloud save just felt effortless. It was during my time with the game on the Vita though that I realised how much better the game still is on the platform. Compared to using the square button and the left analog stick to teleport on the PlayStation 4, the Vita version’s touchscreen teleporting is far easier to use.

Thankfully, with Velocity 2X launching on PlayStation Plus’ Instant Game Collection on PlayStation 4 and the game being a Cross Buy title anyway, you will get the benefit of both versions for no extra cost. FuturLab have crafted a truly exceptional title here, deserving of all the praise it gets. I mentioned their aspirations for Velocity 2X earlier – right now, with some big games yet to come in 2014, it is my current game of the year.

Now I just need to get started on Perfect-ing all 50 levels.