The first time I saw footage of CounterSpy, it reminded me of Brad Bird’s The Incredibles. It therefore wasn’t surprising to learn that the developer, Dynamighty, is made up of former Pixar and LucasArts alums. The tepid reviews I saw upon release made me reconsider my day-one purchase but after a rush of blood to the head and a good deal on some discounted PSN cards, I decided to get my spy on anyway – and I’m glad I did.

CounterSpy is set in a Cold War-era alternate world where the Imperialists and Socialists are racing towards a slightly different type of arms race. Instead of threatening to launch nuclear weapons at each other, both nations have set their sights on the moon. If you are conjuring up images of Gru from Despicable Me right now, know that you are not alone!

You play an agent of C.O.U.N.T.E.R. – a covert organisation intent on stopping the needless destruction of the Earth’s only natural satellite. In order to stop the plan in its tracks, you are tasked with collecting intel items like launch plans and design specs from both sides of the conflict. Once each piece of evidence is garnered, C.O.U.N.T.E.R. can then determine how exactly each side plans to execute their strategy and come up with a scheme of their own to subvert it.

The moment-to-moment gameplay switches between two distinct modes. The first is a 2D platforming stealth mode, mixing elements of Mark of the Ninja with Metal Gear. Guards are dotted throughout each level and if they become suspicious, a ‘?’ appears over their head and they begin to investigate further. If they then spot you, a ‘!’ appears and they begin to call for support. Cameras can also detect you and these are colour-coded – the cameras with a green view area can be taken out with a bullet, but the armoured camera, with an orange view area, require explosive damage to be put out of action.

The second mode changes the game into a cover-based shooter; however, switching to this view can only be done at designated spots on the map, normally indicated by a yellow-and black-striped design on objects in the environment. Once in this view, a wide, circular reticle appears which is controlled with the right thumbstick – this shows the general area you are targeting. Once you are ready to take down an enemy, holding down the left shoulder button narrows the reticle to a point, allowing you to squeeze the trigger with the right shoulder button. 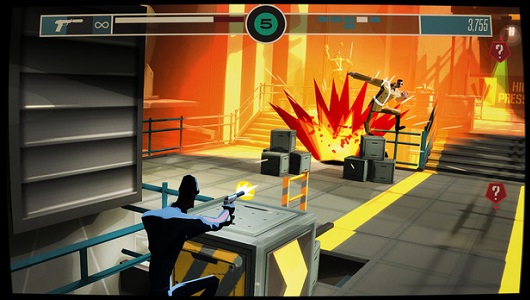 The main problems with CounterSpy revolve around each of these perspectives. As you cannot control the viewing angle, it is possible for you to be spotted by enemies off-screen. You either have to run in their direction to find out where they are exactly before shooting them or find cover (which may not be conveniently placed) to expand your view of the area.

The levels of the game are randomly-generated so each time you play a level, its layout is different. Enemy positions and collectible locations all change so despite the fact that you will spot the recurring building blocks here and there, each situation feels different. The downside to this though is some of the geography can get in the way of the gameplay. There were times when I needed to attack an enemy while behind cover, but the view was restricted, either due to geometry in the environment, or via the HUD itself. 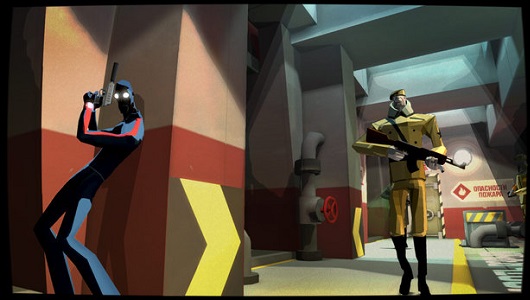 Replayability is obviously the biggest advantage from randomly-generated levels and this is certainly the case here too. As well as this, unlocking blueprints to build new weapons and develop new performance-enhancing formulas also helps to add to the game’s longevity. A single playthrough can be completed within a few hours but unlocking all of the items can require multiple game completions.

The weapons range from silenced pistols to launchers that fire sticky explosives which are set off by nearby gunfire. I had particular fun with that last one, setting up an encounter with numerous explosive blobs dotted throughout the area and then firing a single shot to draw the ire of nearby enemies – James Bond-esque genius at play. Ammo needs to be replenished between missions as do the formulas, which last for one mission. The enhancements vary from the ability to temporarily fool cameras to increasing your resistance to bullets and explosives, from when missions go from 007 to 006. 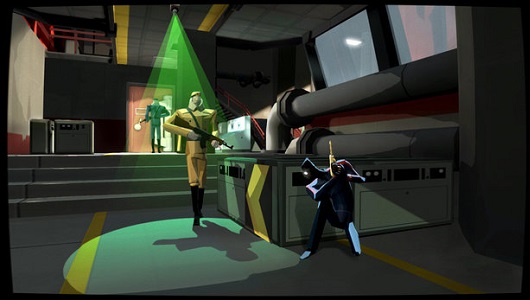 If you die during a mission, or fail to take out a guard before he completes a call for help, the DEFCON level of the particular nation lowers. If it reaches 1, you must finish the mission before the countdown completes and the missiles launch. Dotted throughout the various enemy bases are officers, denoted by their uniforms. If you succeed in taking out all of the enemies in an area and leave only the officer remaining, you can get him to raise the DEFCON level back up by holding him up at gunpoint. You are notified when choosing a base to attack what items are located there and how many officers there are. With DEFCON levels being persistent, if you are about to take on a new mission and the nation in question has a DEFCON level of 2, with no officers present; you might want to reconsider that choice.

You have probably noticed from the screenshots so far just how appealing the art style is – the angular character models, minimalist environment design and stark colour scheme show off the 60’s spy thriller vibe brilliantly. What you won’t be able to tell from the screenshots is the fact that the soundtrack is surprisingly good too. I caught myself swaying my head and tapping my feet numerous times throughout the game. 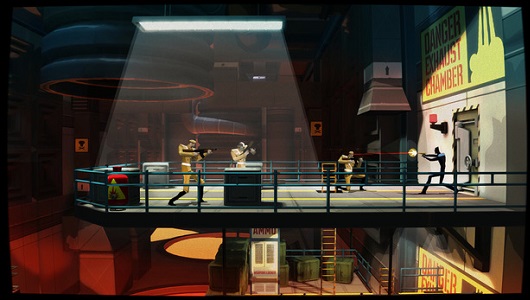 It is a shame that some of CounterSpy’s gameplay mechanics throw up some frustrating issues as the rest of the game is a joy to behold. The visuals are gorgeous, the music is pitch-perfect and some of the game’s cheeky humour had me smirking knowingly. Despite the issues I raised, I enjoyed the game quite a bit and would recommend it to anyone with some PSN credit burning a hole in their virtual pocket. A sequel that takes care of the faults in perspective could be a classic – get on that, Dynamighty!