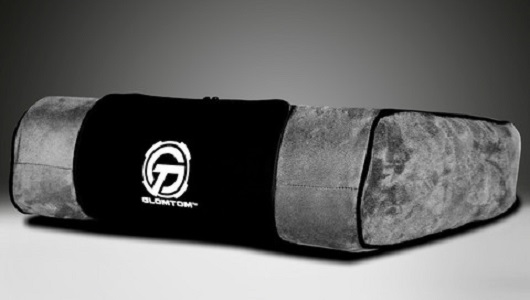 [N.B: While the writer of this article did/does not know him on a personal level, Clif “8BitBass” Chambliss, the creator of this hardware is a colleague that a number of us from Big Red Barrel used to work with during our time at Sarcastic Gamer. It should not make any difference to Diarmuid’s opinion – and he did buy this product himself, but we thought we should make that clear. We also wish our old pal 8BitBass a lot of luck after his successful Kickstarter campaign! – Tim]

I am a ‘couch gamer’. After coming home from a long day at work, I often throw myself in front of the TV and either lazily watch whatever’s on or turn on a console to play whatever game is currently on my ‘to-do’ list. This is the main reason I prefer console-gaming to the PC alternative. My PC is at my desk, with a comfortable but still restricting office swivel chair parked in front of it.

Like most of you reading this, I never thought I was in a particularly uncomfortable position when playing on my couch. I spent 24 hours on it last year for Extra Life and numbed my backside a few times but that was all for the cause. It was not until I saw a Kickstarter for the Glomtom that I thought about how I play games in front of the TV.

I will be the first to admit that I normally only support Kickstarter projects that come from already established groups, like Mighty Number 9 or Harmonix’s Amplitude remake/reboot. This may sound counter-intuitive, based on the purpose of Kickstarter itself, but I find it’s the safest option. However, the Glomtom Kickstarter is the first one I have backed where the company in question was a start-up. The reason I felt comfortable doing so was I knew of Clif Chambliss from his work with Sarcastic Gamer and always appreciated his hard work and personality.

The initial $9,500 goal was reached and surpassed so I awaited my delivery. It arrived just over a week ago and since then I have been using it continuously. The basic make-up of the Glomtom is simple – it is a foam pad, shaped like a 2D outline of a tooth, covered in polyester with a storage pocket located at the front. 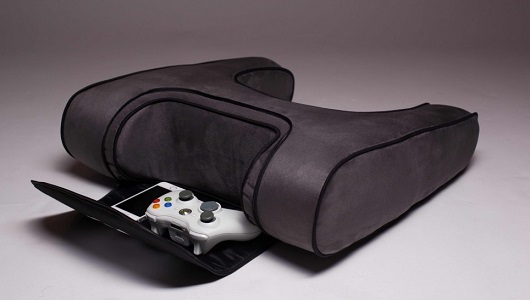 I suppose the biggest question is: does it make a difference? The answer is a resounding yes. For such a rudimentary device, you might think the benefits would be minimal but some of the best ideas are also the simplest. Using a Glomtom makes playing video games on a couch or armchair ridiculously comfortable.

After starting a few play sessions over the past week, I felt there was something wrong. It was not until I realised that I had forgotten the pad that I appreciated the genius behind it. There are videos which Clif has made that show off its use by the public. The sense of unease you get when the Glomtom is removed is not artificial – there is a genuine discomfort felt when you are not using it. It is reminiscent to those times you leave your phone behind – you immediately feel, for want of a better term, naked. 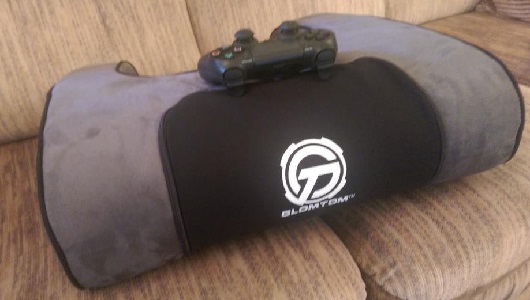 I would recommend this device to anyone. Using a phone or tablet while in a seated position is easier with it, as is using a laptop away from a desk. In fact, I can see its uses expanding beyond the living room too. Long car/bus journeys would be made easier with a Glomtom in your lap and a Nintendo 3DS or PlayStation Vita with you – though I have to admit, lugging a large foam pad around may impact your coolness factor.

For a device so aimed at ergonomic functionality then, it is disappointing that there are a few niggles with its comfort. Firstly, the area which wraps around your midriff is sewn with a rigid seam, top and bottom. While this allows the Glomtom to keep its shape, when adjusting your posture or leaning forward, the seam can stick into your abdomen and cause a slight bit of discomfort. The zip used to open and close the storage area is also uncovered. I found the outsides of my wrists were chafing against the zip during game-play. This is especially odd as the zip used to close the polyester cover on the Glomtom is covered. 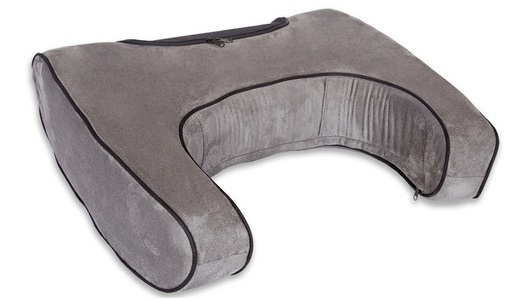 Adds immensely to the couch gaming experience
Feels well-made, with a premium quality to it
Can be used with multiple devices in multiple locations
A few design niggling issues

The Glomtom is a clever device that solves a problem you probably did not know you had. Despite the previously mentioned issues, the ergonomic advantage gained from having this device cannot be understated. During use, my forearms are fully supported and I am not slouching in my seat so my back is in the right position. I also use the Glomtom during regular TV now, with my phone perched on top of it.

Currently, Glomtom’s are only available to purchase if you live in the US, however that should be changing soon. When it does, go for it.

This item was purchased by the author.
Official Game Site