I was recently invited to attend a BAFTA Games Showcase near Piccadilly Circus. The game on show was the independently-developed Bedlam – a subversive first-person shooter from one of the UK’s many indie development houses, RedBedlam. While I was initially unaware of the title, what piqued my interest was the fact that Bedlam also has a companion novel, written by established author Christopher Brookmyre.

With titles such as Quite Ugly One Morning, A Big Boy Did It and Ran Away and All Fun and Games until Somebody Loses an Eye, the tone of Brookmyre’s work is relatively self-evident – and Bedlam appears to follow suit. Mixing satire and black humour together, the novel tells the story of Ross Baker, a scientist at Neurosphere, who inadvertently becomes trapped in an old video game. The game, on the other hand, tells the story of Athena, a woman in a similar predicament.

Taking control of Athena, you wake up in an oddly familiar world. With gameplay similar to Quake II, Bedlam starts with you exploring this futuristic landscape with dumb grunts popping up every so often to try to slow you down. As you progress towards the goal, the screen begins to glitch and Athena remarks that it almost looks like the game’s graphics engine is struggling. As you move towards the anomaly, you are then transported to another area where you pick up an over-powered crossbow. Moving back into the sci-fi landscape you just left, you can now take on the alien hordes with a medieval weapon! 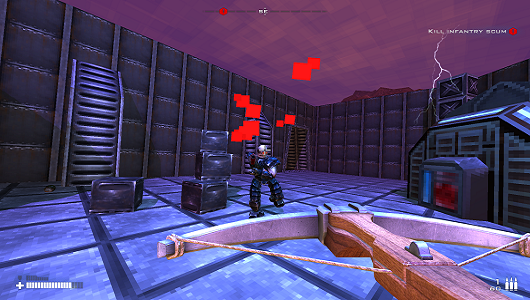 To say this game does not takes its genre seriously is an understatement. During the presentation, the producers of Bedlam, Nick Witcher and Kerry Fraser-Robinson, mentioned that what drew them to Brookmyre’s work was his irreverent writing style and humour so it made sense from the start to incorporate this into the game itself. For instance, the opening moments introduce you to a commanding officer who orders you to salute him. Pressing the button prompt ends up decapitating him as you clearly do not know what you’re doing yet.

The style of the game harkens back to the first-person shooters of the 90’s, like Doom and Quake. The panel mentioned their shared love of the genre and their shared disappointment that the fun and humour that once existed in the FPS’s of old seemed to be gone from AAA game development. These similar opinions led them to take a more satirical look at the games of their past and tell the story from a perspective seldom seen in the FPS genre – that of a woman. 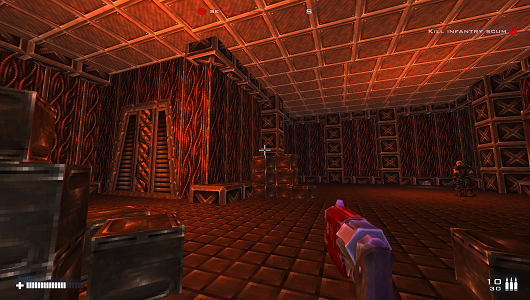 The event was also used to announce that the two main voice actors for the game will be Kirsty Strain and Robert Florence. While we didn’t get to hear their work at the presentation (the vocals being provided humourously by Christopher himself), we were assured that the early-access release available on August 8th would include the Scottish comedy duo’s work.

As the demo progressed, Athena was transported to a war-torn location, again familiar from the book. Immediately, the game’s humour showed itself – we passed by an abandoned café called Café Teabag – and once again we were shown the game’s irreverence towards its own internal logic when Athena proceeded to mow down the World War II era Nazis with the combination of modern-day light machine gun and a laser blaster. 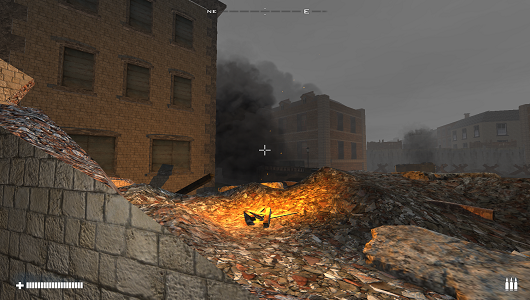 Witcher and Fraser-Robinson discussed the game’s later levels, detailing how as you progress through the story, you will start to move through gaming generations. Not only will the visuals improve and you weaponry become more varied, but enemy AI will become more intelligent and adaptive.

Due to the wide appeal of Brookmyre’s work, the developers also mentioned their purposeful level- and gameplay-design. Knowing that fans of the books may not necessarily be gaming enthusiasts, RedBedlam have designed the game to ease players into the experience without impacting their story. For instance, when Athena first arrives, the aforementioned grunts have the accuracy of Storm Troopers and do not seek cover.

Releasing the game via Early Access was also brought up, with the RedBedlam representatives singing its praises. They mentioned how fan feedback has shaped a lot of their previous works and Bedlam would be no different. Unafraid of mentioning the ‘F’ word, Brookmyre also said that listening to this feedback would help him plan out the other entries in the Bedlam franchise.

By the end of the presentation, it was clear that Bedlam is being positioned as a tonic for gamers who wish to add a bit more humour to their lives. Sitting opposed to the overly serious war simulators released every year, RedBedlam have set out to create an experience that lives both on the screen and on the page as a satirical, yet nostalgic, look at the titles that shaped our gaming past – and possibly will revitalise our future.