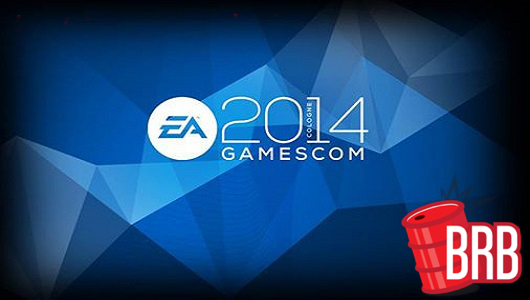 EA are already well into their current-gen debuts, most recently with EA Access, a subscription service currently exclusive to Xbox One that will provide players with reduced rates and early access to upcoming EA titles. There’s been a lot of talk about this new feature, and EA will definitely be looking to push a collection of enticing games that will make EA Access a privilege players will want to partake in.

Their big name titles were definitely off to a good start; first off was yet another look at Dragon Age: Inquisition. Bioware’s claim that Inquisition was their biggest game to date was looking promising with a reveal of “Dragon Mire”, a thunderous landscape that was the setting of this rescue mission. The concept of Dragon Age: Origins as a spiritual successor to Baldur’s Gate became apparent here, with a look at the tactical camera mode, the presence of which was only on the PC version of Dragon Age: Origins. The opportunity to think out the positioning of each of your characters was something that should hopefully prove very valuable in future, and could change up the style of play between role-playing and tactical nice and intuitively.

There is going to be “over 200 spells and abilities” available for your characters to master, the likes of which look quite fantastical in the combat shown. The primary RPG elements are clear, and a look at the Inquisitor’s Keep and War table suggest your path through Dragon Age: Inquisition is under your control within this “next-generation RPG”.

We’ve seen a lot of valuable pre-release content of this game. Next, there was The Sims 4 with live game-play that perhaps wasn’t as essential, yet provides a few more peeks at features that should be enough to excite any fan of the franchise. Build Mode was looking super speedy and user-friendly with different levels of customisation that work for a budding architect as well as the more impatient builders out there. For the first time we can pick up and move an entire building from one spot on the lot to another, an extremely useful feature that cuts out the mental-mapping of your new abode – gone are the days of plotting your house, garden and driveway before you’ve even put up walls. A lot of the new innovations weren’t exactly game-changers, arguably being significant yet simple enough to already be incorporated into The Sims; even so, it’s likely players will want to delve into all area of The Sims 4, thanks to this new simplicity rather than favouring one element of this open game, be it building new creations or designing the Sims themselves.

Whilst this gameplay wasn’t all that exciting, the announcement that a Create-A-Sim demo is now available was a clever ploy by EA, surely helpful in bumping up those pre-orders. Admittedly, after marvelling at the animations and playing around with the customisation options (although sadly, without The Sims 3‘s Create-A-Style mode), you’ll want to drop your Sims into a game and see what they get up to. Well played!

Onto the sporting side of EA’s conference, FIFA 15 had plenty of new content to show off along with what appeared to be solid technological improvements. With the game feeling “more responsive  than ever before”, the fans’ concerns seem to have been used productively; The Turkish Super Lig has been added due to fan demand, providing 18 new teams to play as well as the inclusion of football’s new goal-line technology. This is exciting news for FIFA fans as EA Sports have an updated contract with the Premiership League that should make the game’s players and teams even more true to life. FIFA Ultimate Team now also let’s you sign players on loan, which sounds great for those wanting to test and experience top players.

A strong focus of this year’s FIFA seems directed towards rebuilding goalkeepers “from the turf up” to be more lifelike, with new keeper animations and reactions to goal attempts. This looks to be refreshing from both sides as the footage showed here suggests more realistic opportunities for the attacking team to score, such as shooting between the keeper’s legs before he can read and react to the situation.

Up next was a brief look at Star Wars: The Old Republic‘s upcoming expansion. The game, now free-to-play after its poor response upon release have apparently taken on board player feedback in its updates and additions over the past year and a half. Here we have an announcement of the Galactic Strongholds digital expansion, with early access available from August 19th. This expansion will provide a space to call home, your character’s base that can be customised and decorated as you wish. There’s not really a huge amount that can be said for these kind of additions – players usually seem to love or have little interest in a personal home/meeting space particularly in the social expansiveness of an MMO. Still, the new Guild Flagships appear a good incorporation and may be a worthy feature for current groups of players.

A yet briefer reveal was that of Dawngate, a brand new MOBA from developer Waystone Games. Dawngate promises a more flexible and player directed experience with your own choice of map, character and build each time you play, perhaps trying to provide a more personal style compared to current giants of the genre like League of Legends. This game seems to be emerging into the online scene successfully as it is announced here that Dawngate has opened European servers given the positive reception it has gained in this part of the world.

Next, a brand new reveal from Bioware is enough to perk everyone’s attention as we are treated to a first full look at Shadow Realms. This story-driven multiplayer 4v1 game appears very fantasy orientated and its inspiration being classic pen-and-paper RPG’s sounds very promising, given Bioware’s reputation as storytellers. Players can journey through the online-only Shadow Realms with friends, one of whom can play as the Shadowlord, a hellish monster that looks to suit a traditional dark fantasy story. There’s a great deal going on here; an online-only multiplayer experience, options to play as the main enemy, a strong RPG and storytelling experience that will play out over an episode-like pace. 4v1  seems like a popular choice at the moment, and it will be interesting to see how Shadow Realms plays out – perhaps some announcements over the next few months will help us pin the game down more clearly.

Last but definitely not least, Battlefield Hardline brought EA’s conference to a close with a close look at the campaign as well as a peek at two more multiplayer game modes. First off is an announcement of further beta testing to come; we know the game has been set back to 2015, and unfortunately we hear nothing of release dates. Nevertheless, the mission structured campaign looks encouraging with traditional linearity apparently being replaced with more choice-dictated gameplay, interesting for a leading action title. Nick Mendoza is the protagonist, and his cop backstory makes for some interesting combat options and the possibility for non-lethal outcomes, such as being able to “freeze” enemies, forcing them to raise their hands, and using alternative weapons such as the taser gun. It fits nicely with this characters profile and looks like it will provide some alternative challenges.

The multiplayer game mode “Hotwire” seems appropriate, the reveal showing high-speed car chase action and traditional cops and robbers gameplay. “Rescue” is a more “eSports focused” game mode, where hostage rescue is the aim yet you’ve only one life per round, thus looking very intense and fast-paced. Hardline seems shaping up to tick both the multi and single-player boxes.

And that rounds off EA’s showcases at gamescom this week, with a fuller insight into their anticipated titles that we can grab later this year as well as a few reveals to consider for 2015.