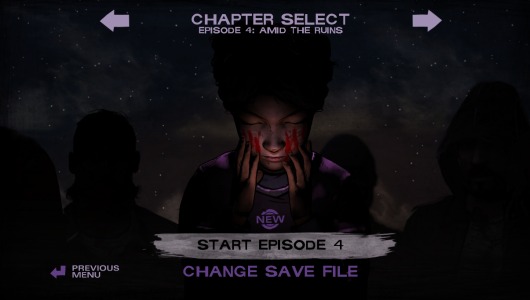 Review: The Walking Dead: Season 2: Episode 4 – Amid The Ruins

After several anticipating months diving back into The Walking Dead universe, be they filled with walker hordes, some morose looking-landscapes and antagonistic villains, it is almost at an end; we have reached the penultimate episode of Season Two. We see all of the above elements thrown into the mix during Amid the Ruins, as we continue the escape into danger immediately from Episode Three; and whilst individual boxes on the list of The Walking Dead‘s brilliant features are ticked, the sense of impending closure is absent from this episode, leaving an altogether weaker installment due to patchy pacing and looser storytelling compared to its predecessors.

Fortunately, a weak-link in the chain of compelling episodes we’ve seen so far has been part-repaired with a better look at some characters that previously were just another face in an oversized crowd. Rebecca, a pregnant survivor who has been a bit of a question mark given her suggested past relationship with the group’s main adversary, shows more of her present humility here, as she expresses herself to Clementine and behaves more protectively over her unborn child. Luke, who probably has the friendliest track record, reveals a little more of his personal side in how he attempts to deal with the outbreak, yet still unfortunately remains the kind of character you easily forget the name of; he’s a forerunner of this cast, yet his biggest strength being that of a kind hand to Clementine unfortunately marks him as largely indistinctive.

In a sense, perhaps the addition of new characters isn’t as bad as it first seemed – not many of the characters already in place have much of an impact on the player, and clearly not that greatly upon Clementine considering they are dropping like flies with relative ease. The likelihood of a mysterious female role model for Clementine seemed promising with the addition of Jane to the group, and she does not let us down; her interactions are much more unique than any experienced before in this season as she teaches Clementine in a methodical way how to attack walkers from behind, and where to stab them to ensure they are put down. She’s a great change in the line-up; her hardened exterior provides an almost robotic self-preserving calm, yet it is matched by a humanity that is clearly influenced by the loss of someone important to her. 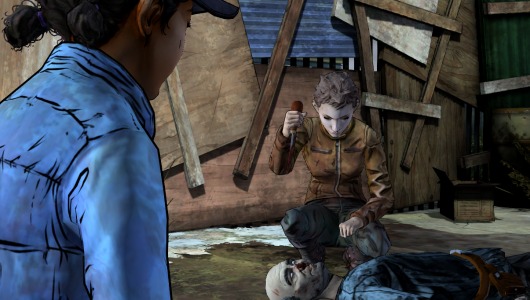 Clementine almost seems a younger Jane; throughout this episode she shows a growing indifference and detachment when putting down zombies. The presence of terror in the opening, where members of the group were divided within a sea of walkers did create a manic urgency, yet less threatening confrontations seem to have little impact on our protagonist. There’s obviously the element of familiarity – as long-term survivors, each character has seen their fair share of blood and guts, particularly of the undead kind. Yet when it’s, say, a familiar face on that moaning, dragging body, a stronger reaction to having to wedge a hand-axe in their brains wouldn’t go amiss. The sense of loss of yet another fellow survivor isn’t quite there, at least not in the same way Season One destroyed us with.

Yet in a way, you could grasp why this might be the case – Clementine is in a very different scenario here, companionship with no similar warmth that she previously had. Death with less impact on the player or protagonist could even be the intent, given that these characters and this group held memories and shared experiences before Clementine came into their path. Clementine and Jane, largely outsiders, would not feel the same grief shared between Rebecca and Luke; this is made clear when Luke takes Rebecca aside for a moment, hinting towards a mutual understanding and connection to their friend that we have not witnessed. This may be the case – yet does not wholly make up for some very patchy character development resulting in deaths that are steadily losing impact. 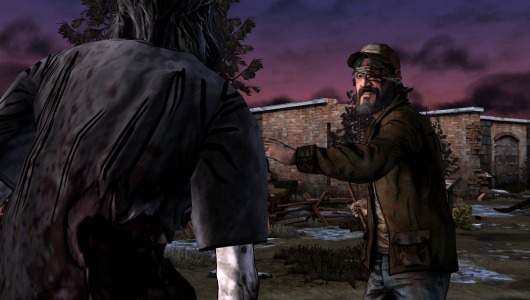 With the characters and story’s direction being somewhat hit-and-miss, it’s reassuring to see effort being made in strong aspects of The Walking Dead‘s arsenal. The return of Kenny’s character is definitely more than just a tribute, with his behaviour very believably reflecting the pain of old wounds reopening in this episode. His interactions with Clementine lead us on much more timid ground compared to others – the rumbling undercurrent of his anger and bitterness is very present, and we have a number of options in dealing with his visibly emotional outbursts. Whilst he may not be a favourite of all thanks to his often controlling decisions and verbal attacks, he continues to offer what feels like more complicated choices, and a challenge we do not want to lose – that of choosing the side we feel is right.

Another strength that continues despite the often stumbling progression through Episode Four is the tone set by an unfailing use of sound. Whilst the chapters and scenes don’t flow very smoothly, the mood within each is brought forth very clearly; when Clementine, Rebecca and Jane make it back to the meeting point early on in the episode, the tension deepens alarmingly through the scene awaiting them, and is done so thanks to the hazardously sinister turn the background music takes. The fittingly stark settings also remain lovely to look at, as while they provide little in the way of variation, they continue to show off the quality of the game’s unique style. 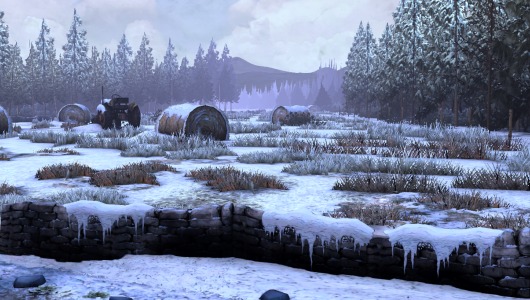 It’s The Walking Dead, so naturally it maintains its success in providing a jaw-dropping ending; yet as a climax to the episode, it does not work so well. Instead it’s a sudden surprise that raises a number of questions out of the blue, and whilst successfully leaves the player in a suspenseful lurch, is more a rush of intensity that ill-fits the mismatched pacing of the rest of the episode. It’s presented in quite an awkwardly hurried manner due to the quick introduction of a fairly generic bunch of antagonists whose roles have very loose explanations.

The lack of direction, both in Clementine’s position and in the plot as a whole in Amid The Ruins, is substantial. This drifting sense does suit the crumbling surroundings; the group are scrambling to find their way, and to maintain comradery as they do so. Yet with only one episode to follow, I’m really not sure what will take place as there seems little hint toward the outcome of any of the developments of this season so far. Here’s hoping deliberate direction is restored on the route towards the kind of dramatic and powerful ending that hit us in Season One.