“War does not determine who is right – only who is left.”

Video games and war have always shared a relationship, whether through glorified violence or anti-war sentiment. Valiant Hearts tells a story set in the middle of a war (World War I in this case) but is far more concerned with the people affected – those who are left.

Valiant Hearts: The Great War tells the story of a few, linked characters. Firstly, there is Emile – a French farmer forcibly enlisted into the nation’s army. Karl is Emile’s son-in-law and German by birth. Because of this, when the war begins, he is recruited by the German military. During Emile’s time in combat, he befriends Freddie and Anna – one is an American soldier with a chip on his shoulder and the other a veterinarian student who volunteers as a war medic. Linking each of the characters together is an unnamed German Shepherd dog, who partners with each of the characters throughout the story. 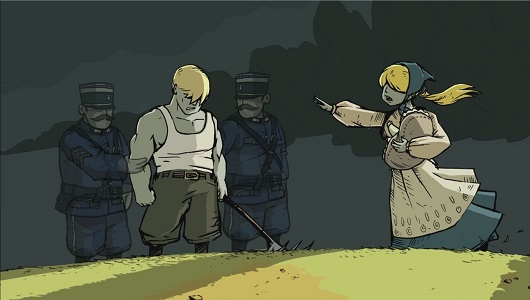 Instead of relying on the usual war game style, Valiant Hearts utilises Ubisoft’s internal UbiArt framework. Initially started as a smaller project, similar to Child of Light, the game does not rely on combat mechanics, instead playing out as an adventure/puzzle game. While this maintains a level of fun and entertainment through the game, it also allows a sincerity to permeate the tone. Refraining from having to kill all of the other soldiers allows them to have brief stories of their own.

Obviously, many of the locations in previous historical war games reoccur here as it too is set in Europe. However, World War I has rarely been depicted in video games. This means that the desperation and brutality of trench warfare, as well as the events that occur throughout, feel new and immediate. 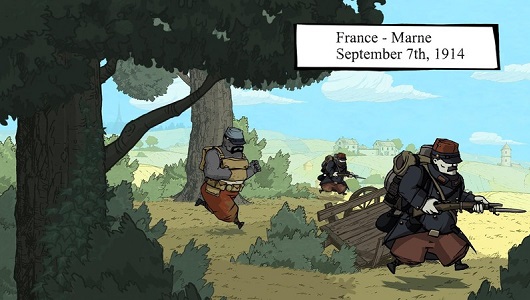 While there are moments where you have to knock out enemies as you stealthily infiltrate or exfiltrate an area, most of the time you spend in the game is finding objects to allow you to progress. The game mostly involves navigating through a situation using each character’s skills. Emile is a digger, allowing you to quickly find cover from bombs or escape the notice of guards. Freddie can cut through barbed wire blockades while Anna provides medical attention to the fallen.

Most of the scenes in Valiant Hearts involve simple puzzles – like finding an item in one location and bringing it to another. This may sound one dimensional, but the changing contexts and environments means it never gets old. Introducing elements like thick poisonous gas and air bombardments will keep you on your toes. 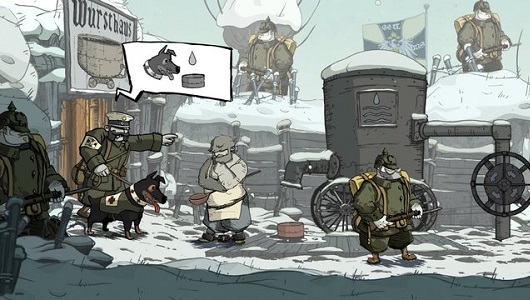 The dog is also used regularly in various puzzles. He can distract guards, fetch items out of reach of the playable character and trigger switches on command. Just adding the ability to pet him and hear his contented barks is enough to give him a personality of his own.

As you progress through areas or collect items dotted throughout the game, you will receive regular prompts to open diaries or historical articles explaining further the details of the war. This often adds to the general atmosphere is desolation as you read the death tolls in the battle you are currently in – adding a further sense of sadness to the countless NPCs (non-player characters) you find strewn across the battlefield. 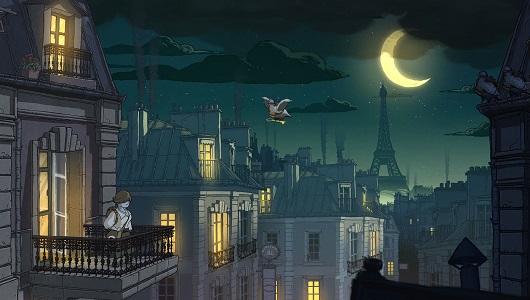 This grounded tone is then put at odds with some elements of the narrative. Freddie’s aforementioned chip involves tragedy in his past. His current enemy is a baron in the German army. Honestly, this entire segment could have been taken out as the moustache-twirling, Zeppelin-flying baron seems so out of place in the game.

However, moments of levity are not altogether out of place. In a few instances, you take part in car chases which play out to classical music. Swerving in time to the music helps you nail the on-screen prompts. The type of gameplay is re-introduced with Anna, the medic. When attempting to help the wounded, a mini rhythm game is started, where you match the prompts on-screen – this time though, there is no accompanying music.

Valiant Hearts: The Great War is well-crafted game which tells the story of World War I from both sides of the conflict, without losing the impact it should have. Many games would prioritise fun over emotion, but Ubisoft Montpellier manage to keep to history and still tell a compelling story.