Chris Miller and Phil Lord are quickly becoming some of the best talents in Hollywood right now. Not only have they given the world one of my favourite movies of the year in The LEGO Movie, they also managed to reboot an old T.V. show franchise without making it terrible. Like horror, second bites at the cherry in comedies often lead to lacklustre follow-ups. I am therefore happy to say that 22 Jump Street delivers yet another reason to praise the Miller-Lord pairing.

After a botched drug bust, Schmidt (Hill) and Jenko (Tatum) return to Jump Street and the domineering stare of Captain Dickson (Ice Cube). Sent to a local college after a student is found dead, they must investigate a new drug craze sweeping the campus, before it makes its way into more institutions… and if this is all beginning to sound familiar, you are not alone. However, like every other genre Lord and Miller tackle, convention is acknowledged and then made funnier. 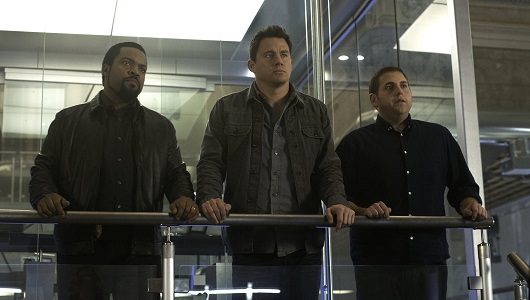 In fact, the first twenty or so minutes is nothing but references to the fact that their previous operation (the first movie) was never meant to work but luck saw them through it. Now, the commissioner (us) wants more of the same from our two heroes so is sending them back to another educational institute to squash a drug ring – this time with a larger budget in the hopes that the same thing can work out evener better if you give it more money. All very meta, you might say.

While the gags regarding comedy sequels are used throughout the movie, it does play things smart too. Taking the strongest element of the original and doubling-down on it is rarely a bad thing so in 22 Jump Street, we get more of the dynamic duo that is Jonah Hill and Channing Tatum. Their interplay has lost none of its charm and Tatum proves once again just how good a comedic actor he is. You might expect it from someone like Hill but Tatum’s timing is flawless. 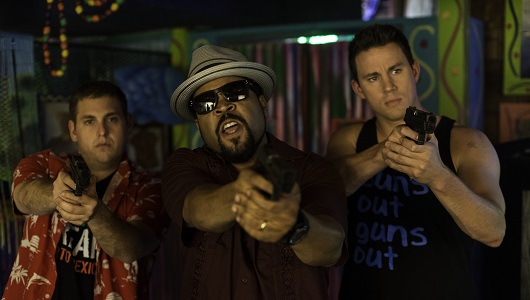 Strongly backed up by Ice Cube, who is given a larger, meaner role this time out, the supporting cast are all superbly funny. The Lucas Brothers, Nick Offerman and the rest of the cast have only a few moments, as the focus is on Hill and Tatum, but with what little time they have, they make a huge impression. However, I must say that the scene involving Rob Riggle and Dave Franco is one of the weakest in the movie. 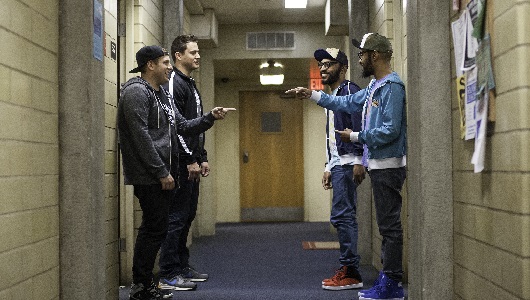 Another criticism I have is the lack of any development in Schmidt and Jenko. Once again, Schmidt is an insecure neurotic who is far too clingy. Once again, Jenko is a moron who mispronounces ‘carte blanche’ as Cate Blanchett. The characters may be appealing but just because 22 Jump Street is a comedy doesn’t mean it gets a free pass. The joke might be that they are doing the same thing again, but it would have been a good opportunity to introduce some subversion to the formula here.

By the time the credits roll (and by the way, the end credits sequence is hilarious), you will leave the cinema in pain. Your eyes will be watering, your cheek bones will throb and your sides will stitch. There are a few lulls in the movie from time to time, but the recurring gags keep the show rolling such as the walk of shame, the homo-erotic bromance between Jenko and his football teammates and the relationship analogies between himself and Schmidt. 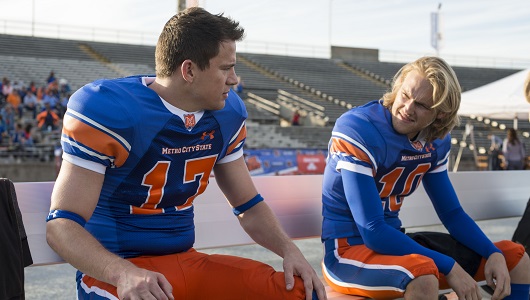 22 Jump Street is one of the funniest movies of the year. Chris Miller and Phil Lord once again defy expectations and logic by making a sequel to a comedy and have it be better than the first entry. Jonah Hill and Channing Tatum equally defy all common sense by continuing to be a partnership that just works.