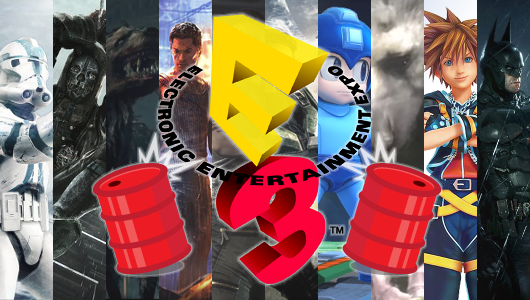 The biggest event in a gamer’s year is now less than a week away. With E3 so rapidly approaching, the excitement is building and rumours are circulating. With this in mind, here are some wishes and predictions from us here at Big Red Barrel.

I’d like to see more of Star Wars Battlefront. I’d like to think that it’s a given after that teaser in 2013, and ideally I’d want to see at least some gameplay. I feel like EA would be wise to invest more time into this game than their other action titles, especially Battlefield Hardline after the still bumpy road that is Battlefield 4.

Nothing would make me happier than seeing the long-rumoured sequel to Dishonored showing up. Dishonored was one of my absolute favourite games ever, let alone of the last generation, and a showing at this year’s E3 would send me to the moon on a trail of delight and rainbows.

Kingdom Hearts is hands down one of my all time favourite game series, and the surprise announcement at last years E3 was the show-stealer for me. Seeing worlds based on the best of Disney being realised using current tech has me beyond excited, and now is certainly the time to include worlds based on Pixar’s back catalogue, and the possibility of a world based on Frozen has me giddy with excitement – Marshmallow would be an amazing boss fight! I’d also like to see Lightning make an appearance, her world jumping actually gives her a valid excuse to be there.

Like Rik, Kingdom Hearts is one of my favorite series of all time. I’ve followed Sora, Donald, Goofy across years of story and several different platforms and now we’re close to the end. It’s been too long since KH 2 and all I need now is a release date. I’m not hopeful of a 2014, or even a 2015 release date but a new trailer with some gameplay and/or story would go down very very well. With the story-lines of Sora and the original cast finally coming together with Ventus, Aqua and Terra the stage is set for an amazing finale. The possibility of new locations such as Frozen and Wreck-it-Ralph as well as the small chance of Marvel and Star Wars worlds making an appearance has me super hyped too.

NOTE: It now looks like Kingdom Hearts 3 won’t be at E3 this year. Let’s hope Square Enix are pulling our collective legs…

It has been 7 years since we got a new Syphon Filter to play. We never got a Syphon Filter for the PlayStation 3 at all; just a few PSP games. The series used to be a PlayStation stalwart. I’d love to see Syphon Filter come back as a big PlayStation 4 exclusive – hopefully developed by one of PlayStation’s big name developers. I feel like the series has had enough time off that people would welcome its return.

My love of Naughty Dog is well known at this stage but even my resolve has been rocked by all of the news coming from the studio recently. I want to see a confident, triumphant return to the E3 stage – show us gameplay, multiplayer and hint at the inclusion of a co-op mode, then see us out with a cinematic that would leave J.J. Abrams weak at the knees. Nate For President!

I want to see more on From Software’s Project Beast. It hasn’t even been officially announced yet, but it quite clearly exists and as a fan of the Souls series, it excites me that it doesn’t look like a typical Souls game, if it is a Souls game at all.

We’ve already been treated to a decent amount of content but with a lot of hopes for a great Alien game riding on this, further game-play would be great to see. Any further look at the survival horror atmosphere aboard Sevastopol station would be a treat.

The original Sleeping Dogs seemed to come out of nowhere. Right up until release it had gone under the radar, dismissed as just another mid-tier game stuck in development hell. I LOVED Sleeping Dogs. The story was fantastic, the combat was brutal and the setting was wonderful. I am dying to see more. United Front Games confirmed back in October that Triad Wars was in development and that we’d get to see it in 2014. We have not seen anything yet so E3 seems like a good place for Square Enix to show it off to the public for the first time.

Super Smash Bros. is a game series I hold very dear to my heart. Nintendo have announced quite a lot regarding the upcoming games for Wii U/3DS but there’s still a lot to speculate about. Where are fan favourite characters Captain Falcon and Ness? What cross platform functionality will there be between the two versions of the game? What do the “custom move sets” that were hinted towards in April’s Nintendo Direct actually entail? Will there be more third party characters added to the roster? But most importantly, when are the games actually releasing?!

It’s hard to say if I’d prefer to have the rumored Halo: Master Chief Collection with all four numbered games remastered on Xbox One or just Halo 2: Anniversary. If pushed I think I’d choose to have Halo 2 because with a collection I wouldn’t expect it to have any multiplayer and so it would likely be just the campaigns/firefight. However if Halo 2 was remade by itself we’d have a much greater chance of multiplayer being remade too and that just edges it for me as I’d love nothing more than some Halo multiplayer on Xbox One. Of course, the ideal situation is the Master Chief Collection with Halo 3 multiplayer but that isn’t likely to happen. I can dream though.

I suppose this should say ‘Game I’d Like To See Re-Announced’. I have been pining for this game ever since the bird-lion-puppy first showed his beak. ICO and Shadow of the Colossus are two of the greatest games from the PlayStation 2 era and if Fumito Ueda can channel even half of the creativity and heart I know he can into TLG, it will be worth the long wait. If Shuhei Yoshida came on stage with the screen behind him flashing the title ‘The Last Guardian‘ and a release date, and he then proceeded to happy-dance for the next two hours, I would think Microsoft had a tough job ahead of them to top that.

Never really taking off in the UK as well as it’s Japan market, Bust a Groove is one of those titles that is played by few and loved by even less. In this age of re-releases and HD remakes flooding the market in lieu of backwards compatibility, I want to be able to play one of my all time favorite titles. I originally latched on to this quirky dance off title back in 1998, Over the years I’ve been able to collect a group friends that also look back on Bust a Groove with fondness and a want for reconnecting with this game in the current generation. Unfortunately with newer fangled Smart TVs, Bust a Groove is plagued by sync issues with it’s sound and is pretty unplayable (Unless you’re that desperate and try to adapt). A HD remake of Bust a Groove would be a great way to bring this title back to the older fans, maybe grab some newer ones and maybe bring its sequels (Bust a Groove 2 & Dance Summit 2001) to unreleased territories.

The Legend Of Zelda: Wii U

We know it’s in development, but we don’t know anything about it, and I’d really like that to change. The Legend of Zelda series has been dear to me ever since I first played Ocarina of Time on Boxing Day of 1998, and I’ve never looked back. Each installment brings something new to the table (for better or for worse), and it’ll we be amazing to see a brand new Hyrule in glorious HD. I’m just hoping we don’t get stuck with Hyrule Warriors.

We know it’s being worked on and we know it’s in a playable state. The real question is; Will BioWare officially reveal their next title in the Mass Effect series at E3? If I were to guess, BioWare could very well put out a teaser trailer in much the same way as they did with Mass Effect 3 – after all, they don’t want to overshadow Dragon Age: Inquisition. Maybe we’ll get our first glimpse at a new protagonist? Will we be able to play as any race we’d like? Will the game be a prequel or a sequel? Right now, all we can do is speculate. But maybe in a week’s time we’ll have some solid answers.

What I’d like to see announced – Mass Effect. I’m itching to get back into that universe, the few tidbits we’ve had are nice, but now would be the time for a trailer of some sorts.

Rocksteady, last month, whetted the appetite of many DC fanboys with their Batman: Arkham Knight Gameplay Trailer. Any obsessed Batfan like myself is going to want more. Anybody who’s picked up either Arkham City or Origins is clearly going to know what to expect – more fighting, grappling and gliding in an open world, but this grand finale to the Rocksteady trilogy also brings an integral part of the Batman universe… the Batmobile. With the Batmobile getting a close up in the latest trailer along with some brief shots of the vehicle in action, I’d really like to see more about just how may dream car will be used (hopefully not driving through markers against the clock). If we could also get a bonus 1966 Adam West costume from PlayStation owners like last year’s E3 brought us, I’ll be a very happy boy indeed.

And that’s it for us. What are some of your hopes and dreams for E3? Leave a comment below and tell us what you’d like to see next Monday.