Godzilla comes stomping back onto our screens after a sixteen-year absence and despite the critical slamming the previous movie received, I went into the cinema last night, full of anticipation. Why, you ask? Firstly, Gareth Edwards was responsible for one of the best large monster movies in recent years, in Monsters. Secondly, he assembled a talented cast with Bryan Cranston, Ken Watanabe, Elizabeth Olsen and Juliette Binoche all involved. Finally, all of the pre-release media hinted at a more serious tone, one reminiscent of the 1954 original.

I am happy to report that I worked home afterwards happy with what I saw, though not without reservations.

Joe Brody (Cranston) was an engineer at a nuclear power plant in Japan. After strange seismic activity near the plant caused disaster and personal tragedy, he resolves to find out exactly what happened and why it has been covered up. This puts strain on his already-fragile relationship with his son, Ford (Aaron Taylor-Johnson), who has his own young family to worry about now. When they eventually do meet what caused the incident, more disaster and tragedy soon follows. It is then up to Ford to make his way back to his wife and child, while the king of monsters makes his 21st century reappearance. 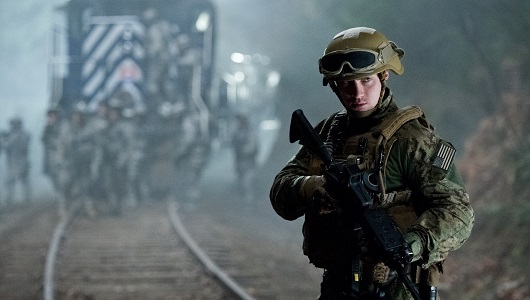 Opening the movie with footage from the nuclear tests in the 1950’s, Edwards begins the narrative with the idea that those tests were actually attempts by our governments to kill our titular anti-hero. This immediately sets up an interesting world where people are aware of the monster before he arrives to lay down some smack. Unfortunately, this prior knowledge does not mean that we are any the wiser on how to stop him, or even if we should. Edwards keeps the Godzilla mystique going, giving us brief glimpses of the main event, while also filling in his backstory via exposition from Dr. Serizawa (Watanabe). 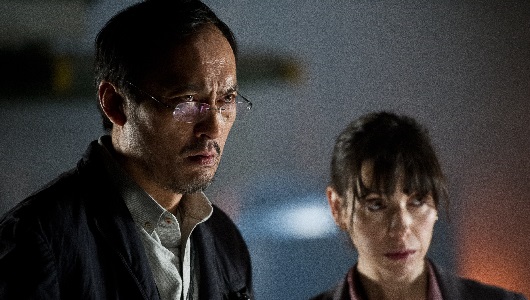 Unfortunately, many of the characters throughout the film are reduced to this – exposition-doling machines, particularly David Strathairn’s Admiral Stenz. Though it starts strong, with some fantastic performances from Cranston and Binoche, the movie shifts focus to Ford Brody, who seems to be living in a personality vacuum. I know Taylor-Johnson can act and act well, but the script simply gives him nothing to work with. If I’m honest, the far more egregious mistake is giving one of the best young actresses around, Olsen, absolutely nothing to do except look, well, exactly like she does in the picture below. 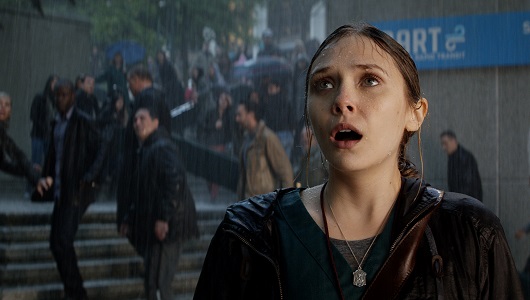 The narrative is also not exactly top-class. There are plot-holes so big you could fit a kaiju through it. There seems to be an inherent disconnect between the character interactions Edwards tries to build and the sheer silliness of a gargantuan monster wreaking havoc. Regardless, it serves the purpose of moving us towards more monster mayhem, and thankfully, I can be far more positive about that. 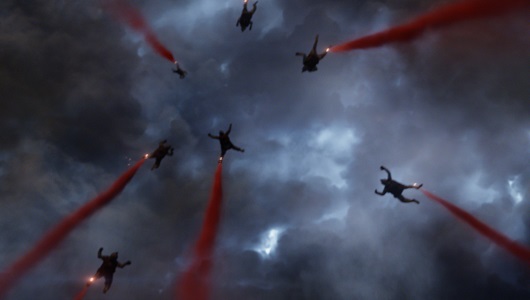 Godzilla is an absolutely massive creature and you believe it. As a force of nature, he is practically ignorant of us mere ants at his feet. He is here to do a job and we are not his concern. As for what this task is, I will let you find out. What I will say is Edwards cleverly limits our time with him. This restraint means that by the end, we get a colossal showdown that simply does not disappoint.

As a filmmaker, Edwards also has the scope (and money) to let loose a bit more. Very quickly, you can see the influence people like Spielberg have had on him. Numerous shots and audio cues seem to be taken wholesale from the master’s work and Edwards implements them to perfection.

Despite the dodgy plot and poor characterisation, Godzilla gets one key thing right – the monster himself. When I first heard him roar, I felt goose bumps. He truly feels like a force of nature, which goes a long way to make this movie worth watching. My advise? Go for the spectacle, try to ignore the plotholes.