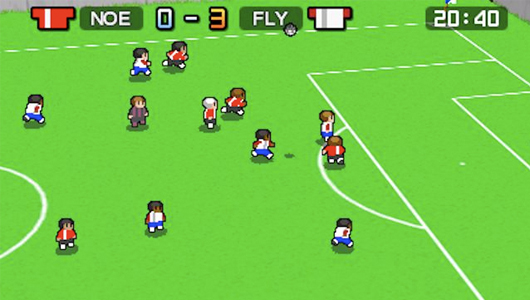 How much can you strip something back until all that remains are the most essential raw parts that define what that something is? Nintendo Pocket Football Club seems to be a case study in reduction. Anything considered even vaguely extraneous has been culled, leaving behind one team’s interpretation of football management in its purest form.

It’s initially a little disorienting, especially as you take your first baby steps into the local leagues. There are no wages to negotiate, no angry players to calm down and little in the way of stats to wrap your head around. Instead, the focus is on training players and putting them in the right places on the field. And then you let them get on with it.

Indeed, despite your best efforts, you’ll probably lose the first handful of matches in a pretty bad way. Despite playing around with the formation and the spread of players and having an internal debate with yourself over offensive vs. defensive play styles, it’s likely your team will be royally thrashed in the opening games of the season. It’s near-impossible to fix serious tactical errors during a match too: save for half-time breaks and substitutions, the game is entirely out of your hands when the starting whistle blows, and you have to watch every agonising loss unfold.

It’s only through learning lessons the hard way that your team improves. Whether playing league games, friendlies or half-length practice matches, your on-screen avatar – your Mii, decked out in a business suit – will crop up from time to time, remarking on mistakes and issuing an appropriate Training Card to use on a player in order to stop the issues from coming up again. If your players can’t mark for toffee, you’ll receive a Marking card; if your defenders are lacking in the macho stakes, you – digital, suited you – might recommend a course of Judo to beef them up.

These Training Cards are the key to improving players. They affect seven different stats, covering kicking and stamina through to toughness and their morale. Combining cards in specific ways unlocks further stat boosts and over time dictate how players work: Explorers, for instance prefer to play the field with their unbeatable stamina, while toughened up Stoppers tend to thrive as fortified defenders. It’s hardly headache-inducing stuff and yet the results begin to show as the goals trickle in, incentivising you to experiment some more with the rest of your team. 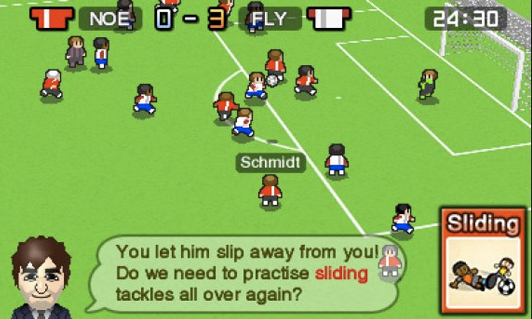 The matches themselves are a simplistic delight. Despite the blocky styling there is a real thrill to each cross and you can’t help but grin as an opposing player cradles his head in hands as the ref dishes out a yellow card. Players and officials alike are believably fallible too: players will mess up crosses and officials will sometimes miss offside passes (as the below video illustrates). There’s even the occasional dramatic low-angle shot from behind the players during particularly close free kicks.

For the most part, each match is chucklesome and it begins to make sense watching each one unfold. There’s a tangible sense of progress being made from match to match, and a replay theatre allows you to see exactly what has changed over time. I’d go as far as saying that, in terms of replicating the excitement and ferocity of a close-knit football game, other management games don’t come close. Dinky goalkeepers leap with aplomb and your supporters yell messages of support as you bring on new players, and you’ll want to cheer with them too.

As you get promoted the prices in the transfer market inevitably go up but even after a few seasons I had most of my original team intact. Pocket Football Club encourages you to work with what you have rather than expend your entire budget on two or three superstars.

As such it’s likely you’ll become attached to your roguish band of misfits having clawed your way to the top from the pits of the local leagues. You’ll know who to play where, who to set for penalties and free kicks and how to spread players over the field, at least for a while. This can be where NPFC‘s limited scope comes back to nip it on the bum. Progress from league to league essentially involves the game loop starting over: your once-invincible team gets pipped by the dregs of the new league table, as you were pipped by the dregs of the old lot too.

Nintendo have attached their name to the front of the title with good reason: it’s intentionally simple, as it should be on a come-one-come-all platform such as the 3DS. In places it even resembles Kairosoft’s Pocket League Story series on mobile, yet the two are very different creatures. Kairosoft’s titles have always been about levelling up in everything: improving the condition of the club gym and holding silly events to please the fans. This comes across as a more streamlined and serious effort in comparison.

The pleasures of Pocket Football Club aren’t really in boosting stats so much as the spectacular goals and teamwork that unfold in the matches that follow. It can be frustrating working up to such successes, as playing in friendlies and practice matches is essential. Those who stick at it are justly rewarded with spectacular shots courtesy of well-nurtured footballers with adorably stumpy legs.

Sensibly silly stripped back football management
The best, most natural match engine in a management sim – really
Some will find the limited scope wanting

There may be less to the entirely of the game than a single FIFA setup screen but this suits the 3DS perfectly. It’s cute and warm and nice rather than cold and calculating: as a manager you’re too busy teaching your defenders to jump higher (really, there’s a Jumping card) to pore over stats. The dedicated and the hardcore may find its limited scope too narrow to really allow for innovation. In that case, take a point off of the score.

The rest of us, content to lead our stubby-legged legions to championship glory, will find Nintendo Pocket Football Club‘s deeply refined, heavily stripped-back approach to football management nothing short of ludicrously silly fun.