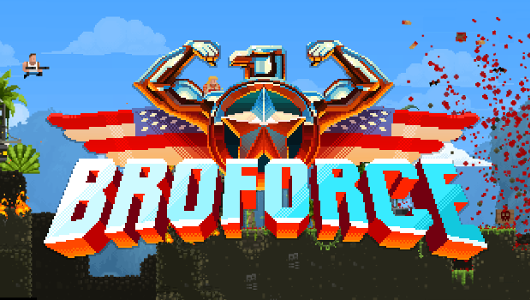 Do you long for the nostalgic vale of an 80s ‘Merica when action movies ruled the earth and have the cinematic magic of gun-toting, muscle bound guys with poor vocabulary captured within a video game? Unfortunately, in this modern age of gaming, we’ve not had much luck insofar as decent action movie fodder is concerned, thanks to the lacklustre attempts of films like The Expendables 2. But perhaps the problem is with integrating these muscle-bound ideas into a modern game style. Well, let’s find out – cue Free Lives and their absolutely balls to the wall title Broforce!

Broforce brings back the classic arcade shooter, staffing the ranks of the good guys with just about every action movie hero from the 80s to the present day. There’s an amazing line-up of (admittedly renamed for legal reasons) characters like B.A. Broacus and Rambro, each with their own unique abilities to keep the whole experience fresh as you unlock more Bros to your roster.

Gameplay consists of the same running and gunning goodness to be found in classics like Contra, combined with a modern platforming style similar to the mechanics used in Spelunky. Your aim in each level is to run around shooting all the bad guys whilst scaling obstacles by either using a knife to stick to walls and the classing jump to climb – or, if jumping over stuff sounds like too much effort, you can take the more direct, brute force approach of shooting/punching/slicing/blowing up the offending terrain to clear your path.

Using the might is right method is a great deal of fun and can help you reach areas with ease; but, as the majority of the environment is fully destructible, you may find yourself accidentally destroying the platform that you’ve so desperately been trying to reach. Once you’ve gotten the hang of progressing through each level, your mission is to reach checkpoints by hoisting the Star Spangled Banner (accompanied by a Stallone-style “YEAH”) and rescue as many hostages trapped in cages as possible. Each hostage rescued results in your character switching to somebody new – freeing a set number of these prisoners unlocks more Bros to wreak havoc with.

Level completion is achieved when you reach the last checkpoint and kill Big Evil, who appears to be Satan in a suit (although the devs missed a trick by not calling him Diabro – Ed.). Dispatching Big Evil triggers a “Get to the Choppa”style escape, leaving behind a barrage of explosions and awesome music. An exception to the escape style endings come in the form of Boss Battles which, as expected, can be very hard and reflect on those arcade shooter roots. 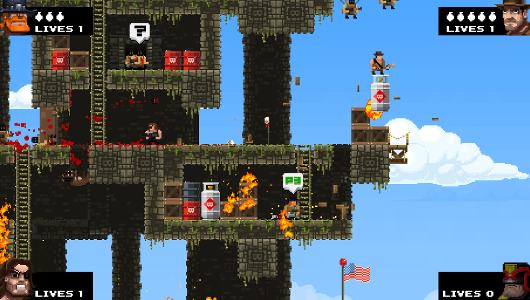 Though Broforce‘s style allows for simple enjoyable solo pick up and play action, there is a large emphasis on playing cooperatively. This piles on the insanity like nothing else that you will have experienced in single player, largely thanks to the joy of listening to your friends yell in glee as they unlock a new favourite action hero. Heck, after playing Broforce for only a few short minutes, I felt compelled to gift as many copies to my friends as possible to really get into the experience.

Co-op allows for two to four players to jump into the mayhem together either locally or online, though it’s currently better to take the local option. At present the online is rather unstable and I’ve not actually been able to connect more than two people at a time without running into problems, but this is to be expected from a game in early release and Free Lives are working to improve this.

Despite Broforce being in beta, there are still a number of different and hugely entertaining modes for you to play through. The World Map mode plays much like the regular campaign, except each level is navigated by using a helicopter to fly through a Super Mario World-esque map. Race mode puts up against your friends and throws you into different levels at random and tasks you with either surviving the longest, reaching the end of the level first or just outrunning your opponent off of the screen; the Race mode is one of the more hectic modes and has the potential to destroy friendships (like every good competitive mode should).

Explosion Run is another competitive type but with a difference – if you all die then you’ll all lose. This time you start off each level in a cage and have to escape before trying to outrun a moving screen. Levels are rather short but are filled with mines, enemies strapped with TNT, mini-gun welding grunts and other harder enemies like missile turrets. It’s one of the hardest game modes and will most probably infuriate you as you play, but it’s incredibly satisfying to clear a Explosion Run level.

Lastly, there’s Deathmatch – which pits you against your friends (duh). Players are given a choice of Bros to pick and stick with throughout each match, then given a stage in which you’re tasked with killing each other over and over again until all bar one of you has run out of lives. There’s also a level editor for you to go have a play around with and build your own tormenting stages to make your friends compete in.

Broforce is currently available on Steam as an Early Access title, which means the game is fun but not yet finished. There are additions constantly being made to the title’s ever-expanding roster of Bros for you to pick from, as well as a host of other updates to the game. If, like me, you’re  an experienced enough gamer to remember wandering round arcades in the 80s and 90s, then this is a must have.