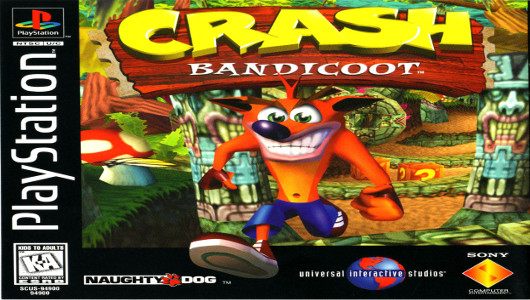 Blast from the Past: Crash Bandicoot

Whoa, do you guys remember when games had lives?

I just spent all of my free time over the past few days playing the original Crash Bandicoot on PlayStation Vita. Thanks to a bizarre two-day download exploit, I was able to access this 1996 platforming classic on my handheld of choice. I barely slept and my eyes feel like they are bleeding. I am just now recovering from the perpetual chest tightness caused by constant death. I came quite close to throwing my Vita during the insane final island, but my God was it worth it.

Naughty Dog’s first major critical success, Crash Bandicoot arrived during the heyday of 3D platforming. Originally nicknamed “Sonic’s Ass Game” (due to it’s rear-facing perspective) for pitching purposes, Crash was released mere months after the Japanese release of Super Mario 64. Up until Mario and Crash transitioned us into the 3D realm, platformers almost universally involved side-to-side gameplay. Placing the camera behind the player character was essentially unheard of, so a silly moniker like “Sonic’s Ass Game” was needed for the developers to get their point across. Creator Andy Gavin explained the nickname better on his personal website when he said,  “Well, we thought, you’d spend a lot of time looking at ‘Sonic’s Ass.'” Is that important? Probably not, but I got to type “Sonic’s Ass” four times, so everyone is a winner in the end. 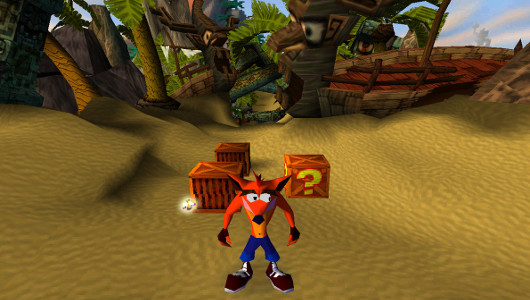 The nostalgia I received from this opening sequence was palpable.

The game takes place on three fictional Tasmanian islands, each more maddening than the last. While Wikipedia may suggest that the game contains a long-winded, twist-filled narrative, I can assure you that that is total nonsense.  Crash Bandicoot is quite simple: Dr. Neo Cortex is an evil dude using evil potions to mutate animals into evil beasts; go stop him. Crash (sort of) has to save his girlfriend Tawna (who clearly does not mind being the taller half of this bandicoot couple), but she appears at every save point, so her distress is highly questionable. You are probably not coming to Crash Bandicoot for the story, especially in 2014. Perhaps in 1996 the “save the lady from the bad guy” trope was fresh, but not today. What makes Crash Bandicoot exceptional nearly eighteen years after its release is the punishing gameplay.

Holy delectable wumpa fruits, how did I play this when I was five? I mean no disrespect when I say that Crash Bandicoot is a nightmare to get through. If you are not a fan of trial-and-error platforming loaded with single hit deaths and constant falling, look elsewhere for your classic game fix. Using the power of perspective, Crash requires you to get from Point A to Point B by avoiding enemies and obstacles collecting those delicious wumpas (the game’s mango-esque coin equivalent) along the way. Cool, so I just added wumpas to the description of every platformer ever, what makes this one so special? Well author asking himself questions, the level design is phenomenal in a multitiude of ways. 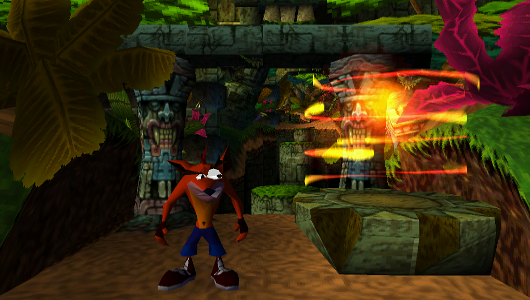 How can that eyeball not make you smile?

The simple opening beach levels quickly transition into treacherous native fortress climbs. You will run through temples before trekking up a castle’s walls. Some levels use light, or a lack there of, to trip you up, while others will require you to jump through fire. As you move along, the timing required to pass each section becomes more and more precise. By the end of the game, if you are not passing through each section perfectly, you are doomed. You do have the potential to collect Aku Aku masks (Hoonamaga!)  that allow you to take extra damage, with three granting invincibility, but Crash Bandicoot is still brutally tough.

As I mentioned before, you have lives to worry about! Lose all of your lives and you have to go back to the most recent checkpoint, which could mean replaying five or six previously conquered levels. Unless you are a phenom, your lives will quickly dwindle, requiring you to either find more or collect 100 scrumptious wumpas. I am by no means the best gamer in the world, but I pride myself on being decent at nearly everything I play. However, twenty hours of Crash Bandicoot failure quickly brought me back down to Earth. 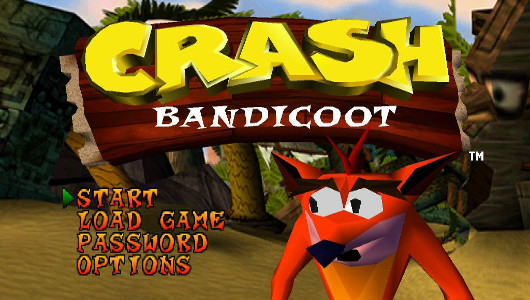 A wide number of polygonal PlayStation titles look like complete garbage, which could not be more of a shame. If you play Metal Gear Solid today, you will find yourself distracted by the glaring lack of eyeball-rendering. Fear not friends, Crash Bandicoot is not one of these hideous classics lost to time. Although not as pretty as classic sprite-based games of yesteryear, Crash is still a joy to behold. Jagged edges are obviously present, but when playing oldies, we cannot mistake the forest for the trees. As a whole, the island environment is fun to immerse yourself in. Perhaps that crab looks like an oval with triangle legs, but you still know it is a crab. The major asterisk here is that I played Crash Bandicoot on the Vita meaning everything was compressed onto a small screen. Just as Fez seems to look best in its compacted form, Crash Bandicoot‘s visual shortcomings are minimized by a lack of stretching.

So I have gushed over a classic game, who cares? We all know that Crash Bandicoot is great; I would not have become a gamer if I had not been exposed to Crash at such a young age. However, its save system needs to be locked away and set ablaze.

Collecting three of these icons grants you the chance to possibly save.

Throughout your journey, you destroy a finite number of wooden crates. While some crates give you lives or (you guessed it) mouthwatering wumpas, others produce character icons. Collect three of these, and you gain access to a “Bonus Course,” which generally involves bouncing across breakable crates hovering in the sky. Getting across these short, but always challenging, levels grants you access to a save point. Save points can also be accessed by completing a level without dying or destroying every crate in a given stage. Those are the only ways to save. Maybe this was maddening because I am so used to the wonderful auto-save system we enjoy here in the future, but it still made my blood boil. A lack of a dedicated save system not only prevented me from attempting to play any other Vita game without accessing a bonus level, but it added roughly five hours of playtime. Knowing that this is merely a product of age and not of poor design, I slowly grew accustomed to this mechanic. Be prepared for some rage if you are going to jump down the Crash Bandicoot rabbit hole.

I am overjoyed that an apparent store coding error allowed me to gain access to this gem, as the memories quickly came flooding back. We all have those formative games that stick out in our minds, and this happens to be one of mine. My advice to everyone is to revisit your old favorites, as you will appreciate today’s games even more. Seventeen years was far too long to wait between playthroughs, as my gaming life needed a wumpa or two.