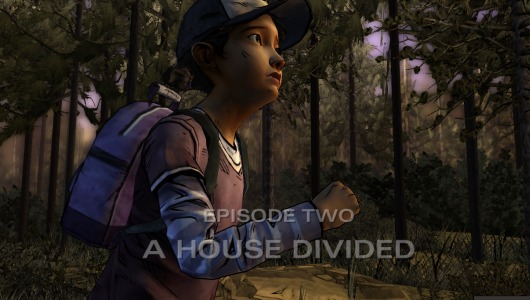 Two months is a pretty long wait –  yet Telltale Games make the anticipation more than worth it. Episode 2 – A House Divided surpasses the first installment of this season, with its potent, ever-present tension and hints towards weighty unanswered questions among Clementine’s new company.

Episode 1 – All That Remains left us with Clementine in fairly dire straits, out hunting with two members of a her new group. With the choices enough to knock you back from the start, Clementine has to side with one or the other for safety – I chose to go with Nick. Thanks to a very handy ‘My Choices’ section of the menu, I can see that I’m in the slight minority; 46% chose the same. I know Pete, Nick’s uncle, was much more welcoming to Clementine, but I couldn’t ignore the practicalities of siding with a more able-bodied, younger man – something I feel a mature, self-preserving Clem would be able to see.

The choice of shots in this game always grab me, those that reinforce that interactive film feel. We’re treated to some great point-of-view shots when Clementine and Nick are hiding from the walkers in a shed-come- brewery. The animation maintains its smoothness, with Clem’s body language a great indicator to the mood. The extremity of her situation is made relatable yet again; the way she creeps around hunched over makes it clear she’s attempting to tread quietly, yet cannot hide her nerves. Nick, on the other hand, seems less anxious about drawing attention, given he is throwing jars of badly-brewed whisky against the wall. 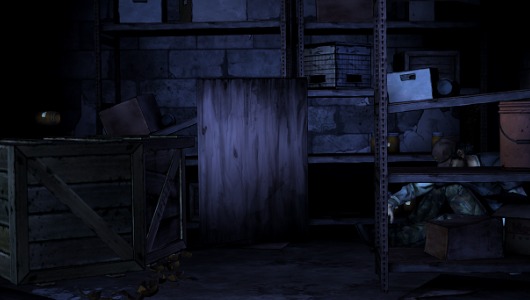 A House Divided is a stepping stone in fleshing out some of the characters of the many that were introduced in Episode 1. Unfortunately it was hard to distinguish at first who was who – the characters refer to each other by names that I initially had trouble attaching to faces. Nick continues to be hostile, particularly after the pair leave Pete behind. It’s hard to gauge the morality of individuals, as there is no measure of what is good or bad in such a reality tipping situation. Yet, it’s hard not to feel hopeful for characters that feel regret over past indiscretions, which was my first reaction to Nick’s confessions in this scene; and through the dialogue options, I could make that feeling clear.

Episode 2 has a bit more downtime than its predecessor, understandable given the need for relationship building between Clementine and her new acquaintances. Clementine’s interactions with Sarah, a girl close to Clementine’s age yet lacking her worldly experiences, suggest the kindling of a friendship that may be integral to Clementine’s development as a character. After the events of All That Remains, there seems a reluctance in her character to engage with another potential friend, and their difference in behaviour is made very clear. However, it is interesting to see opposites in two young girls – the sheltered and the not-so-sheltered – yet the spark of some place in which they can interact as children do. It’s also pleasing (and sad!) to see Clementine passing on the guidance she received from Lee to others, proving his reach to have extended beyond taking care of just Clementine. 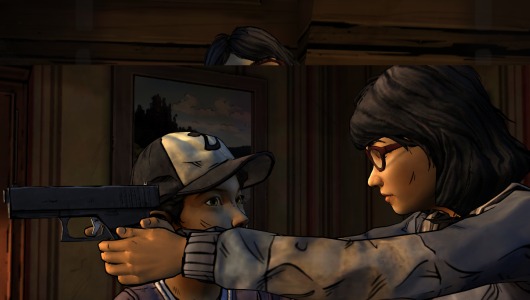 The story pacing is expertly done, and the real achievement is the constant tension that is maintained even in the more gradual moments. The primary tension is caused by Clementine’s position in the group; for people that locked her in a shed when she arrived, they grow oddly trusting and reliant upon her as someone to confide in. By now, we’re years into a world populated by walkers, and the uneasy but mutual trust that the group in Season 1 held lacks a presence here. The tension is rife due to a stack of unanswered questions, many connected to the lack of background or real knowledge Clementine has of those around her.

The role of Season 2‘s main antagonist is introduced in this episode. A man named Carver, fitted with a villainously gravelly voice and an intimidating persona, first meets Clem after arriving unannounced to their cabin. He seems a sinister question mark as we are left in the dark along with Clementine as to his history with the rest of the group, although some of the situation isn’t difficult to assume. Rebecca, the only adult female, is pregnant and seems personally distressed by the news of Carver’s sudden reappearance. Yet there still remains more unease than that caused by this open secret, as Carver’s shady character is met with equal shadiness of Clementine’s companions. They choose to keep the full story disclosed; we are left with nudging questions and hints that whatever happened between them and Carver in the past was dark for both sides.  A threatening and cold antagonist is introduced successfully; yet his determination in finding his unborn child reminds us of this murky greyness some characters can be in. Particularly with this cast, those that appear most upstanding don’t seem entirely trustworthy. 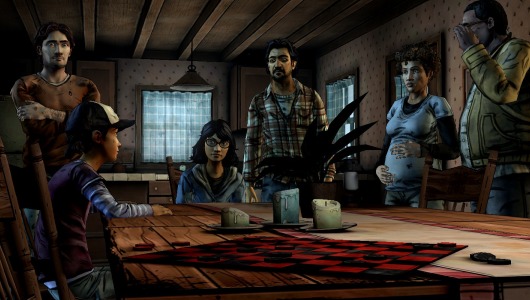 The combat has been diversified in Season 2, with the second episode much improving on this. There is added difficulty that is refreshing in a game that is so story focused. During a rather grappling scene, Clementine has to climb to safety after being forced over the side of a bridge; interestingly, her self-defense is aided by not just one out of reach weapon, but a choice of two. I went for the long pipe over the bat, and it seems I chose rightly; its length let me attack an incoming walker in one of three different places, adding combat choices that make it much more involving than merely pressing arrow keys. Whilst The Walking Dead isn’t a game made for combat, it’s fantastic to see vast improvements and effort being made to engage the player further and have the combat better match the intensity of the game’s story.

It is a credit to the absorbing story that it was unexpected (and fantastic!) to see a central character from Season 1 return in the best possible way. An old friend immediately shouted safety amongst a group of people that remain largely unknown to Clementine. Yet despite the warmth in the comfort of an old companion, this episode leaves us in an even more dire situation than the first. Carver is a chilling character, his behavior dedicated to exacting revenge on his old crew. It will be interesting to see how he interacts with those he has no person vendetta against – Clementine being one.

Tension thrives and lessens, but never goes away
Combat is refreshing and vastly improved
Carver is introduced as a threatening and powerful rival
Some characters lack depth, such as Alvin – yet will probably be focused upon in a later episode

With expertly-paced action, Episode 2 – A House Divided raises the bar even further by matching the sinister events of the story with a delve into the nature of Clementine’s place among these mismatched individuals.