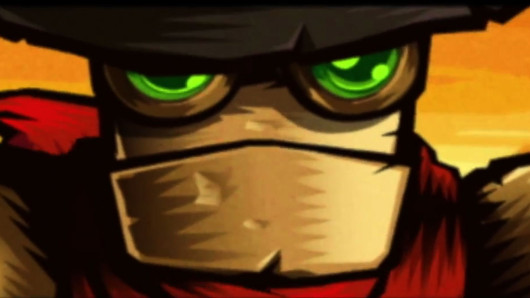 Typically, the Metroidvania genre emphasizes upgrade-based exploration, with hidden areas scattered about. What happens when the entire game is a hidden area? SteamWorld Dig: A Fistful of Dirt seeks to successfully answer this question, combining Metroidvanian aspects, addictive loot-collecting mechanics and one of the most charming worlds in recent indie memory.

There are two ways independent developers can persuade me to purchase their game. While having my television vomit candy and golden Sacagawea dollars is the preferred method, employing a Metroidvania-esque 2D exploration system gets me in the door every time. One of my favorite games of 2013, Drinkbox Studios’ luchadore-themed action platformer Guacamelee, demonstrated everything I love in a good side-scroller. I want to be able to move freely both horizontally and vertically, bashing enemies as I travel. The universe must feel compelling, whether through bizarre fiction, charming characters, or spectacular art design. Finally, I need some sort of upgrade mechanism to keep me from playing the game simply to beat it. Games that touch on all of these points compel me, providing the balance between frustration and joy that I desperately seek. While it isn’t perfect, SteamWorld Dig touches on these crucial elements enough to make it one of the better indie offerings on the PlayStation 4.

SteamWorld Dig was originally released on the Nintendo 3DS in August 2013, with a port to PC coming that same December. Players take the role of Rusty, a robot sporting a fashionable red bandana and a cowboy hat. Upon his arrival to Tumbletown, a desolate, western-themed village with a cast of bizarre robots inhabiting its boundaries, Rusty is told that his uncle has disappeared in the mines below him. Equipped with only a pickaxe, he sets off to find his missing relative, uncovering the dark secrets below Tumbletown’s surface.

The mining world you’re tasked with exploring is the highlight of SteamWorld Dig. Unlike a typical platformer, there isn’t a defined path for the player to travel along. While there are a few predetermined gaps here and there, the player creates his or her own path through the use of various mining tools. What makes SteamWorld Dig special is the overwhelming awareness of one’s own mortality. In addition to a health bar, one has to keep track of the constantly decreasing amount of light Rusty emits, as well as his tank of water, used to power automatic mining tools and Rusty’s super-jump boosters.

The finite nature of SteamWorld Dig’s resources means that careful planning is necessary at all times. If you run out of light, your chances of getting mauled by a monster lurking in the darkness increase dramatically. A lack of water could mean that Rusty becomes trapped in a given area, unable to reach the ledges necessary for an escape. Frequent trips back to Tumbletown’s surface become imperative, as this is the easiest way to replenish one’s resources. I found myself constantly debating how long I should stay below the surface for, as it is entirely possible to find light, health, and water in the mines. Do I take the risk of running out of light in order to continue my journey, or do I play it safe at the risk of slower story progression? 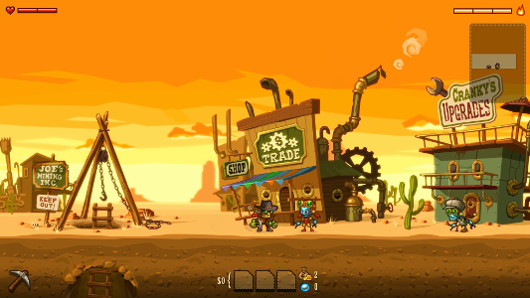 The surface of Tumbletown oozes charm.

While a platformer that combines precision and planning would make a good game on its own, what makes SteamWorld Dig great is its loot system. Blocks embedded with colorful gems provide hilariously-named materials that can be sold in Tumbletown. The first time I saw that you could obtain “Bronzite” and “Silverite,” I was, quite literally, in tears. Developers take notice, if you want me to play more of your game, insert nonsensical charm ad nauseam. When one sells loot to the quirky blue shopkeeper, Rusty’s level increases (unlocking new equipment for purchase). Next door, upgrades to ones health, water tanks, mining tools, and more can be purchased from the aforementioned blue robot’s father.

At first, these upgrades can be purchased using only money obtained by trading in raw materials, but as the player progresses, blue orbs will also need to be used as payment. These orbs cannot be purchased or traded for, meaning that the player has to constantly explore if he or she wants fully upgrade Rusty’s abilities. This robust loot system makes journeying to the surface seem like more of a joy than a chore. I found myself mining constantly, wondering what I would upgrade once I reached my next level. This mechanic almost completely removes the linearity from the game, as each upgrade rewards the player with more satisfying gameplay. Each section of the mine is dramatically different from its predecessors.

SteamWorld Dig plays more like an open-world game than a traditional platformer. There are three distinct underground areas to explore, with multiple required missions in each one. While a traditional platforming game tends to present levels one after another, in SteamWorld Dig, exploration is the key to progression. After a given mission is completed, you’re simply told to explore your surroundings. There are no instructions on where to go next; the mini-map does not immediately present you with an indication on where to travel. Instead, one has to journey deeper into the mines until he or she has come close enough to the next level to trigger a map notification.

Exploring is never a chore in SteamWorld Dig; the open-setting felt more rewarding than confusing. While I was constantly curious as to what happened to Rusty’s uncle, I wanted to find as many secret areas as I could (as these hidden rooms contained some of the most difficult platforming challenges in the game). The balance between open exploration and standard stage progression allows SteamWorld Dig to never  become stale. 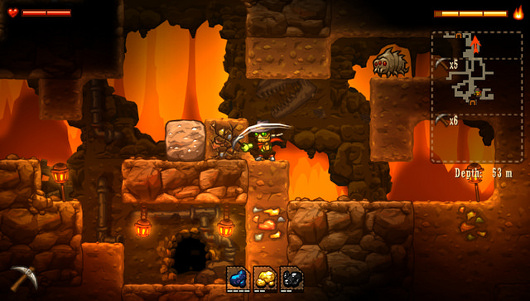 The ability to create one’s own path is one of the best parts of SteamWorld Dig.

However, I have a few issues with SteamWorld Dig, as the game is certainly not without flaws. The combat is clunky at best, and aggravating at worst. While Rusty does unlock a steam-powered boxing glove, allowing him to target enemies from afar, the vast majority of combat is done with his pickaxe. While some enemies can be easily defeated through careful swing-timing, I was never completely confident in my ability to defeat even the weakest foes. There were times where I used the exact same timing method on two separate enemies and had completely different results; I often found it better to leave enemies alone and forgo any loot collecting I may have done. Had it contained more weapon variety, SteamWorld Dig could have easily been a 5 out of 5 in my mind.

Even though I have praised the exploration and progression present in SteamWorld Dig, the game is still fairly short. I will fully admit that I was awful at this game; my final death count was 80, as I constantly found myself needing to self-destruct due to being boxed in by mistakes in the path I took. Even though my death toll nearly hit triple digits, I was done with the game in four hours and thirty minutes. Every time the player dies, they are brought back to the surface and have to retrace their steps to get back to where they previously failed. When one considers how much backtracking I did due to my lack of skill, SteamWorld Dig could be completed in half the time time it took me. Could I have explored more? Probably, but that’s often the case with countless games I beat. I certainly didn’t see every inch of Tumbletown’s mines, but I probably did a lot more wandering than most. 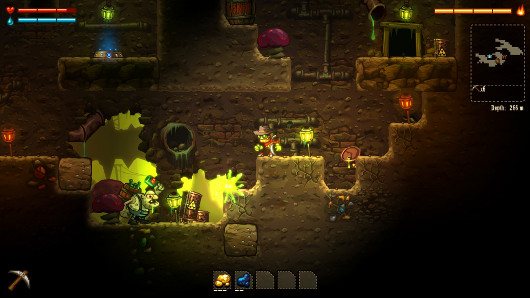 My final point of contention is the presence of only one boss. The final boss fight in SteamWorld Dig is outstanding, as it combines defensive maneuvers with the mining techniques that make the game shine. It took me a few tries before I could beat this boss, but I never felt cheated by any of my deaths. Some of my favorite gaming experiences are boss battles, with the best being fights that are both challenging and fair. Image & Form clearly demonstrated their ability to create a quality boss; I just wish that they had taken the time to create more than one. This battle is the greatest individual moment of the game, and I would have liked to see what else the developers could have done.

SteamWorld Dig: A Fistful of Dirt is one of the best indie offerings on the PlayStation 4, and its gameplay lends itself perfectly to the Vita as well. If you’re a fan of exploration-based gameplay, precision platforming, and charming environments, this is certainly a title to pick up. SteamWorld Dig is certainly not perfect, but it comes close enough to capture the hearts and minds of those who are willing to give it a try.