The past few weeks have seen the release of multiple high-profile, AAA titles like Titanfall, Metal Gear Solid V: Ground Zeroes and InFamous: Second Son, as well as re-releases of classics like Final Fantasy X and X-2. I have purchased all of these (much to the detriment of my wallet) but despite the undoubted quality of the games mentioned, it has been a different title that has dominated my time for the last few days – namely LUFTRAUSERS.

I originally got to go hands-on with the PC version of LUFTRAUSERS at last year’s Eurogamer Expo. I left impressed and knew that the Vita version of the game would be my choice as the gameplay seemed to suit the platform’s mobility and controls. Was it the right choice?

Yes, undoubtedly yes. For the last few days, I have been missing my stops going to and coming home from work because of this game (actually, wait a minute, I may need to change my answer!). It was also the obvious choice as it is a Cross-Buy title, so I only needed to purchase it once to own both the Vita and PS3 versions. 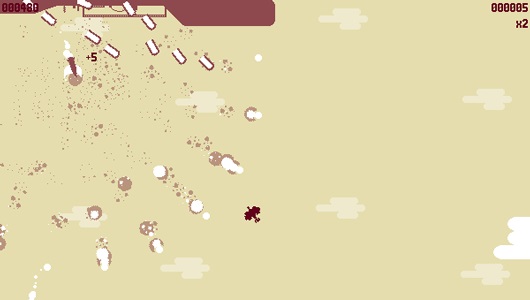 So what has kept my focus on the Vita’s screen rather than my Underground stop? Put simply, LUFTRAUSERS’ frenetic, addictive and colossally fun gameplay. Vlambeer have made a name for themselves with titles like Super Crate Box, Ridiculous Fishing and the upcoming Nuclear Throne as connoisseurs of delectable game mechanics. Like the aforementioned games, LUFTRAUSERS continues the trend of easy-to-pick-up but difficult-to-master gameplay. The physics of the game are based on gravity and thrust. Using the left analog stick or D-pad allows you to point your plane in the right direction but momentum and the power of your engine play a part in how quickly you move in a given trajectory.

The premise of the game sees you taking control of a ‘Rauser’, a customisable plane made up of three core parts – the engine, body and weapon. You are tasked with taking on the forces of, well, evil, I assume –  to be honest, this is never explained to you, but the attire and demeanour of your colleagues suggest you may be on the wrong side! Acting as a lone wolf, you must take on a variety of air- and sea-craft, ranging from bi-planes your own size, to battleships and blimps that take up most of the screen! The longer you stay alive, the more enemies appear – and things go from manageable to insane quickly. 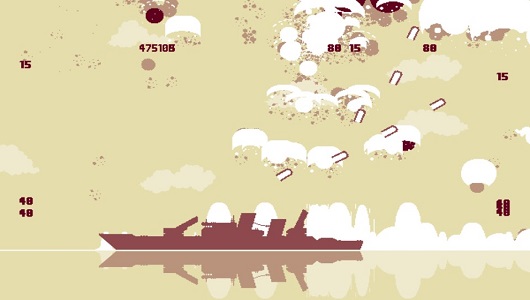 The customisation options are unlocked by completing various tasks, like destroying a certain number of enemies when at the maximum combo level or reaching a total of ships sunk. Once unlocked, you can equip a number of imaginative, alternative engines, bodies and weapons, to help you in your next battle. The options are extensive and change up the gameplay considerably. Not content to simply offer you a heavy/slow or light/fragile choice, LUFTRAUSERS allows you to pick an engine that propels itself by firing projectiles from its exhaust or a weapon consisting of multiple homing rockets. Each configuration also gives your Rauser a new designation, like The Vulture below. 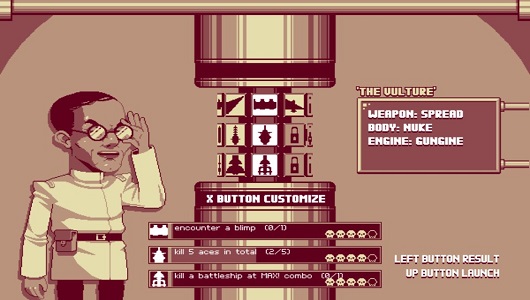 Playing around with the combinations is encouraged by changing the tasks you are aiming for when a new item is selected – though you will quickly find your preferred configuration for those times you want to best your friend’s or your own high score. You will die, frequently, in LUFTRAUSERS but the speed at which you come back for more is only bested by Super Crate Box’s rapid return to action. This means you do not dwell on your death but instead have to immediately start concentrating on your next goal. With no significant tutorial to guide you, there are some valuable lessons you can pick up on early, such as diving into the ocean will cause damage to you but may be less than the damage you get above – at least temporarily. 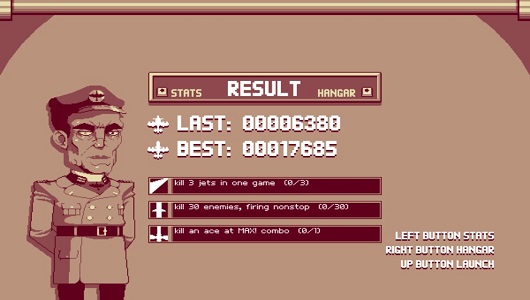 The visuals are basic but charming nonetheless. The sepia colour scheme and silhouetted style is easy on the eyes and in keeping with the nostalgic feeling Vlambeer are trying to evoke with its setting. The soundtrack is equally complimentary of this, with its militarist drum beats and rhythms. With a game that seems to pride itself on its customisability, it is disappointing though that more options have not been made available to change the aesthetics.

Fast-paced, addictive gameplay that changes based on your Rauser configuration
A massive amount of customisation available
The gravity-based physics add just enough complexity to a simple game mechanic
The customisation does not go as far as the visuals or soundtrack

I have spent far too much time with LUFTRAUSERS already and that obsession does not seem to be coming to an end. Vlambeer’s knack for superb gameplay and quick-fire mechanics seems to be continuing – and long may it do so.