When Fez, an acclaimed independent puzzle-platformer, was first released almost two years ago, I’m not sure I was at the right place in my life to appreciate it. When the port was announced for the PlayStation ecosystem, I knew I finally had to dive in and see what the fuss was about. Had I not played Fez, I would have missed out on one of the most unique gaming experiences in years. While it may appear simple on the surface, it is perhaps the most complex game I have ever played.  Stunningly gorgeous, Fez is one of the clearest examples I can think of as to why video games are an art form. Simply put, Fez is a masterpiece.

When I started typing out this review, I found myself constantly hitting the backspace button. My thoughts were jumbled to the point where I was having difficulty forming a logical argument. The thoughts, feelings, and opinions were there, I simply couldn’t translate them into cohesive sentences. In trying to express the profound impact Fez had on me, I tried using personal anecdotes, hyperbolic praise, and discussions of the industry as a whole. No matter what I tried, nothing seemed to illustrate my point in a way that I found suitable. The utter confusion I was feeling was frustrating, and I had no idea how I was going to articulate my opinion. I was on my third or fourth attempt when I realized that the feeling I was experiencing was oddly familiar, too familiar to be a coincidence. Expansion of this realization led to a true light bulb moment: it was the exact frustration I felt while playing Fez.

Why might you ask, would I give a perfect score to a game that completely frustrated me? It’s a valid question, as games are generally meant to be fun. Although Fez made me want to tear my hair out at times, I realized that this was actually a clever game mechanic rather than a fault. A brilliant lesson in how perspective can change reality, Fez is meant to challenge the way in which you view a particular situation. 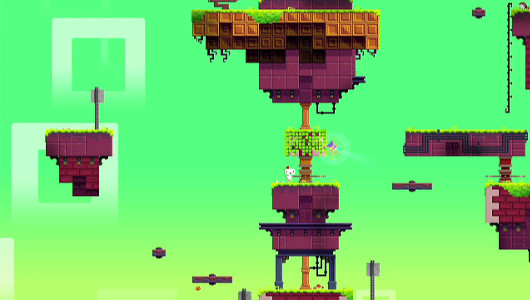 What seems like an impossible platforming scenario is actually quite possible. 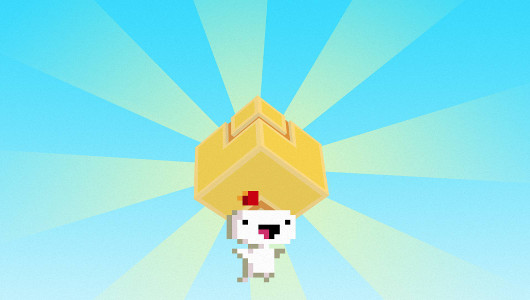 The message of Fez is rather simple, not everything is as it seems. While each area is still two-dimensional, Gomez gains the ability to shift the world as he sees fit. Each area has four distinct sides, and a press of the trigger allows Gomez to turn the area, causing platforms to shift to new locations. What may seem like an unreachable platform is merely a shift away from accessibility. This mechanic, combined with some of the most obtuse puzzle design I’ve ever encountered, makes Fez brilliant. I often forgot that I could only see one-fourth of the world, causing me to get stuck for significant amounts of time. The aforementioned frustration was followed by moments of intense satisfaction, as I felt that I had truly accomplished something by solving the previously unsolvable.

You are given the task of finding 32 cubes, and how you go about doing that is entirely up to you. The two types of collectible pieces present, “cubes” and “anti-cubes” each come with their own set of challenges. Finding regular yellow cubes requires one to master platforming, perspective-switching, and navigation. They’re often in plain sight, but figuring out how to get to them is what’s difficult. Anti-cubes present an entirely different challenge, as these require solving vague puzzles, often free of any discernible clues. My favorite puzzle involved the use of subtle sound cues, which the player could easily miss. Had I not been wearing noise-cancelling headphones, I wouldn’t have realized a puzzle was even present in the first place. Subtle bass tones constantly shift from ear to ear, requiring the player to memorize the sequence and map it to corresponding controller buttons in order to solve the puzzle. Creativity oozes out of the anti-cube puzzles, with palpable satisfaction coming after solving each one. 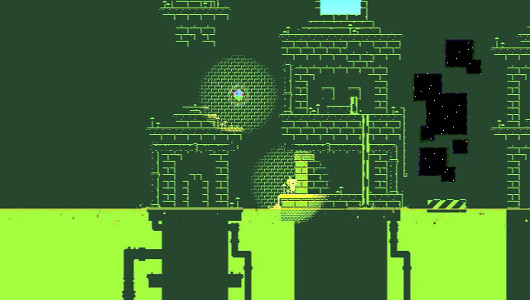 There is no mini-map in Fez, no objective markers guiding you. If you miss a door at any point, you can find yourself wandering aimlessly for hours, unsure of where you’re supposed to be. This lack of direction is a brilliant choice by creator Phil Fish, as it is a slap in the face to any game that holds your hand. While there are distinct areas to explore, it is often difficult to figure out how to get back to a given location without finding a four-sided warp-gate. If this sounds intimidating, that’s because it absolutely is. You’re supposed to get confused, that’s what makes finding the correct path so rewarding. The hopeless feeling of being utterly lost is a powerful teaching tool, one that allows Fez‘s message to be conveyed with ease. If you find yourself stuck, perhaps you need to look at the problem through a different lens. 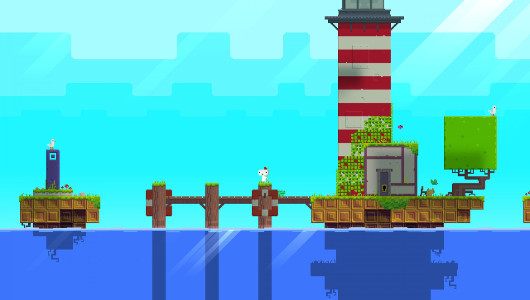 Highlighting the brilliant gameplay is the beautiful pixelated world Fez is set in. This game is the perfect example of why video games are art, as its beauty is apparent through endless deliberate design choices. Sure, games like inFAMOUS Second Son and Ryse: Son of Rome are stunningly beautiful in their realism, but there is something to be said about the care that went into the creation of Fez. Every pixel has a purpose in its placement; nothing is included without reason. The bright colors and extreme level of detail make Fez an absolute joy to behold. While a given worm crawling on the ground is technically just four green pixels, its inclusion helps bring a forest to life. A headband on an NPC provides personality, even though it’s simply a black rectangle with some gibberish on it. Nowhere is this beauty more apparent than on the PlayStation Vita, the version I consider to be the definitive edition of the game. Fez is gorgeous in any setting, but the Vita’s screen really makes everything pop. For those who think that resolution is king, might I present Fez as a reason why it is most certainly not.

Fez was everything I hoped for and more. Its simple, yet profound message is presented in a way that doesn’t feel cheesy or contrived. I was only able to start writing this review through embracing how solving a problem is often just a matter of changing one’s perspective. It is one of the most important independent titles of all time, an example of how far the creativity of one man can go. I consider Fez to be an absolute must-play for anyone who appreciates game design. Before playing it, I wondered how a simple pixelated platformer could take Phil Fish five years to make. After experiencing its unbelievable complexity, I’m almost surprised it didn’t take five more.