Going to see a new movie without any prior knowledge is very difficult nowadays. There are trailers being shown on TV, posters being displayed on buses and opinions about every piece of a movie’s components being thrown about liberally online. This task is next to impossible when the movie in question is a remake. No matter how hard you try, your brain will always begin to make comparisons. The good news is that José Padilha’s take on what is essentially a modernised, or rather future-ised, retelling of the Frankenstein story does not tread over old ground, thus avoiding these issues – or at least, some of them.

For the uninitiated, while I would firstly suggest you track down the original as it truly is an 80’s classic, I will give you a plot appetiser, for the purposes of this review. Omnicorp, a large American corporation, sets its sights on overturning a law that bans the sale of their robotics products in the US. In order to do this, OCP CEO Raymond Sellars (Keaton) enlists the help of his chief researcher and scientist Dr. Norton (Oldman) in building a new type of machine – specifically one with a conscience that Americans can get behind. Unfortunately, at the same time, Det. Alex Murphy (Kinnaman) is severely injured in an explosion that was meant to kill him. This gives Sellars the perfect opportunity to create the product he needs – but what happens when the human side to Murphy begins to take control from his corporate masters?

Well, watch the movie and find out, I guess. 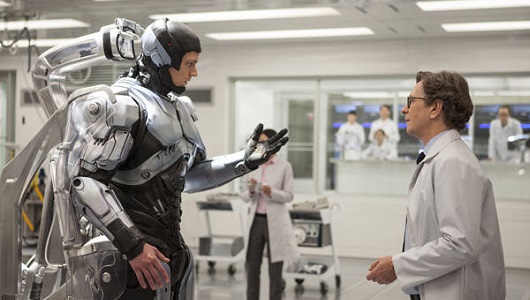 This is not just a statement of the obvious; it is also a recommendation. RoboCop surprised me – I was ready to dismiss it as a money-making exercise (and the cynically side of me says it still is) but at the same time, Padilha decides to tackle a different set of themes to the original. While you might say the consumerism is still there, this year’s release aims its sights at the political and corporate systems, as well as their corrupting power. Issues like the ethics of using drones, of the ghost in the machine and free-will are relevant to the here-and-now – giving the entire movie its first leg to stand on. 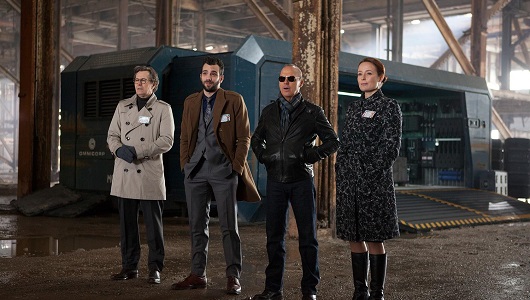 The second comes from the cast. Kinnaman and Abbie Cornish are solid as the central couple in this story, with Keaton clearly relishing the role of a single-minded, consumer-driven suit (ironically, he is mostly in casual attire). However, it is Gary Oldman who provides the arc of the story. His take on Dr. Norton is initially empathetic, but the promise of research funds and backing for his projects colour his view. The movie follows his ethical dilemma throughout and Oldman is excellent in the role. 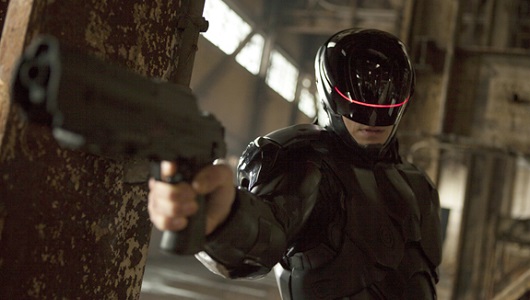 If there is a chink in the armour, again ironically, it is in the action. There is absolutely nothing memorable about the set-pieces in this movie. Unlike the battle with the ED-209 in the original, its equivalent fight in the lobby of Omnicorp here is devoid of any excitement or exhilaration. The humour from the 80’s RoboCop is also mostly absent – though, I will admit that the few moments of wry smiles, like Samuel L. Jackson’s take on a ‘Fox News’-like media personality, are well done.

Tackling different themes helps to avoid comparisons to the original
Oldman is in fantastic form, delivering the arc of the story
The humour is sparse but effective
The action is largely forgettable

RoboCop is not perfect. There are issues with the script at times, and the pacing is a tad inconsistent elsewhere – but the story and characters are well-realised. As I mentioned, I would recommend this – in fact, I would indeed purchase it with some US currency.