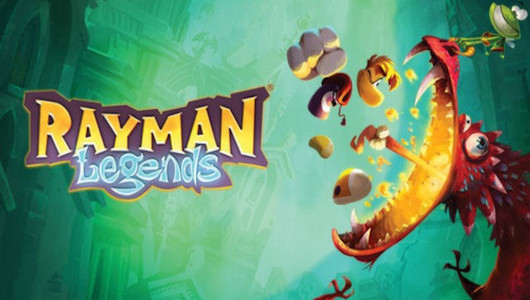 Rayman is a series which I – and many others – have much love for. I still own the very first game for the original PlayStation and at the time it was definitely one of the most challenging and unique platforming games I’d played. After a period where the limbless hero fell from grace to be replaced by those pesky Rabbids and their frankly mediocre games it seemed like Rayman was gone forever.

Cast your minds back to 2011 however, and Rayman came back with a vengeance. Rayman Origins was not only a return to form for the series, but was a breath of fresh air in a time dominated by the shooter genre. I didn’t think it would be possible for Ubisoft to top the success of Rayman Origins with a sequel. I couldn’t have been more wrong.

What was originally a Wii U exclusive title, Rayman Legends can now be found on nearly every console under the sun, the most recent addition being its launch on the PlayStation 4 and Xbox One – which is the subject of review today.

At a glance, many would dismiss Rayman Legends as the same game as Origins. Whilst this could be true in a sense – the entirety of Rayman Origins (to an extent) is back in Legends – it’s the little things that make a difference. Rayman Legends is a sequel that refines, enhances and polishes everything that made its predecessor so good.

There isn’t much in the way of story to speak of in Rayman Legends. The game’s plot is laid out in an opening cutscene. Rayman and his friends have been sleeping for a century after the events of Rayman Origins. The Magician from the previous game has split himself into five “dark teensies” and has unleashed nightmares upon the world. Upon being woken up by their friend Murfy, the heroes set out to rid the world of the nightmares. From here on out, he game’s story is told loosely through the gameplay. 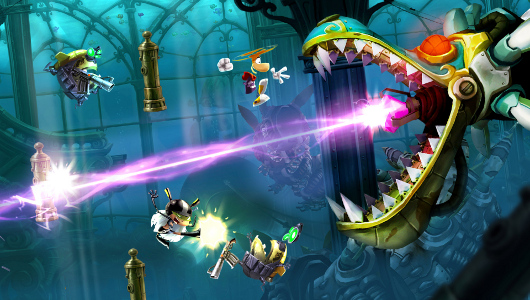 Rayman Legends boasts a myriad of varied, colourful and challenging levels. There are six new worlds – along with the worlds from Rayman Origins – to explore, each with a distinct theme. These worlds offer a handful of normal levels, boss levels and they eventually culminate in a musical level with the likes of Black Betty and Eye of the Tiger playing in harmony with the gameplay. These levels brought a massive smile to my face and there are also 8-bit versions – which are substantially harder – to unlock and complete. The soundtrack is simply wonderful. It’s mesmerizing, memorable and compliments the gameplay very, very well. There are a variety of enemies in each world too – each world has differing enemies to fit their themes – and each of the bosses you face near the end are equally challenging and varied, my favourites being a giant toad and a luchadore.

Upon completing worlds you’ll also unlock “invasion” levels which are additions for previous worlds and their levels. For example, enemies from one world will appear in an “invaded” level in another world. The objective of the invasion levels are to complete them as fast as you can before Teensies strapped to fireworks ignite and fly off. They’re essentially time trials, but they’re challenging and a lot of fun to complete.

The game also has a reasonable difficulty curve. You begin with levels which give you plenty of checkpoints and allow for backtracking through them if you miss anything. As you progress you’ll eventually come to levels that can become borderline frustrating. Against the clock, with less checkpoints and levels that almost need to be memorised flawlessly, they’re very challenging and you’ll definitely be hitting the restart button multiple times. You’ll not be restarting the level due to bad design though, every death in Rayman Legends left me thinking about what I – the player – could have done differently to get through the tricky parts of the later levels. My only complaint is that the younger audiences whom Rayman Legends will most likely appeal to will probably find these levels impossible to get through. 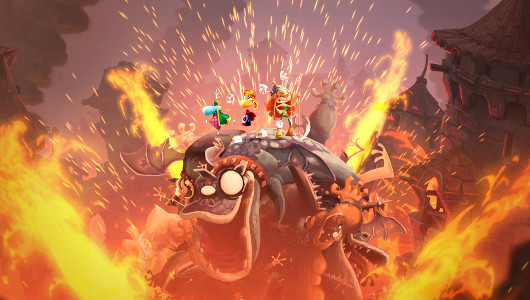 Rayman Legends offers a massive amount of replay value, not only do you need to attempt to rescue all of the Teensies from each level – as Teensies unlock further worlds to play – but you also have the Lums to collect too. Lums unlock new character skins to play in, with one million Lums unlocking the final skin. They also unlock trophies for collecting enough of them in a level, award you with lucky tickets which can be used to obtain extra levels from Rayman Origins and also give you even more Lums and Teensies as well as collectible creatures. All four of the playable characters – Rayman, Globox, Teensies and Barbara – have a great variety of alternate skins to choose from, many of which nod their heads to other Ubisoft intellectual properties. Depending on which platform you play on you’ll get exclusive skins, for example the Wii U version has Mario and Luigi skins, the Xbox One has Vaas from Far Cry 3 and Sam Fisher from Splinter Cell, whilst the PlayStation 4 has an Assassin’s Creed outfit.

The game also brings back local co-op from its predecessor, allowing you and up to three friends to play. Whilst the Wii U version offered another player to use the gamepad screen to control Murfy and manipulate levels to allow other players to procede the feature is all but relegated to a single button press on other formats. It’s a little bit disappointing as I feel Xbox SmartGlass and the PlayStation Vita could have been implemented to use this feature. I was also a little bit disappointed at the fact that there is no online co-op, but that could be classified as nit-picking as it doesn’t stop you from being able to challenge friends and others from across the world.

The challenge mode in Rayman Legends allows you to take part in a daily challenge or a weekly challenge – or the “extreme” version of them. These challenges bestow bronze, silver or gold trophies upon you for doing equally as well or better than your peers. Whilst it’s still early days on the next gen consoles for Rayman Legends, the variety of challenges include the likes of getting as far as you can into a moderately difficult level or collecting a certain number of Lums in as low a time as possible. 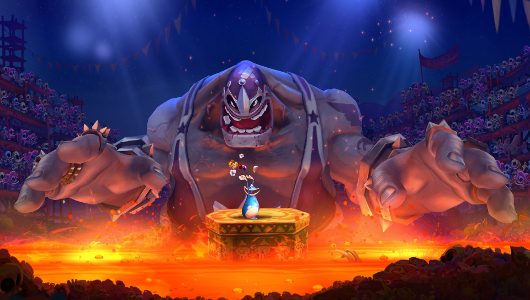 In terms of making the jump to the Xbox One and PlayStation 4, there isn’t really anything you’d notice that is glaringly different from the Xbox 360 and PlayStation 3 versions. Two things that do stand out though are the reduced loading times – which are almost non-existent – and the upped graphical capabilities, the game looks absolutely gorgeous. Rayman Legends also has a very reasonable entry price if you’re buying on Xbox One/PS4 and have never played before. Whereas something like Tomb Raider: Definitive Edition had the nerve to charge nearly fifty pounds for what was essentially a year old game, Rayman Legends starts at just over twenty pounds up to thirty. The digital versions being slightly more expensive at around thirty five pounds. Something you should also keep in mind is that there’s a sizable chunk – if not the entirety – of the levels from Rayman Origins in the game too. You’re almost getting two games in one. It’s the perfect price for anyone playing for the first time or looking to upgrade to the new consoles.

Overall, Rayman Legends may not reinvent the wheel when compared to its predecessor. However, it capitalizes on the good ideas that came before it and refines them to create a game that surpasses Rayman Origins. There’s very little I can say about Rayman Legends that’s negative aside from the nit-picking of no second screen support and no online co-op, both of which are trivial. It’s a masterfully crafted game and it’s brilliant to see that the series return to form wasn’t just a one hit wonder. If you’ve never played Rayman Legends and you own an Xbox One or PlayStation 4, then now is the time to jump on board and experience it. The limbless hero is back on top as one of the platforming kings.