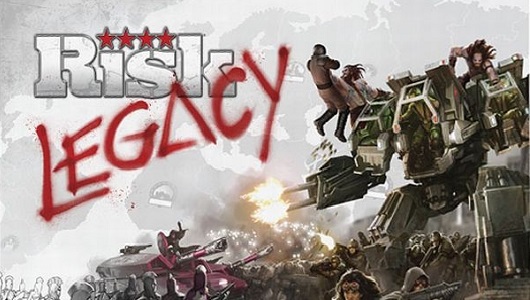 Risk Legacy is a game of consequences and repercussions, one whose world is altered by the conflicts that precede each session. Factions grow and develop over time, their ‘character sheets’ upgraded RPG-style with unique abilities whilst the board itself undergoes more dramatic change as battles trigger the placement of stickers representing vital resources or reinforcements, drastically altering the value and strategic merit of the continents.

Aside from this however the moment to moment rules of Risk are the same as they ever were, with the turn by turn building up of armies that are then smashed against each other in waves that repeat over and over and over. Regardless of the map’s unique stats, turtling to build up a giant army is always the preferable choice and games devolve almost immediately into fighting to ensure that no one player pulls too far ahead. The interest comes almost solely in the manipulation of the battlefield, engineering the circumstances to ‘unlock’ a pack of event cards which could result in a new sea-way linking Australia to North America or the rendering of Europe uninhabitable to all but the new mutant faction, spawned from the ashes of a nuclear winter.

These surprises are always hilarious and memorable, but in the end they are nothing but surface gloss to distract from a game that would otherwise be obsolete to anyone with a passing interest in modern board gaming. I believe my group is now ten games into the fifteen game ‘campaign’ and had I reviewed it earlier, say around game three or four, this would probably have garnered a more positive rating when the thrill of the new was still fresh in our minds. However later games have become deeply repetitive and I doubt those final five will ever take place. 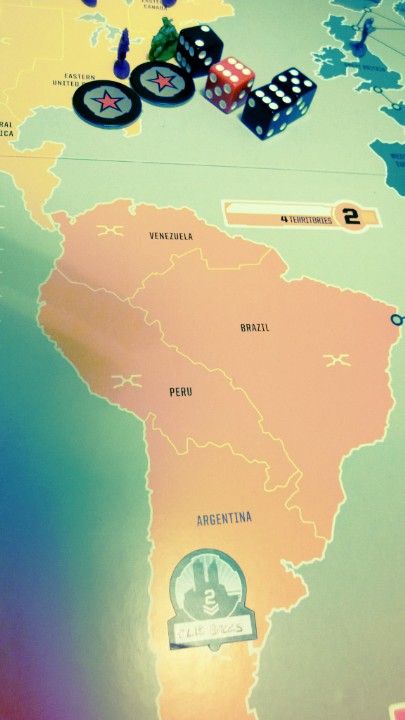 That’s not to say the gimmick isn’t worthwhile though, as board games vie for attention against their digital counterparts it’s fitting that they should take full advantage of the physicality of their medium and revel in a level of permanence that can only be achieved by the act of irrevocably destroying or changing something. The idea of a consumable rather than collectible board game is thrilling and something I am ready to buy into wholesale.

There is an irresistibly punk aesthetic to defacing one of the medium’s classic titles but Risk Legacy pulls it punches. Nothing short of total Armageddon would have made this reviewer happy.