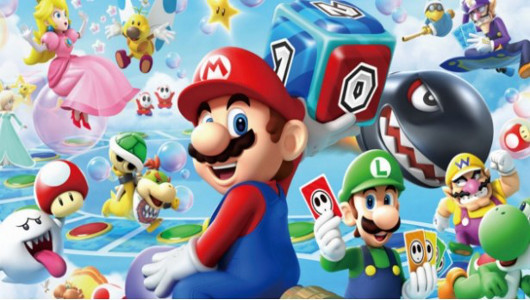 I’d never played a Mario Party game before Mario Party: Island Tour. To some that statement could come as a surprise and to others it could be a sign of heresy. Either way, I’m a complete newcomer to the series. One thing I do know however is that recent titles in the series haven’t necessarily been up to par with what was on offer in the N64 days.  After playing Mario Party: Island Tour I can honestly say that I was left neither wholly disappointed, nor entirely impressed with what was on offer.

Mario Party: Island Tour is – like previous games – based around the idea of a board game. You pick a character from the Mario series and attempt to get to the end goal of the board before your opponents through dice rolls. There are seven different boards to play on and each is unique in their own way as they have different objectives. Boards such as Rocket Race and Banzai Bill’s Mountain are short and simple – get to the end of the board first. On the other hand a board such as Star-Crossed Skyway isn’t about getting to the end goal first, but rather about collecting as many stars as you can along the way through mini-games and by reaching checkpoints on the board before your opponents.  Each board has an estimated completion time, so if you’ve got fifteen minutes to spare then Banzai Bill’s Mountain is probably the board for you. If you’ve got an hour to kill, then a board such as Perilous Palace Path is your best bet.

The minigames are the bread and butter of Mario Party: Island Tour. No matter what board you’re playing on you’ll always be playing them. They offer differing – board specific – rewards based on whichever position you finish within them. These can range from extra dice rolls, items, stars and magic cards. There’s a good variety to the mini-games and most of them work well, but some of them just don’t. I had a lot of trouble with the mini-games that made use of the 3DS’s built in gyro. Tilting the system to take pictures or move around an on screen ball ended up with me being overly frustrated at how horribly implemented and unresponsive it was, even after re-calibrating my system. A lot of the mini-games are also based on pure luck too. One in particular – called “Blooming Nuisance” – sees you picking a plant, watering it and hoping it doesn’t turn into a piranha plant and eat you. It even goes as far as using “…hope for the best” in it’s description. There’s very little in the way of a challenge most of the time, which is disappointing. 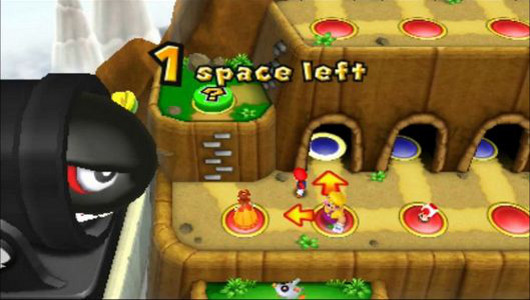 Every board you complete – regardless if you win or not – awards you with Mario Party points. These can be used in the collectibles shop to unlock trophies of characters. Whilst it’s a nice touch, it won’t appeal to everyone. Though nobody is going to get upset if you just ignore them like I did.

You can also play the mini-games independently of the boards if that’s your thing, or you can attempt a time attack challenge and see how fast you can complete 10 mini-games in a row. There’s also an extra challenge mode titled Bowser’s Tower which sees you attempting to ascend a massive tower to defeat Bowser. Each floor challenges you to a mini game and every fifth floor offers a boss such as Chain Chomp or Mr. Blizzard who you attempt to defeat in their own individual mini-game. Again, Bowser’s Tower is based on an element of luck. Every so often Bowser will appear to spin a roulette wheel which will – more often than not – trip you up horribly by landing on something such as “Drop down one floor”. Although there are chances it will land on “Ascend to the top of the tower”, the odds of that happening aren’t in your favour. 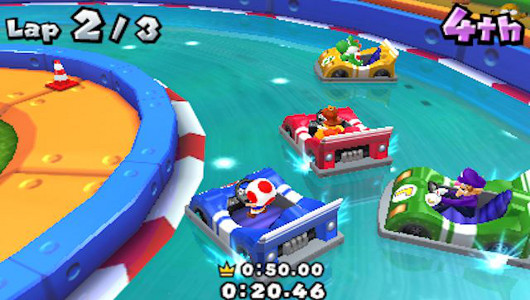 At it’s core, Mario Party: Island Tour is a game that is meant to be played with up to three other people and it is relatively easy to do so. Download play is an ingenious little solution – introduced with the original DS – which means that only one person needs to own a copy of Mario Party: Island Tour in order for three others with 3DS consoles to play along with you. This makes it the perfect downloadable title for the 3DS, a game you can always have ready to go if you have a moment to play with friends. Whilst it’s all well and good playing against A.I., they can be inherently rubber-bandy. They’re always able to trip you up if you get too far ahead through item usage or by getting an impressive roll of the dice. Playing with others though also allows you to see the crushed looks on their faces as you cross the end goal and – let’s face it – it will more than likely end a fair amount of friendships.

Good old fashioned fun when you get three friends together
Good variety in boards and minigames
The perfect downloadable title for the 3DS
A lot of minigames are based entirely on luck
Minigames relying on the 3DS’s gyro are awful
A.I. players can only amuse for so long

Mario Party: Island Tour is definitely fun, but it’s a very short lived ride unless you have a group of friends or family to play with constantly. It’s the perfect downloadable title for the 3DS and is the perfect way to kill some time. There’s a good amount of variety to the game in terms of the boards and mini-games on offer – even if some of them are quite broken with gimmicky gyro features and luck based gameplay. At the end of the day though, it’s not exceptionally good and it’s not overwhelmingly bad either. It’s just a bit ‘meh’.