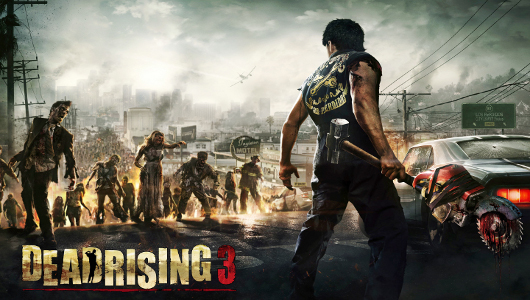 I want to make it perfectly clear from the get go that I have a love/hate relationship with Capcom games. I’ve never been into Street Fighter but can see why people love it, I don’t get on well with Lost Planet and go through phases with the Resident Evil series. But we’re here to talk about Dead Rising today, and this series has been no exception to the aforementioned love/hate relationship.

The original Dead Rising came shambling along at the start of the last generation, it was one of the standout early launch titles on the Xbox 360 that quickly gained a fan following. It wasn’t without its problems though. Dodgy controls and save systems accompanying a game which pretty much punished you if you slipped up wasn’t exactly my idea of fun. In fact I’d go as far as to call the original game aggravating.  In 2011, a sequel – Dead Rising 2 – addressed some but not all of the issues I had with the first game. I enjoyed the game a lot more, but because I messed around so much and didn’t take into account I was on a time limit I messed up and was essentially told to start again – which I didn’t.

You see, the one thing I’ve never understood about Dead Rising is the fact that it gives you a sandbox with lots of toys to play with and then forces you to play at the pace it wants, which I feel sucked the fun out of it.

Now here we stand, a new generation of consoles has been unleashed upon us and a whole host of launch games to go with it. Dead Rising 3 is one of those launch games. Given my experiences with past games in the series and the initial E3 showing of the game I was apprehensive about it to say the least.

Well, after sinking a good twelve hours into the game – that’s how long it took me to finish the story/side missions which isn’t half bad – I can honestly say that Dead Rising 3 is more than just a massive step up on its predecessors, it’s by far one of the best launch games you could possibly pick up for the Xbox One. 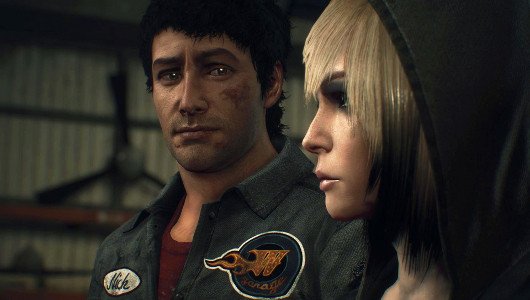 The story of Dead Rising 3 picks up 10 years after the events of Dead Rising 2. You play as Nick Ramos, mechanic extraordinaire who can build a limitless amount of combo vehicles and weapons with nothing but his bare hands. Long story short, Nick’s home city of Los Perdidos has been quarantined due to a – you guessed it – zombie outbreak and it’s now up to him and his rag tag group of survivors – Rhonda, Dick (who also acts as the co-op player) and Annie to find a way out of the city before the government firebombs the place in six days.

Yes, Dead Rising 3 is still on a time limit. But, it literally takes about one full day of game time – that’s 24 hours for you uneducated types – to run down the timer completely. I completed the story, all side missions, psycho fights and rounded up a fair few collectibles in half that time. It gives you more freedom to explore the world which is a godsend in a Dead Rising game. Speaking of which, gone is the cruel and unforgiving save system from the previous games. Dead Rising 3 now autosaves and you can also save and quit at any time you want. That’s pretty much my two biggest gripes with the series fixed right out the gate. Though if you still prefer the classic unforgiving nature of the previous games then Nightmare mode is most certainly for you. You only get two in game days to finish Dead Rising 3 as opposed to the six it usually gives you. I’d recommend being fully kitted out with combo weapons, food and attributes before tackling it however.

Speaking of attributes, Dead Rising 3 allows you to level up Nick whichever way you want. When you gain a level you gain attribute points which can be put into various skill trees such as health increases, weapon durability, melee damage, ranged damage, survivor health etc. It adds a fair bit of progression to the game and the final tier of these skill trees can only be unlocked once you hit level 50, encouraging multiple playthroughs.

The world of Dead Rising 3 is the biggest in the series so far and is also the most fluid. There are very few loading screens when you’re out and about in Los Perdidos, the only exceptions seem to be when cutscenes start. On the other hand, there might not be very many loading screens but there is a significant amount of texture pop-in and the occasional framerate drop when you’re in vehicles. It’s not enough to detract from the fun of the game but it is noticeable and it doesn’t really make the best of impressions if you want to show off the power of your fancy new next-gen console. Overall, the game feels like a slightly enhanced previous generation game, not a next-gen one. 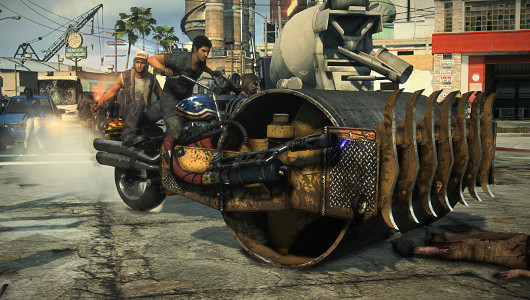 Vehicles are key to getting around Los Perdidos, you can find them on the streets and you can also combo two vehicles together to create big scary looking things like the signature Rollerhawg – a combo of a motorcycle and a steamroller. My one complaint about the vehicles though is that they feel very cumbersome to control. Couple this with the fact that a lot of the streets in the city are barricaded and a lot of the vehicles seem to be made out of paper mache and quavers, getting around Los Perdidos feels more like a chore than fun sometimes.

Inside this sandbox however there are a metric tonne of things for you to do. Not only is the world populated by zombies – and there are a LOT of them on screen this time around thanks to the power of the Xbox One – but there are also lots and lots of collectibles for you to find too. These range from blueprints for new combo weapons, collecting Frank West statues, clearing safe zones to allow you to re-arm and heal yourself whenever you need, destroying ZDC speakers and collecting ZDC app updates which add to the Xbox One SmartGlass app on your phone. This app can give you extra missions and allows you to call in airstrikes, which is a nice touch if you own a smartphone. Come the end of the game I was nowhere near to having collected everything, and rest assured I’ll be going back in order to do so.

There are also random survivor encounters which allow you to gain extra PP (read: EXP) and you will also be contacted sporadically about people who need help or will be told of the whereabouts of psycho missions. Psycho missions are the bread and butter of the Dead Rising series. They’re fun and the psychos are by far some of the most vibrant and creepy characters in the game, they can also present quite a bit of a challenge if you don’t tool up before heading into one. They’re also pretty varied, along with most of the story and side missions in Dead Rising 3. One of my favourites was a short but sweet side mission where you have to round up three “hot male zombies” into a set for a bloke who wants to make a raunchy film and get rich off of it. Dead Rising 3 is still as absolutely bonkers as its predecessors.

Sometimes these side missions will yield survivors who will accompany you. However for the most part it feels like a babysitting job, just like the past games. I failed one mission because my AI partner refused to get into my car and had her face mauled off by about 50 zombies. You can return these survivors to a safe zone by either going to one, or, my favourite way; getting in a car and flooring it away from them so fast they up and leave you. 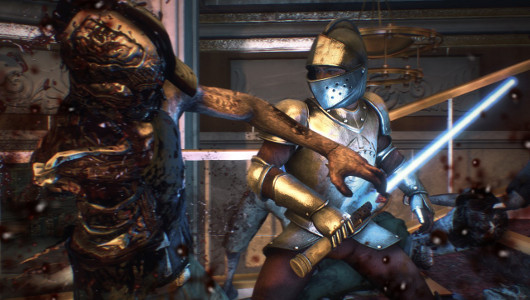 One of the best features of Dead Rising 3 is the insane amount of customisation of weapons, vehicles, food and yourself. There are over 100 combo weapons to create, my favourite of which were the Chop-N-Talk (a battleaxe that speaks to you in a Stephen Hawking-esque voice) and the Boom Bear (a variation of the Freedom Bear, but with explosives). Finding a new blueprint is like being given a new toy as a child. You won’t know what it does till you try it and more often than not it’s hard to decide which weapons you want to take with you given your limited inventory slots. Worry not though, even after your favourite weapon breaks you can get it back at any safe zone or through a mobile locker – something you get from leveling up attributes. You can also deck Nick out in some new threads ranging from the simple to the insane. Fancy dressing up as a Knight? Sure thing! Personally I dressed in a child’s super hero outfit and donned an afro and some aviator glasses.

Dead Rising 3 also features co-op. I played a fair amount of this both with people I know and with random players. It’s a lot of fun playing with friends but with unknown people things can become a bit of a chore when you’re trying to do specific things. Communication is key in co-op, otherwise you’re going to have a frustrating time. I also experienced a fair few connection drops, whether this was just my internet connection or the servers is beyond me however. At the end of the day though, playing with others can be a lot of fun, and that’s how it should be in an open world game.

Overall, Dead Rising 3 blows the previous games in the series out of the water. It has its issues here and there for sure, it’s not perfect, but it fixes most of the things that made me dislike aspects of Dead Rising and Dead Rising 2. As far as launch titles on consoles go though, it’s a very solid one. If you own an Xbox One, Dead Rising 3 should definitely be in your library.