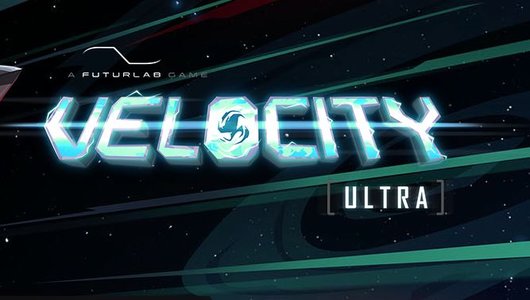 Originally released as a Playstation Mini back in May 2012 for Playstation 3 and PSP; Velocity by FuturLab saw a HD upgrade almost exactly one year later for the Vita in the form of Velocity Ultra. Boasting updated visuals and effects, making it “everything Velocity should have been the first time around”. Now with the sequel, Velocity 2X set to hit the Playstation 4 and Vita in 2014, FuturLab have decided to release Velocity Ultra on the Playstation 3, and I’m so happy they did.

Taking control of the Quarp Jet, the player must navigate through stages collecting survivor pods, and blasting through waves of enemy ships and security drones in tried and tested arcade shoot-em-up goodness. On paper, the gameplay sounds easy enough (and for the first few stages it is), but when Velocity Ultra takes off, it becomes a master class in twitch reactions. It only takes one wrong decision and the stage has to be started over. The screen is constantly scrolling up, and holding R1 activates a boost causing it to scroll faster. Quick, precise thinking is the order of the day here, and it’s seriously fun. There are a total of fifty campaign missions, and a whole plethora of extras to explore long after the main game’s cliff-hanger ending has been reached.

The main feature of the Quarp Jet is teleportation. Holding the square button makes a reticule appear; aiming the reticule and releasing the square button causes the Quarp Jet to teleport to that destination. The Quarp Jet can teleport past walls and laser barriers to collect out of reach survivor pods; or even warp past enemy fire. It’s a great mechanic that gives Velocity Ultra some superb puzzle elements, but the aiming can be fiddly at times. I found myself struggling to aim the reticule in tight spaces, which often led to my ship be crushed between a barrier and the ever scrolling screen. It’s by no means game breaking, but it did detract from the fun a bit, especially when I was on a flawless run.

At a certain point, telepods are unlocked, and then things get really interesting. The telepods can be dropped at any point in the stage, then by holding down L1 and selecting the desired telepod on the map, the Quarp Ship returns to that part of the stage. Telepods are limited in some stages, and the game does a great job of suggesting the optimal places to drop them; the HUD will briefly flash blue and beep, indicating cross-roads that need to be revisited later in the stage. It isn’t as hand holding as you’d think, to be honest with how frantic things get the gentle nudge from the HUD is very welcome, and adds another layer to the twitch gameplay. As the game goes on and the puzzle elements increase, the Quarp Jet really begins to become something special. 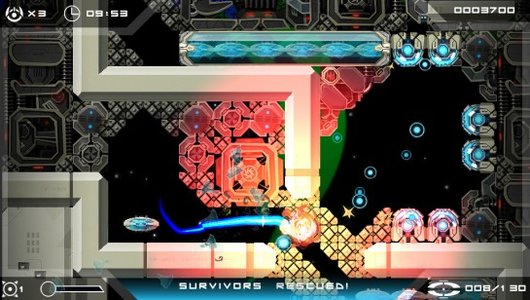 Throughout the stages there are numerous laser barriers of varying colour, hindering progress. These barriers are deactivated by shooting numbered switches in order (anywhere between 1 and 9). Hitting the switches in the wrong order will activate the fail safe, leaving the barrier up and causing the player to restart the stage if the path is blocked, or leave behind any survivors made unreachable by the barrier.

A lot of the time the switches will appear in numerical order throughout the stage, but in some cases they will be all over the place. Numerous switches for various coloured barriers can be spread throughout the stage, and this is where the telepods come in, as earlier parts of the stage will need to be revisited so another path can be taken and the corresponding switch can be hit. These stages are a complete change of pace from the others, and are among some of my favourite in the game, especially near the end. It’s in these levels where FuturLab’s eye for level design shines through, as well as show that the Quarp Jet’s teleport ability isn’t just a gimmick, but an integral part of the games design as a whole.

The stages fall into three categories; Search + Rescue, Hostile Forces, and Critical Urgency (although Search + Rescue and Hostile Forces are often combined). The category each stage falls into is displayed on the mission select screen, along with what time must be beaten in order to receive either a bronze, silver, or gold medal at the end of the stage; as well as how many survivors there are to collect in order to get the super flashy medal. 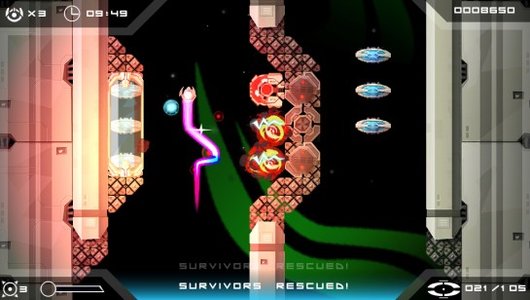 Search + Rescue are the main puzzle missions, with gameplay focussed mainly on deactivating shields and collecting as many survivor pods as possible, while avoiding fire from security turrets. Hostile Forces are the more action based stages, and much closer to the bullet-hell shooters Velocity Ultra takes its gorgeous design from; wave after wave of Zetachron ships must be destroyed and avoided, all while collecting as many survivor pods as possible. Temporary upgrades and health can be collected to help out, but they never last long enough to make the Quarp Jet feel overpowered. Finally there are the Critical Urgency missions, which see the Quarp Jet flying through a stage empty of enemies in the quickest time possible. These can get very tricky very quickly, especially when switches are involved; and the final one leaves no room for error.

The game is gorgeous, utilising a more hand crafted visual feel instead of the 16 Bit graphics of its predecessor. The vibrant colours not only making Velocity Ultra look great, but adding highlighting to switches and enemies, making them easier to notice, which is very welcome during some of the faster paced stages.

The earlier stages are prefixed by hand drawn comic panels by the awesomely talented Jack Hamilton that help move the plot along and explain the objective for the next mission. They’re a nice touch, and it’s a shame they become sparse as the game progresses, only really showing up at the beginning of a Critical Urgency mission or at the end of the game. 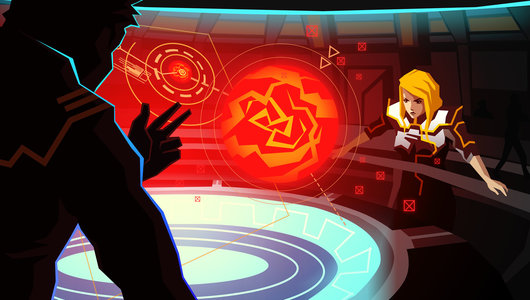 The awesome musical score by James Marsden (not the guy that plays Cyclops from the X-Men movies) and Joris de Man is another stand out element for me. Sounding like a mix of modern techno and chip tune, the soundtrack to Velocity Ultra creates just the right atmosphere for an intense sci fi experience.

Velocity Ultra was a surprise for me. The original Velocity completely passed me by, and it wasn’t until playing the demo for Velocity 2X at this year’s Eurogamer Expo that I even knew it existed. Velocity Ultra is a complete joy to play, jumping between intense fun and hair pulling difficulty, and back again. It’s absolutely relentless, but does such a fantastic job of easing the player into its mechanics everything becomes second nature in no time. It really is twitch gameplay at its finest. Let’s hope Velocity 2X can match it.