With huge console launches dropping, now seems like an utterly ridiculous time to release a game that isn’t being featured on said consoles. Regardless, Sony and Media Molecule want to defy basic sales common sense and have elected to release Tearaway on the Vita just as the PlayStation 4 and Xbox One make their long-awaited debuts. That is either a show of the utmost confidence or utter disregard for the game’s prospects – so which is it?

If I’m honest, the answer is a bit of both. No matter how good a title Tearaway is, there is simply no chance it will be able to avoid the two oncoming behemoths. Saying this, I have to give full credit to Mm though – they have given it a damn good go.

Tearaway opens with you making some basic choices. As well as choosing your hand size (big or small) and your skin tone (this will come up later), you also get the chance to choose which messenger you wish to use – Iota, the male version, and Atoi, the female one. Whichever version of the walking, non-talking envelope you decide upon, they become your guide through a world made entirely of paper.

Once the story begins, you will quickly realise that this game has quite a vast collection of characters, yet still finds enough room to include you. When a hole suddenly appears in the Sun, your face begins to peer perplexingly through it. As the messenger, you are then tasked with travelling to a nearby mountain top with the aim of reaching the Sun and delivering your message to the enigmatic You. So far, this sounds quite odd – and the best bit is, it only gets odder.

Mm have taken the Vita and have truly become inspired by it. They utilise every single facet of the device to add layer upon layer of charm, wit and sheer wonder to proceedings. For instance, using the front-facing camera on the Vita, your face is projected into the world. As you leap from platform to platform, your handsome visage will look on with a massive smile spread across it. 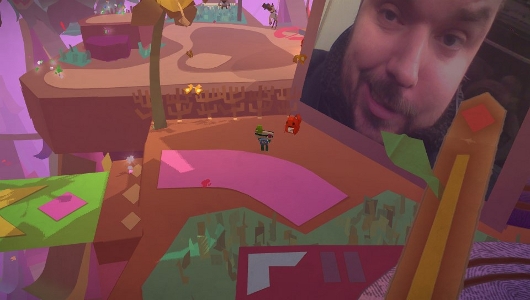 The front and rear touchscreens are also used to great effect, allowing you to easily manipulate the environment, like poking your fingers into the world to help the messenger move past puzzles or help them defeat villainous Scraps, the game’s equally mysterious enemies. The front screen can be used to move paper objects around, revealing hidden passageways and new directions to go. 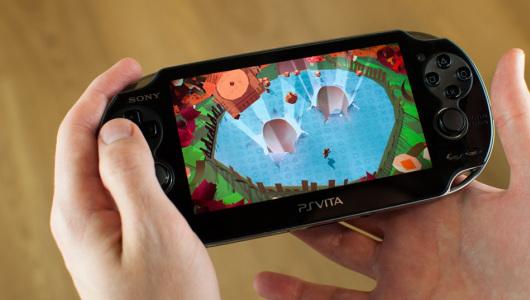 You are regularly asked to design your own aspects of the game, from flags to snowflakes to stars. As you progress, your creations continue to pop up again and again. You also get the opportunity to personalise your messenger with different facial features. All of these features, as well as the well-told story, link you to the game, making the entire experience specific to you – literally, a unique experience tailored to you (by you). 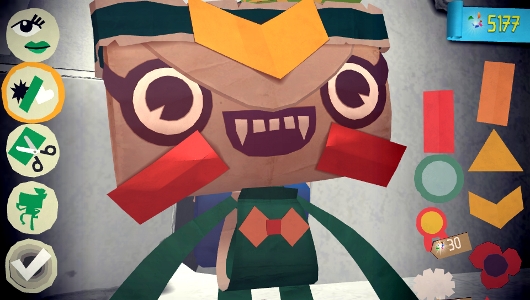 Obviously, with Mm, production values are sky-high. The world is visually stunning. The commitment to using paper craft helps to define the look and feel of the game. Like their previous titles, Mm have also excelled in the soundtrack department, with the folksy music adding to the homely atmosphere of the game. It feels like it is taking place in your living room.

While I had a lot of fun playing the game, I have to raise one minor annoyance. The game uses a fixed camera for most of the game. While normally, this didn’t cause an issue, moving across narrow pathways with a horizontal view meant I couldn’t judge the depth of the platform. It only happened a handful of times, but every time I fell off, I cursed this one issue in a game brimming with better ideas.

While we may all get swept up in the next-gen hullabaloo, it would be remiss of fans to dismiss this title as a dud. There has been a lot of thought, work and what genuinely feels like love poured into this game and if you let it, Tearaway may just surprise you.