Games of the Generation: Journey

Being a fan of video games in general, it is rare that I go into a new title without some rudimentary awareness of it. In the case of Journey, I had very little to go on – besides some screenshots and comments here and there from gaming pundits espousing its many qualities. The sum total of my knowledge on the title was that it was thatgamecompany’s next project, it was exclusive to the PlayStation 3 and it included some form of multiplayer.

Being a fan of Flower but unfamiliar with Flow, I was cautiously optimistic as the launch approached. As a PlayStation Plus subscriber, I was also aware that I would get the game a week earlier. I can still remember downloading the game on a Friday evening after work. I was quite tired and was contemplating just giving it the night before trying it out but my stubborn nature won out and instead, I soldiered on. 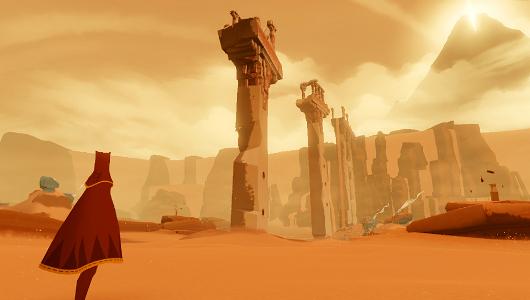 Taking control of a red-robed avatar, I began exploring the nearby sand dunes, randomly pressing buttons to learn what they did. The game is utterly beautiful. I could have quite happily looked around some more but out of the blue (or rather the brown) I noticed another figure off in the distance. Ignoring the plight of curious cats, I ventured out to investigate.

As I approached, he/she chirped. Knowing the button to chirp back, I did. While I would like to say we developed an intricate communication system, what followed were two people exploring the environment and one starting to chirp wildly when he/she encountered something. Progression was relatively straight forward – off in the distance, there was a mountain with an odd, ethereal glow emanating from it. Moving towards it seemed like the thing to do, but like almost everything in Journey, you are never explicitly told that this is correct. 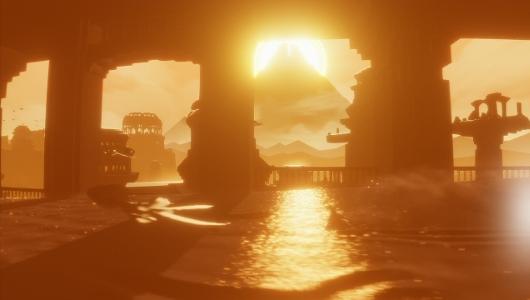 Reaching the first checkpoint, I took stock of the last 30 minutes. I realised the genius of the game’s mechanics. By removing the ability to speak or to grief the other player, the entirety of my interactions with this other player could only be brought forth using the chirp button. This meant we could only communicate the most basic thoughts through such a system, like ‘over here’ or ‘that was fun’, depending on the situation. We were also rewarded when we tried to help each other – for instance, jumping, a fairly innocuous ability when on my own, became far more useful and enjoyable when performed next to my ally. Both of us could jump higher and farther when in close proximity. All of these systems, while never forceful, still streamlined our behaviour within the game, to the point where it just seemed pointless to do anything other than help each other.

Each new area led to new sights and sounds to explore. I still remember wandering over to a stone structure with some unintelligible writing on the surface. Turning around, I couldn’t see my companion and the wave of panic that overwhelmed me is something I will never forget. Having no way to shout except a now weak-sounding chirp, I looked around for ten minutes before finally finding my ally. I began to chirp wildly at him, as if saying ‘NEVER do that again!’ 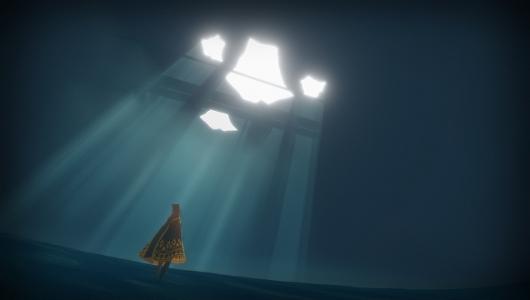 I won’t spoil what happened as the end of the game approached, suffice it to say, it was incredible to think that this relationship had been built over a relatively short trek to a mountain. By the time the end game arrived, I felt as though I had been put through the wringer but the catharsis was worth it. I finished playing some time after midnight on Saturday and since then I have not replayed the game. That one journey was enough for the game to cement its place as one of my favourite experiences of the last generation.

There are rumours that a version is in the works for the PlayStation 4. If you have not played this game, I strongly urge you to.