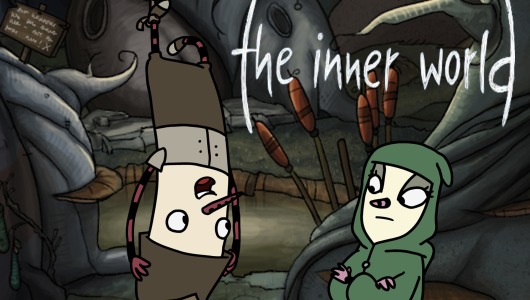 The Inner World is a game that oozes charm from the outset, with traditional point-and-click adventuring at its core, as well as a team that have invested a great deal of attention and love through the game’s artwork and characters.

The developer’s work in this game is what is so impressive. The story is fairly juvenile, with the opening scene displaying this – the cinematic introducing Robert, an Asposian oddity with an unusual flute nose, reflects the good-natured innocence of children’s cartoons. Robert is an unconfident character, an unlikely protagonist and yet is thoroughly loveable. He lives a cocooned life in a cocooned world; Asposia is an intriguing, hollow space surrounded by dirt on every side. Its secrets and peculiarities are known only to Asposia’s ruler and Robert’s father figure, Conroy – and soon, Robert himself, after he is thrown head first into an unintentional adventure. Quite literally head first; down a garbage shoot, in pursuit of a pigeon-thief. The Inner World has its moments of  overwhelming silliness, and the game’s charm is something to revel in. Robert’s sudden adventure occurs after the arrival of the Basylians, vengeful wind gods who are to blame for Asposia’s wind fountains, its source of power, being extinguished.

The game’s warmth and whimsy seems impossible to not appreciate. The interactions are quirky from the start – it feels impossible not to laugh whilst getting a worm intoxicated enough to kidnap it for pigeon food. There is such an appeal to what could be a dormant silliness in older players, encouraging you to indulge in it long enough to while away several hours in this delightful story. 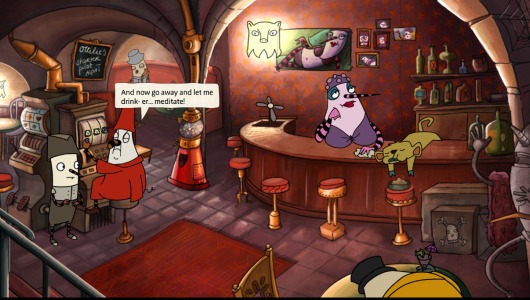 Voice-acting is always significant in games, particularly ones that involve heavy interaction between character and audience. Here, the voice-acting can be somewhat hit-and-miss. A highlight can be found when exploring the Root Forest, upon meeting a venomous loaf of an amphibian called a Gorf; not only is it fantastically odd-looking in its green rotundness, but its heavy northern accent adds to this warm frivolity. Sadly, the voice-acting is not consistent; other characters, such as the later introduced, wonderfully-named ‘Gorfelina’, is un-impressively voiced with untimely pacing, sounding more like a reading off a page. Despite this, the range of accents and styles of speaking made each character wonderfully unique, even minor characters such as the mother that pesters you to bring her child a onesie, or the shady garbage dealer with his mafia-esque voice. The people of Asposia are a mixed bunch of oddities and unpredictability’s, making Robert’s encounters more promisingly fun.

The dialogue also largely makes up for the bouts of novice voice-acting. The writing has many moments of hilarity that make The Inner World worth playing. The stubborn sarcasm of Laura, the innocent naivety of Robert and the weirdly flirtatious comments from Gorf and Gorfelina alike adds much more depth to a game that has an enjoyable, but quite light, storyline. 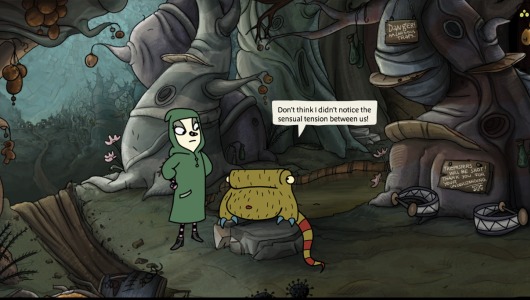 One element of The Inner World than cannot go unmentioned is the artwork. Here is a 2D game composed entirely by hand drawings. Whilst as a reasonably short game, coming in at approximately eight hours, each environment is immediately well-drawn and atmospheric when combined with the instrumental background music. The Root Forest is a good example; whilst Robert and Laura’s immediate concerns at this point rest in the foreground, such as deactivating the numerous bear traps on the forest path, in the distance the woodland appears infinite. The artwork involves a density of trees and winding dirt paths, giving a sense of the imagination involved in putting these locations together. The attention and purpose put into making these environments come to life is wonderful, and clear to see; the result being that anyone who plays The Inner World feels a real respect and appreciation for the work involved.

The in-game help is similarly very well-done. It works as a guide, intended to nudge you towards the next step, yet avoids stating the obvious unless you wish to know. The hint screen is sectioned by separate objectives, and works by initially revealing vague suggestions of where or who to go to next, ultimately leaving it up to your jurisdiction of how many clues you desire. This allows the game to be dependent on the player and their experience with puzzle games – rather than having clues enabled or disabled, you can choose how much assistance you feel you need, whilst still maintaining the sense of reward in solving puzzles yourself.

The puzzles themselves are a reminder of why point-and-click adventures are so fun. Correctly combining objects in your inventory feels rewarding, despite not fully knowing what your coffee/paint varnish hybrid is intended for. The ease of puzzle-solving within the story is very smooth; the days of coming to a stand-still as a result of forgetting to pick up that long-forgotten object levels ago that is now vitally important to your progression are long gone, and the game moves forward logically. The indication of a solved puzzle via a story cutscene still feels hugely satisfying, and The Inner World renews this simple affection for traditional point-and-click games a great deal.

The only real issues I discovered were technical ones – yet, unfortunately a real hindrance to the story progression and immersion. Firstly, the voice-acting, whilst a real gem in terms of making each character an individual, occasionally cut out, causing blanks in conversations. This isn’t a huge problem due to the option for enabling speech bubbles, which does add a pleasant aesthetic by itself; however, it can be a distraction from the dialogue. This was quite a disappointment, purely because the combination of wit and playfulness found in the writing and the originality of much of the voice-acting is what makes The Inner World such a touching game.

Presenting an unlikely and endearing hero, a collection of extremely loveable characters and quite a light, yet heartfelt story of his quest to restore tranquility to Asposia, Studio Fizbin has very clearly put a great deal of love into this game, something that players will not be able to ignore.