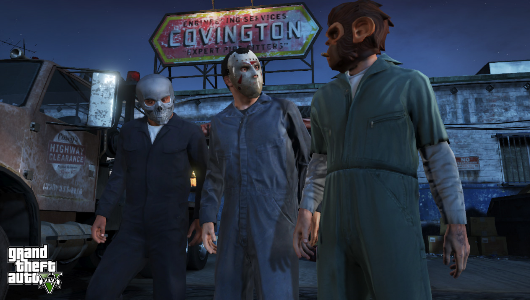 The long-awaited return to San Andreas sees one of the biggest shake-ups to the Grand Theft Auto series in the form of three playable, and completely different characters, interlinked by common goals and enemies. With the biggest map of any Rockstar game, an emphasis on executing heists and the largest selection of vehicles available, this is one Grand Theft Auto that definitely lives up to its name.

The game’s opening is definitely a huge step up from the introductory-style tutorial from GTA IV. Rather than spend 10 missions driving around your fat cousin, you’re thrown in at the deep end, and your first experience of GTA V takes place mid-heist with two of the game’s playable characters – Michael and Trevor – along with their partner Brad, robbing a bank. Without going into details, the heist goes wrong when the trio are overwhelmed by police forces, and after an ominous scene at a graveyard, we’re taken forward 10 years. Michael’s retired from the game and living the good life in Vinewood Hills, Trevor is pushing his own take on corporate greed, and we’re introduced to Franklin, a young two-bit gangbanger from the streets, looking to start earning a better payoff than repossessing cars by illegitimate means. 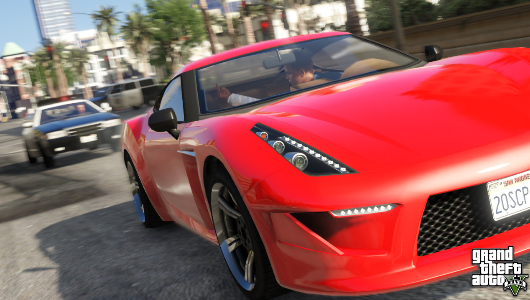 Being unarmed in a vehicle can still be pretty offensive.

By having these three personalities, GTA V allows us to play as characters that generate a more entertaining experience, whether that be in the set missions and cinematics, or just from the random events within the game world. While they may have more motivations and personality traits than Niko Bellic, it also becomes clear pretty quickly, that none of the three would be able to hold an entire GTA story together alone due to their flaws. Trevor, while the most hilarious character and an early fan favourite, is nothing short of a homicidal psychopath. This is great fun in short bursts, but if it weren’t for the constant switching of characters required, and the fact that Trevor only becomes available in the main story after the first big heist, he would become tiresome.

A lot of the game’s story is focused around Michael, Trevor’s old partner and Franklin’s initially reluctant mentor. He is a family man and has some ties to the in-game equivalent of the FBI – the imaginatively named, FIB. Michael’s also a little troubled though, as we soon find out after the opening credits with him finishing up a session with his shrink. But despite having the most diverse history and background, he comes across as, overall, a bit of a boring character to play with. 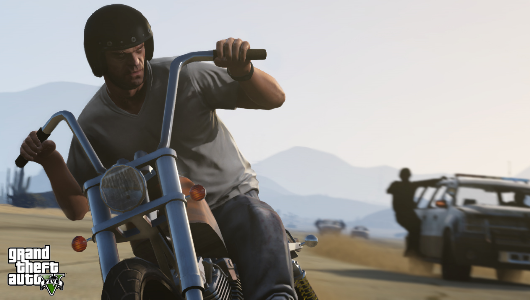 Trevor’s aggressive, dangerous, a loose cannon… and great fun to play as in short bursts.

Franklin, on the other hand, is very reminiscent of CJ from the original journey to San Andreas. A young African American from the mean streets of Los Santos that wants to earn a better buck, but caught up by his current associates in what is essentially low-paying gang-related jobs. One of these associates really ruins Franklin as a likable character for me though. Between Franklin and Lamar, the N-Bomb is dropped at least once every sentence, which did make me uncomfortable playing the game, even though this is down to Rockstar North making a parody of America based on film and TV.

What GTA V spoils in its characters, it definitely makes up for in the game world. The areas of Los Santos and Blaine County create the largest sandbox Rockstar have ever released in a game – and could contain the original maps from GTA: San Andreas, GTA IV and Red Dead Redemption. While that does make the map exceedingly huge, the use of vehicles means that getting from one end to the other isn’t a completely daunting task. At times, this can make the world feel smaller than it should, but taking a short trek off the beaten path will quickly reveal the level of detail that has gone into this iteration of San Andreas. Whether it’s the roaming wild life, the hidden cult operations or the glorious underwater scenes, there’s always something to discover in stunningly beautiful detail. 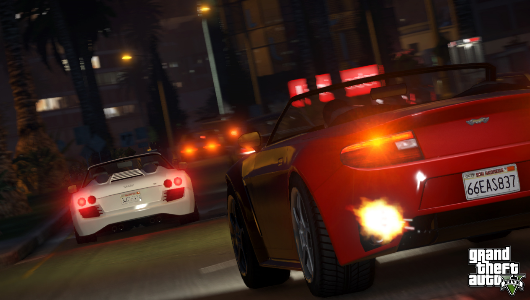 Races can happen anytime, in almost any vehicle online.

And you’ll experience a lot of this scenery while taking part in the multitude of missions, side quests and activities that GTA V has to offer. The single player campaign alone offers a good 20 hours of gameplay with varied missions and extensive heists that can be made up of multiple smaller missions before the big finale. What GTA V also offers is  a number of character-specific side missions called “Strangers and Freaks” which can introduce you to some recurring characters. They will offer new missions that bring in some of the side activities as well. And then there’s the random encounters, when in-game events like muggings, people needing a ride and security vans to break into pop up on your radar for you to engage with, or completely leave alone.

If you couple that together with the activities in-game, you’re looking at the most replayable GTA ever, as it adds a true end game to your time in Los Santos. Buying property makes a return from San Andreas, and also includes its own missions, but some of these may be best left till after the final mission as they can be quite pricey. A trait that follows on into the multiplayer portion of the game, dubbed Grand Theft Auto: Online.

Like GTA IV, the online mode can be accessed quickly from in-game menus, but can also be switched to during the initial loading of the game, and throws you into online versions of Los Santos and Blaine County. As it ties into the canon of GTA V, you’ll meet characters from the single player, first of which being Lamar, who serves as your initial tutorial partner and introduction to the various ways to do jobs online. It was this portion of GTA Online that caused havoc with the servers during the first week of launch, and led to a lot of gamers being left in lobbies for a long time before deciding to switch off and go back to single player. 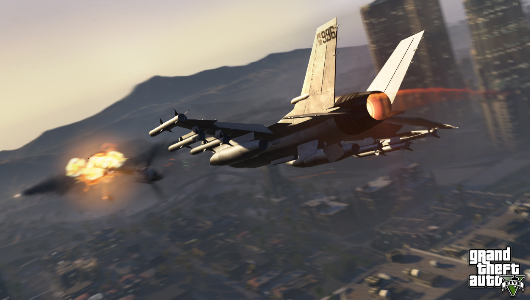 Take to the skies in a number of planes and helicopters, or just shoot them down for sport.

Fortunately, most of the initial issues with GTA Online have been fixed at this time, so we can start to get a true feel for how the game should be played online. Within the game world, you can take an available car from the streets and turn it into your personal vehicle by sticking a tracker and some insurance on it. This allows you to not only find your car anywhere in the world, but also get a replacement should yours be destroyed. Along with owning a car, you can buy garages and real estate for your character to enter that gives you not only a place to store your cars or a social hangout for your friends and crew, but also a safe area from other players, who’ll ultimately want to kill you and ruin your good time.

Though player interaction online can’t be held against the game by any means, I applaud Rockstar’s choice to add a choice to play in passive mode for a small in-game fee. And this is really what stands out about Grand Theft Auto V, it’s all about the little details. Whether it be putting your high beams on and dropping the roof on your convertible, or using a whistle to lure out prey while hunting. It doesn’t end with those examples of course, but it’s really something you need to experience to fully appreciate, even if they are sometimes forgotten about with the fast cars and extensive choice of weapons. 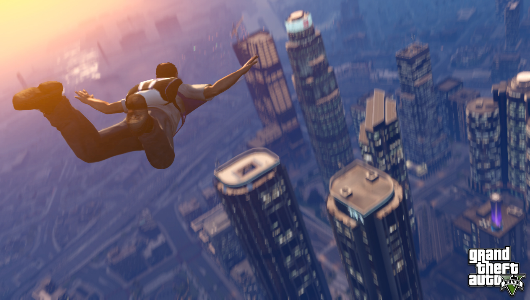 You’ll ‘fall’ in love with the game world.

Vehicle handling and performance, weapons and even flying have all had a slight overhaul to make them not only a bit more realistic, but also comfortable to play with. Vehicles feel a lot more weighty without making them impossible to handle, which can be improved upon further by boosting your character’s driving skill. Not only that, but wheels now react to damage in more than just a cosmetic fashion. Even the most sturdy of cars can be rendered useless by a good grunty hit to any wheel, either locking it up or taking it off completely in the crash. While this physical effect has been greatly reduced for online, it makes evading the cops and chasing down targets in single player a much more nerve wrecking task, as a single hit can ruin your mission. Aerial vehicles also see a bit more realism and updates to their damage effects. While flying in GTA IV can feel safe at all times, cross winds in GTA V can have even the most experienced pilot swaying to and fro.

Vast, vibrant and detailed game world.
Fantastic gameplay across the board
One of the most diverse online games.
Slightly lacklustre single player.
Install issues, resulting in texture-popping.
A rocky launch to GTA Online.

With all that GTA V has added to the series, it’s a shame that it has been let down slightly by the single player. But with all of the side activities and the expansive multiplayer, there’s a wealth of replay value included in the game box. The attention to detail, the vast and vibrant game world and the absolutely stunning scenery make this a must-have. The next generation of consoles might be around the corner, but despite the install issues of GTA V, Rockstar have given us one of the last truly great games of the current gen.