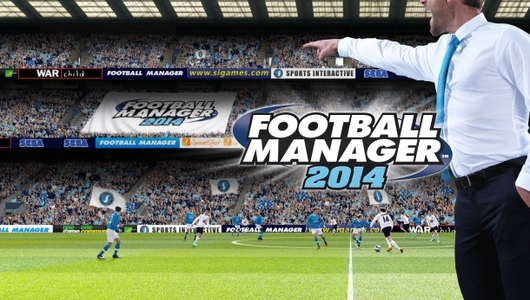 Fergie is gone, Mourinho is back, and the Premier League looks more open than it has since its inception. Amidst all this chaos, in walks someone new. A manager with such talent, such promise, such ability, that he can literally walk into any managerial position in the world. Moyes just arrived at Man Utd? Too bad, because they found someone better. Pelligrini looking to make Manchester blue again? This guy will make it bluer. The Special One back home? Well he just got kicked out. Nobody is safe, no club can resist him. Are you ready? This is Football Manager 2014.

If you’ve played a Football Manager game before then you know exactly what to expect here, because this is more of the same. FM has a reputation for being so in-depth and feeling so realistic that it has inspired some would-be virtual managers to apply for real world positions and in some crazy cases, have even been accepted. If you don’t believe me then read this. FM 2014 is now available on Linux for the first time and on top of this, there has also been changes made to make transfers more realistic, a tactical overhaul and enhanced UI among other things. Of course, because this is football, and as we all know anything can happen in football, you should never expect to win every match no matter how good you are. There will always be upsets, and low points, such is the nature of the beautiful game. 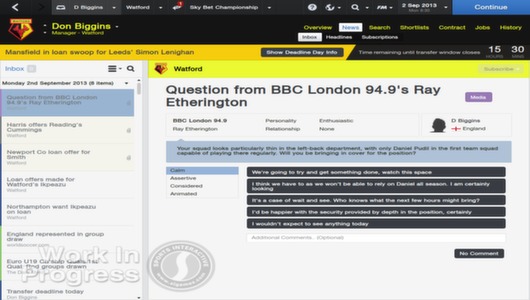 As in previous editions, Football Manager has two main modes. The fully featured Career mode and the Classic mode. This provides the best of both worlds as the fully featured Career mode provides the kind of in-depth micro-management that the series is famous for and the Classic mode streamlines things for those of us that don’t have the time, patience or just the knowledge of how to run a football club. The sheer volume of options and things to do in the career mode is both its biggest asset and for many, may be its biggest downfall. For the more experienced among us, this will all be old-hat to them but for someone like me who hasn’t played a FM game since 2011 or someone who is new to the series, then the amount of things to do can be overwhelming. Add to this an unhelpfully cluttered user interface that can make it very hard to find what you’re looking for and you have, potentially, the recipe for disaster.

However even these negatives, big as they may seem, cannot completely ruin what is otherwise a very well-made game. As I said above, there is huge depth to this game and if you manage to get past that initial explosion of information your eyeballs will have to take in, then you will slowly start to understand the menus and get a better grasp of what is going on. After spending some time in the hot-seat, it’s easy to see why people feel they can manage real clubs after playing one of these games. Over the course of playing this game, you will be having boardroom discussions, conversations with players, making transfers, doing post match interviews, and negotiating contracts, among a thousand other things that are required to run a club. 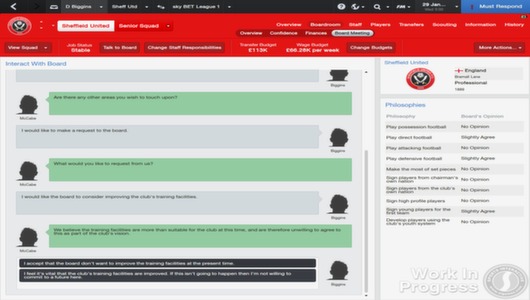 I pick the second option.

Thankfully, most of this information gets dropped straight into your inbox where it can all be dealt with relatively easily. Messages are also colour-coded to make sorting them easier to deal with, though most people will probably just scroll through them one at a time like I did. You can move through the game without ever really having to leave your inbox except for matches and conferences, both news and board. The problem with this is you feel as if you’re missing nine tenths of the game this way. It wasn’t until maybe four hours in that I felt comfortable enough to leave the safe confines of my inbox and venture out into the lonely world of menus that inhabit the Football Manager world, and this is where the game really starts to come alive.

You can change basically anything you can think of. Set tactics to practice in training, have individual players doing certain training routines, adjust transfer and wage budgets, talk to your staff, delegate certain tasks like post match press conferences to your assistant, and organise your scouts, these are just a very small sampling of the activities available to you once you feel capable enough to dive in. If you let it, this is a game that will suck you right in to the point where you are emotionally invested in what happens. I personally got pretty damn annoyed while trying to sign Leighton Baines from Everton. I felt I was making a more than reasonable offer of about £17M plus add-ons, only for them to reject it. I then came back with another more than reasonable offer of about £20M, at this point Everton came back with a counter-offer designed purely – I can only assume – to spite me. They wanted £64M plus another £4M in add-ons. Needless to say, I rejected it. 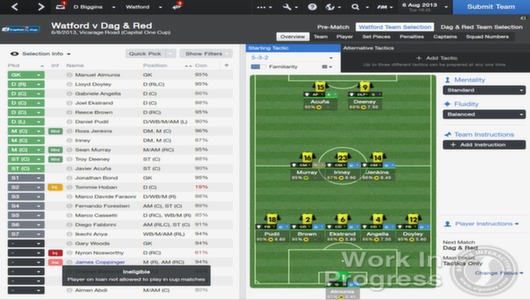 Five at the back? Scared I reckon.

The match days are just as intricate and real as the rest of the game. Before the match starts, you do the obvious things like pick your team and formation etc. But adding to this is the more in-depth tactics you have access to. For instance, if you’re playing five across the midfield you might want to tell your players to play a possession game, if you think your opponent is going to play three across the back you might want to play two attacking wingers and tell them to look for the overlap from the full backs while telling the rest of the team to exploit the flanks as much as possible. Once the match kicks off you have several options, you can watch the game in full 3D or in a 2D birds-eye view, you can choose to only watch highlights as well as adjusting the speed of the game, and of course you have access to your team for subs, tactics and other things. While the game progresses you get occasional suggestions from your second-in-command. If you are getting overrun in midfield, he might suggest you bring on a midfielder, or he might recommend you take a player off who is looking tired. These suggestions are a big help as you might miss some of the things he mentions. 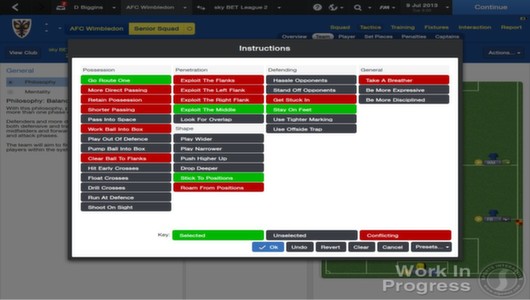 If all this sounds like too much though then fear not – for Classic mode may be just what you’re looking for. It strips everything down to a basic level and just lets you run with it. The UI is much simpler here than the full version and this makes a huge improvement. The menus are also much less intimidating to newcomers. There is less of the tedium that more casual players may not want to deal with such as board discussions, welcoming new players to the club etc.  Match days too have been simplified with you no longer having to worry about things like team-talks. You are also given a pre-selected team to use before the match, so if you’re not so good with knowing which players are best this could be a big help. You are still playing the same basic game just stripped down and streamlined for easier and faster play.

I wanted to put an el Classico joke in there but couldn’t think of one.

Much like FIFA, this is a series that improves by increments every year. Never changing too much, too fast, but always improving – this is a worthy addition to the franchise. However, for people who expect more of a change, they may be disappointed because despite some obvious improvements, this still feels like the same basic game I played in 2011. This may be good or bad depending on how you look at it. Worth noting also is that this game will run on almost any computer or laptop. I have a crappy single core laptop at the minute (my good one broke a while back and I haven’t got a new one) with a graphics card that can barely work on flash games, and I could run this game with almost no issues despite the game giving me a half star performance rating.