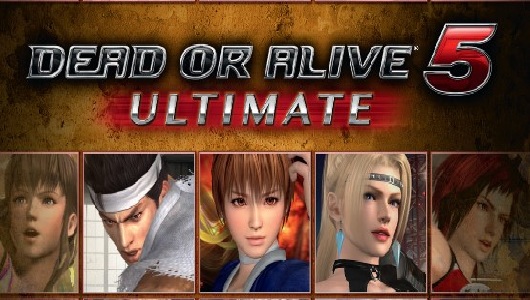 In this day and age it is hard to fathom why fighting games continue to release upgraded iterations via retail disc instead of using DLC and patches to get the same result. In saying that, Dead Or Alive 5 Ultimate still manages to improve by adding new characters to choose, new modes such as tutorials and combo challenge – a mode for practising combos – new gameplay features such as the Power Launcher and adds two-on-two tag fighting to online multiplayer.

As Tim already reviewed the original version of DOA5 when it released I’m not going to talk about the core game mechanics or story etc. If you want to see what the game as a whole is like, you can read Tim’s review of DOA5. Instead I’m going to talk about the new additions and how they impact the game overall. First up is the addition of five new fighters. Momiji and Rachel are two new characters from the Ninja Gaiden series, Leon and Ein are returning characters from older DOA games, and finally Jacky Bryant is a new guest character from the Virtua Fighter series. Along with these new characters there have also been bug fixes and other tweaks. 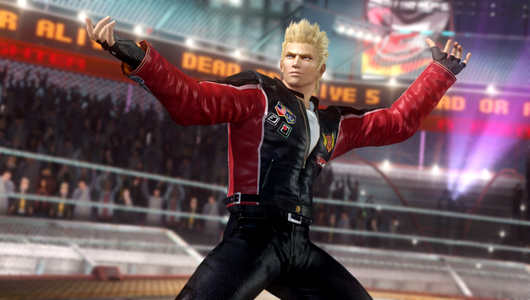 Jacky is a new character from Virtua Fighter

Next up we have the addition of tutorials and the combo challenge. These are a fantastic addition to the game and are especially useful for people new to the DOA series such as myself. The tutorial provided a great introduction to the basics of the game, without which I would have been struggling to learn how to play, be it in the story or in online multiplayer, and that isn’t always the most fun or ideal way to learn. It started with the basics, such as how to move, what buttons are linked to what moves and steadily got more complicated until you are introduced to more or less all there is to learn. Although as with any fighting game, by learning how to play your barely even scratching the surface of becoming a good player.

The combo challenge is a great step up from the tutorial for new players as well as a good refresher for experienced players. In this mode you are shown a button combo on screen and you have to perform the move to advance to the next one. This is a great way to learn the combo’s of your favourite characters and without it I would have been left button bashing in proper fights in an effort to do anything other than a straight kick or punch to my opponents. I felt that without this mode to practice I would have struggled to adapt to DOA‘s particular style as it feels vastly different from my usual fighting games like Tekken and Street Fighter and so I  am glad they decided to add it to the game. 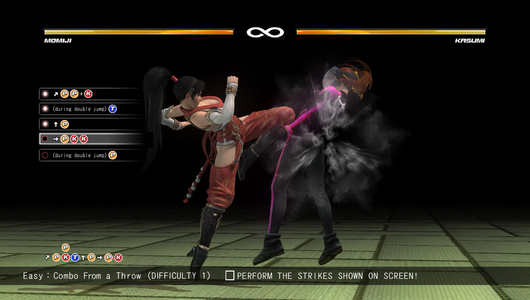 Complete the combos on-screen to advance.

There is a new move called the Power Launcher which – similar to the Power Blow of DOA5 – can only be used when the player’s character’s health falls below 50%. This move launches opposing players into the air allowing better players to begin a combo and keep their opponent juggled for huge damage. On top of this, returning characters have been given new combos which can make the Power Launcher even more effective. As well as these gameplay tweaks, some major changes have been made to the tag team gameplay in the form of a limitation to the amount of health that can be recovered by a tagged out player and a new move called Force Out which knocks a character out of the ring and forces the opponent to use their other fighter alone for a limited time. There are also several new tag poses – if the correct character pairs are chosen – and new tag throws as well. 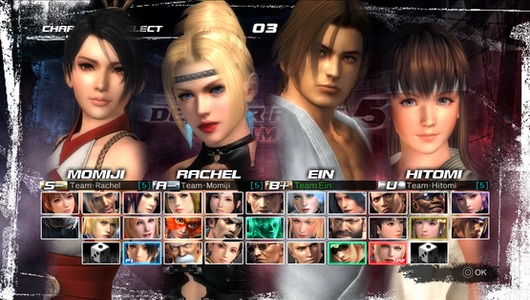 Lots of possible tag-teams to choose.

Just like in Dead Or Alive 5 Plus for the Vita, players can choose their own custom music for use in the fights. While not allowing players to use their own tunes from their hard drives, their is a good sized list to choose from in game, including themes from previous DOA games. There are also many new costumes for each character, as well as several of the DLC costume packs being added as unlockables in the game itself. All costume packs that were purchased with the original DOA 5 can be used in Ultimate with no additional charge. This adds up to a total of 231 costumes, up from the 114 that were available in the original.

Tutorial and combo challenge are a fantastic addition.
Still plays just as good as the original.
Could have been released as DLC.

If you have already purchased the original Dead Or Alive 5 then your probably better off hanging on to your money as this is essentially the same game just with some new bells and whistles. Of course if you’re a hardcore DOA fan who wants all the characters, costumes and new stuff you can get, then this is absolutely for you. On the other hand if you never purchased the original and are thinking of taking the plunge on this particular fighting series, then this is definitely the game for you. Along with the original – which, according to Tim, was a pretty darn good game – your getting all the new stuff: new characters, costumes, moves and more along with a number of bugs being fixed.