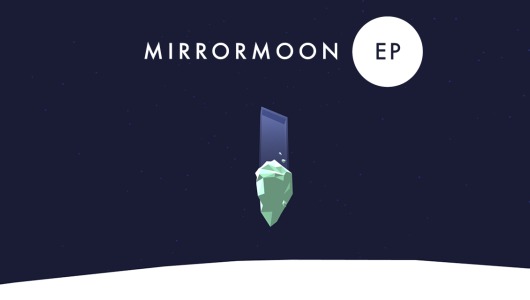 Space exploration never sounds dull, and Mirror Moon EP appeals to lovers of the unknown everywhere. Whilst having elements that seem somewhat under construction, the game’s premise of cooperatively discovering new star systems with other players is refreshing and addictive, alongside gorgeously minimalist graphics that enhance the simple yet striking appeal of the game; to explore.

You begin as a stranded traveler on a red moon, armed with a device that allows you to beam rays of light and move objects – depending on whether you find the right tools. Floating above your vantage point is a mirror moon, one that you can rotate and study for noticeable landmarks that may provide a hint as to what you’re to do next. Your laser beam allows you to mark this mirror moon, allowing for less guesswork and random wandering.

The ability to move objects, namely this mirror moon, quickly becomes useful as it allows you to alternate between day and night. This reveals certain parts of the moon that were previously unseen, and changes up the environment whilst you seek to solve unclear puzzles. The controls that enable you to move objects, walk and use your beam ray are easy to grasp, following the peaceful simplicity of this exploration game – a simplicity that is perhaps too much so. Aside from the on-screen text that greets you at the start and end of the first planet level, which includes some very vague references to an anomaly and something called the Boatswain – you’re left somewhat out of the loop. Mirror Moon EP is a game that is left to the player to get hold of and grasp, making exploration almost necessary if you are to better understand and fully experience it’s brilliance. 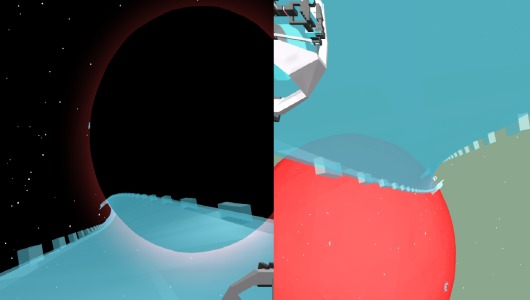 Sadly, not many of the puzzles are this abstract.

Mirror Moon EP‘s lack of explanation has its pros and cons. The delightfully tricky navigation menu takes a while to get used to – lots of switches and buttons! It’s a very fresh, fun way to continue a game as it involves some challenge from the start, allowing you to take on that explorative role in your shuttle, fiddling with the map and plotting a course across space. Seeming initially very simple, the sheer number of approachable planets is vast, which is exciting but also a little aggravating. It takes a while to land on the planet that seems the next viable step in the character’s story – you’ll know this when your landing begins with another on screen thought bubble from the protagonist. This isn’t necessarily a bad thing – it suits the game, in that exploration is absolutely key and in reality, there’s often no way of knowing if you’re travelling to the right destination until you actually arrive. However, it can become somewhat frustrating, especially as it can take several minutes to travel between systems. Mirror Moon EP is not a game for impatient people. It’s also not a game for those that wish to understand and have every aspect of it explained, as this still does not seem possible. In a way, the mystery of the ‘anomaly’ that seems to make up the game’s story takes a backseat to what is most worth experiencing – simple, unguided exploration. Mirror Moon EP is split up into Seasons, with each season relying on a co-operative effort to complete ‘Side B’ of the game by discovering 100% of planets available. Doing so unlocks the next Season, with a new host of star systems to explore – and back to square one!

The sense of achievement that arises from discovering a planet with a ‘/’ in its name is surprisingly large; it means it’s undiscovered, it’s secrets now belong to you. Once it’s puzzle is completed, you have the chance to name this planet anything you would like, resulting in a title of your own invention floating around the cosmos among other player’s imaginings. This is what confirmed the game for me. Rather than meandering around, unsure of the game’s vagueness, targeting new star systems and placing them under my discovery feels satisfying and rewarding. 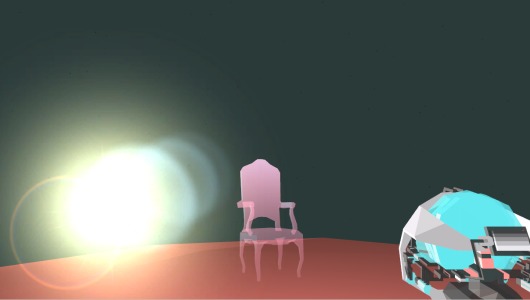 A solitary, seemingly useless, chair. Fancy a sit down?

This sense of control within the game does become stronger, and can turn your opinion of it from seeming like a meaningless wander through space to something more profound. It’s now your job to forge a path across the stars, finding these new locations and new challenges. There are logical decisions to make that do make the game more intellectually challenging; figuring out the function’s of the navigation panel, for one. You decide how much fuel to spend on your next journey, which impacts the travel time significantly; I had a 24 minute wait to my next destination, which may seem extreme, but nothing you can endure by surfing the internet whilst the game runs in the background. This may present the game as something of a drag, but it’s up to you to decide whether you want to use your resources sparingly or not. Besides that, Mirror Moon EP is not a game to be rushed anyway – it’s peacefully measured.  What more than makes up for this is the sights, despite the very minimalistic graphics. Something as simple as the way the sun’s light filters past the mirrored image of your current planet, and the striking vibrancy of a new colour decorating it’s surface is nothing short of stunning.

Without taking note of certain special moments of this game, it’s quite easy to see how it could seem…somewhat mundane. It has no clear sense of direction, and like many procedurally generated games, what seems important is the drive of the player in wishing to plot their own course. The pace of the game can seem quite stuttering initially, when you’re unsure of what to actually do; hints and references to the ‘anomaly’ the character mentions at the start do appear at various stages, but this does not drive the game, despite the superiority of the first moon’s puzzle to latter ones on new, random planets. In fact, many of the ‘puzzles’ to solve in order to find the glowing white orb that will confirm that planet has been completed are very simple, some being little more than locating two buildings on the surface. However, it’s important to remember that as a new game, one that’s procedurally generated, it’s still under construction. The basis of Mirror Moon EP is wonderful despite its novelty.

The travel time, as previously mentioned, can be long. Longer than expected. It takes a while to even grasp what your motivations in the game are supposed to be. But this almost suits the sense of timelessness that Mirror Moon EP presents; there is no real urgency. It’s not about completion, it’s about experiencing a sense of wonder and involvement in something that in reality, we know little of.