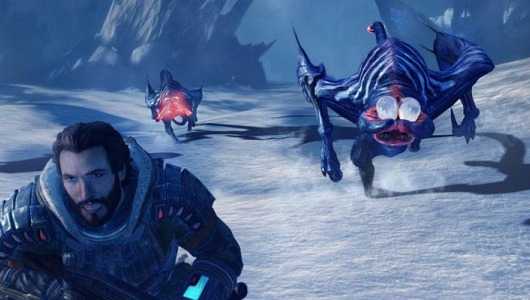 Before this review I had gotten some hands on time with Lost Planet 3 when Big Red Barrel was invited to attend a hands-on event, which offered both single player and multiplayer runs. I enjoyed what I saw and it’s good to know that since then, Capcom have only improved their Lost Planet franchise.

Lost Planet 3 is unlike its predecessors in a way that’s hard to describe. Suffice it to say, you do not need to have played the previous entries in order to enjoy and get what’s going on in this game, especially as it’s a prequel story. Other than that, I found the game to be  much more accessible and enjoyable than previous titles. 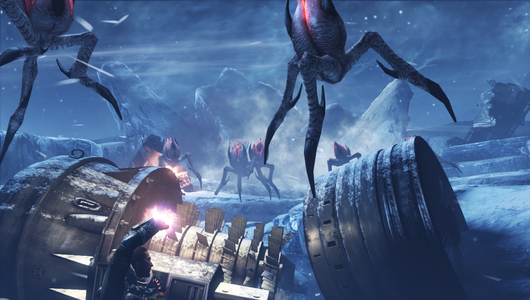 The character you play, Jim, is likeable and there are periods throughout the game where his wife will call him and they will have seemingly ordinary and mundane conversations. These chats somehow manage to be touching and comforting, as you roam about the barren ice wilderness.

You are given a pistol from the get-go, which has unlimited ammo. It’s quite effective, at least against the early enemies you face, with aiming and triggering being smooth and quick to operate. A shotgun is available later on in the campaign as you reach HQ and purchase from the store. Though there aren’t too many available, you can take on side quests where you get payment in the form of T-Energy. You can go back to HQ to upgrade and purchase weapons and inventory, which offers more variety as you progress throughout the game. Enemies vary from little repetitious persistent bugs to giant spider-like monstrosities.

The mech rigs you operate in this game are a lot of fun and quite beastly too, aiding you not only in comfortable movement, but bashing obstructions out of your way – the large drill in particular making me feel like I was a giant Big Daddy. I will say that your viewpoint from inside the mechs can make it awkward to see enemies properly, so sometimes you’re just flailing hoping to hit them – but it’s not too ridiculous. 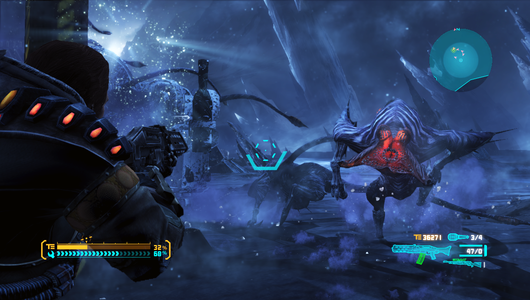 Game-play also consists of quick-time events and mini-games. You might have to repair something (as you are an engineer), by doing that old Batman: Arkham City/007: Legends trick of tuning frequencies by rotating your analog sticks to sync up. I’m sorry, I just realised I spoke about 007:Legends – I shouldn’t besmirch this article and this cool game (get it?) by mentioning that.

Even though it’s a more story-focused edition to the series and the contents of the story itself are’t that exciting or unique, the elements of interest and engagement come entirely from the characters and the acting. To flesh out the world around you, audio and text logs can be collected throughout various locations which add depth to the experience. 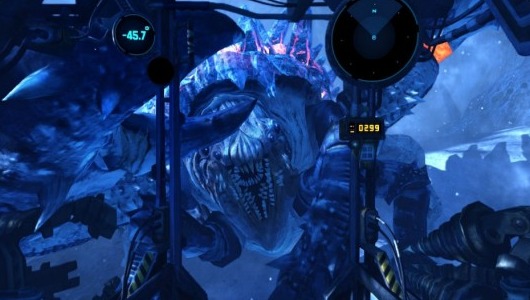 Multiplayer doesn’t veer far from the standard elements in the single player campaign. Your character can be upgraded, without being glued to one class or ability range. Deathmatch is pretty normal, though Lost Planet 3 offers a change up in the options you may find in other multiplayer games. Capture the Flag has you fight another team and a large monster, but you have the option of momentarily joining forces with the other team to take it out. Multiplayer is quite fun and fluid – the grappling hook that you’re given is a useful and enjoyable means of traversing the environment and getting the drop on opposing forces. 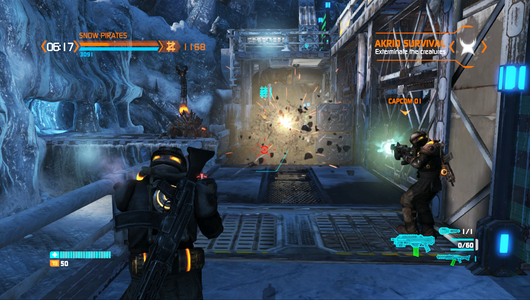 Visuals are crisp and impressive, but nothing awe-inspiring. Everything is blue. However, facial animations react in a manner that actually conveys the emotions that run alongside what we hear from the characters – though now and again, lip movement was quite stiff. The voice acting adds a lot of charm to the already interesting dialogue, which is always a great bonus in a game as having voice actors who just don’t seem that interested in the project can hamper scenes and vibes. Gale, the mechanic you meet at the base, is likeable almost instantly, though I can’t help but picture Mort’s son from Family Guy every time he speaks.

Sound is effectively used in the game, with a somewhat haunting score playing in the background as you traverse the heartless ice-scapes, fending off vicious bulbous attackers.

Overall, I can safely say that Lost Planet 3 is  quite an enjoyable, immersive game and avoids the ‘rule of 3’ (the third game being detrimental to a gaming series).