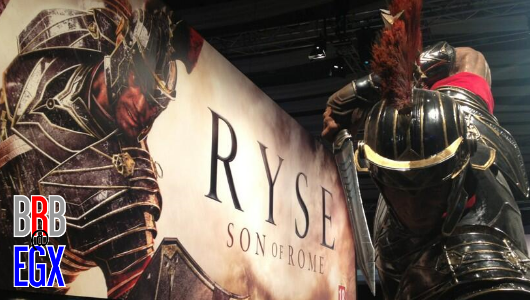 While the Xbox may be the usual stomping platform for Spartans, there’s a distinct lack of them in the Xbox One’s launch line up. So this has opened the way for the rise of a new warrior for the next generation in the form of a Roman.

Tim already spent extensive time with Ryse: Son of Rome at E3, but Crytek brought a new build of the game to the show floor at Eurogamer Expo that showcased the lesser discussed co-operative Coliseum mode. Myself and another expo attendee entered into the arena of the coliseum and were given the simple objective of killing the barbarians – but I quickly became lost in the sheer diversity of the map in front of me. In the foreground lay dead gladiators riddled with spears, handily available to be picked up for use in battle, beyond which were spike traps and broken columns and even further afield, the crowd were in full sight. And, being a gladiator in an arena, keeping the crowd entertained is almost as important as life or death.

In the arena, the crowd will cheer and respond not only to your bravado but also your skill in battle. While it took me a little while to get to grips with the combat, I could easily describe it as very reminiscent of Assassin’s Creed, with extra emphasis on blocking attacks with your shield and a similar strain of brutality found in the God of War series. It’s comfortable, bloody action with various combos, counters and ranged attacks in the range of those spears littered around the arena floor.

The wave defence game mode mixes things up a little by giving you some objectives to defend from time to time, but overall it feels like something that we’ve seen before a number of times. Perhaps not in this exact combination though and, as a launch title, Ryse will fill a void for this kind of game – if you’re not planning on picking up Assassin’s Creed IV: Black Flag that is.