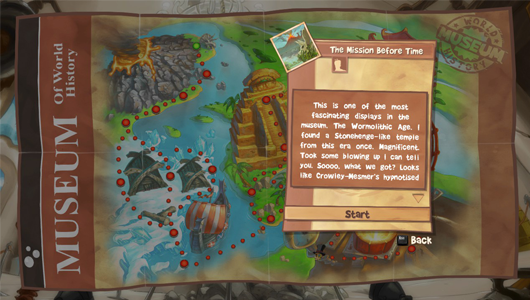 Worms are painfully difficult to get rid of, especially if you’re a British games developer named Team 17. Over the past two decades they’ve improved upon their turn based combat strategy game time and time again. And while there are some less memorable titles in the Worms portfolio, Clan Wars is what every Worms game should ever be. The absolutely best iteration in the line to date, optimised for the PC.

We all know how Worms is played – and if you don’t, it’s never a bad time to start playing. Two to four teams of little pink warriors are plunged into a fully destructible warzone, taking turns to attack the enemy teams armed with weapons ranging from the mundane to the down right silly. The winner being whose ever Worms team still has someone above the ground. It’s that simple premise that has led to the Worms’ series success all of these years, and one that I personally never tire of.

What sets Clan Wars aside from the rest of the series is, as the name suggests, fully fledged support for clans. Set up or join an online clan to take part in league matches against other clans – we’re the BRB Bombers if you’re interested. You can customise your Worms for battle with support for new customisation options from the Steam Workshop. Set your clan name and emblem to strike fear or a funny bone with your opposition and take the fight online. Also with Clan Wars, for the first time ever, different players can control the same team of Worms each over-watching an equal number of Worms. 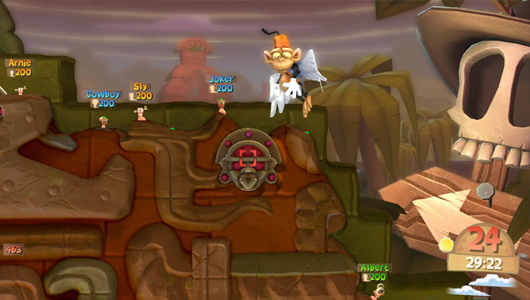 Fly my pretty, fly and kill them all!

Skirmishes are divided across two core gametypes – the traditional deathmatch where teams are randomly scattered around the same areas, and the forts gametype that has each team begin on their own island to defend and attack from. While this doesn’t sound like a lot of variety, each game can have a set amount of weapons available in the game, from a classic feel with only bazookas and grenades, to completely over the top madness with the likes of unlimited sheep, flying monkeys and airstrikes, or even getting the most of the new weapons such as the mega mortar.

While the focus of Worms: Clan Wars is indeed in the online and local multiplayer, there’s a fully fleshed out single player campaign, with the story narrated by The IT Crowd’s Katherine Parkinson playing Tara Pinkleton, a sarcastic nod to Lara Croft. The single player campaign is set across various exhibits in a museum, you see, with each exhibit inhabited and guarded by Worms from that particular period in time. Missions involve not just taking out the enemy, but doing so to get past physical obstacles and reach an end goal. This will generally lead you to use that shiny new weapon you just acquired, but there’s many occasions where you can choose your own path. 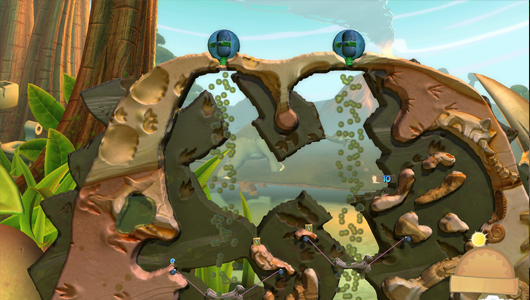 Bolted on next to the single player is a Worm Ops mode, which feature shorter, time trail missions with your scores being totted up on the global leaderboards. These make heavy use of the various physics objects, such as dynamic water, to add a challenge to the task and are a nice pace for when you don’t want to get bogged down in warfare that can take half an hour or so.

Classical Worms action.
A well voiced and entertaining single player.
Made exquisitely for PC.
Worm AI can be very sluggish.

While the formula for a Worms game hasn’t changed over time, the entertainment that can be found in these titles definitely shines through in Clan Wars. With a familiar, but well polished look and decent sounds throughout, it’s bound to strike a chord with veteran and new players alike. My only criticism comes from the AI, which often spent almost the entirety of their turns deciding what to do, which made playing against them feel dull and drawn out. But as a game designed with multiplayer in mind, you should always try and ditch the AI in favour of real Worms commanders.