It is rare that a summer blockbuster movie has anything to say other than “give us your money and we will fill the screen with explosions, witty quips and tantalisingly beautiful people”. One of my favourite movies of recent years bucked that trend when it landed in 2009, namely District 9. It was a story of oppression and prejudice, with well-drawn characters and stunning visuals. Like many, I awaited the next project of its creator, Neill Blomkamp, with growing impatience. Fortunately, the wait is now over and Elysium is as beautiful as his previous work – but not without its own issues.

Set in 2154, Elysium tells the story of Max [Matt Damon], a resident of Los Angeles and one of the few people still employed in the city. The world has become over-populated and diseased. In order to escape this, the wealthy have created a new home, located just outside of the Earth’s atmosphere. The habitat, known as Elysium, is a ring-like structure where disease and sickness are a thing of the past due to the technology on-board. This allows the residents to live happily, while their fellow man strives to survive in the world below. When Max is accidentally saturated in radiation at work and told he has five days left to live, he knows he must get to Elysium to save himself.

If you read the above and thinks it sounds a bit like Blomkamp’s previous film, you are not alone. The story of a regular man who becomes sick and must travel to a place to find a cure was already covered in District 9. While there are a few new elements thrown into Elysium, like an exoskeleton that increases Max’s strength, there are also a number of repeating parts, like a sketchily-drawn love interest [Alice Braga] and a mildly-psychotic antagonist [Sharlto Copley]. 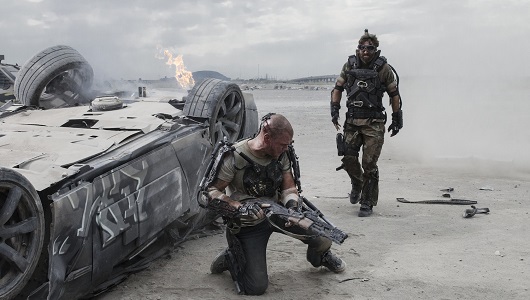 This would not be much of an issue if the movie was executed as well as the first – unfortunately, Elysium is as subtle as a brick allegorically. The politics of the movie, when talking about socialised medicine and the gap between the rich and poor, are so prominent that the storyline, and especially the characters, suffer for it. Damon, Foster and Copley all turn in very good performances but because the movie is lecturing you (loudly) throughout, their arcs are lost in all the noise. 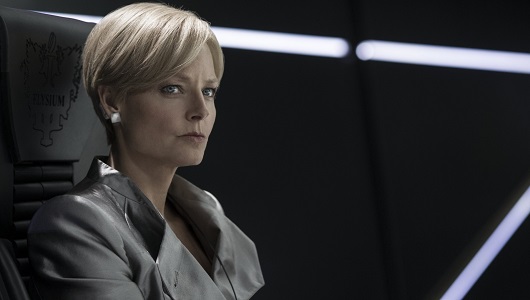 Thankfully, some of Blomkamp’s more positive attributes are on show also. The design of the world is utterly captivating. The technology and environments are well-crafted and exceptionally detailed. The sense of poverty and privilege evoked by both Los Angeles and Elysium respectively haunts you throughout. Even the droids used to subdue or service the human populations of each location illustrate the differences clearly. 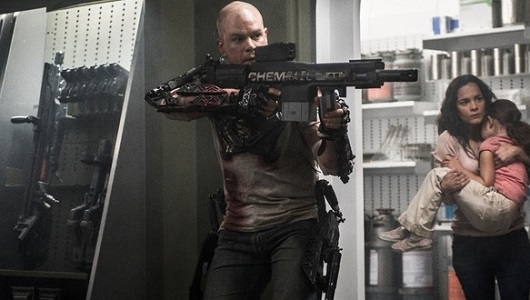 Everything in the world has a purpose and reality about it. The scene where Max has the exoskeleton suit attached to his body made me wince – this hasn’t happened to me since the med-capsule scene in Prometheus. Blomkamp and his design team seem to have a lot of fun designing weapons too. Like District 9 before it, Elysium has some of the most interesting weapons in cinema – the Insomniac Games of the movie world you might say (…or just me then).

Elysium is, to put it simply, not as good as District 9. Much of the same ground is covered, but more time needed to be spent on the characters and their story, rather than the message and politics. Despite the above, my impatient wait for Blomkamp’s next project begins now.