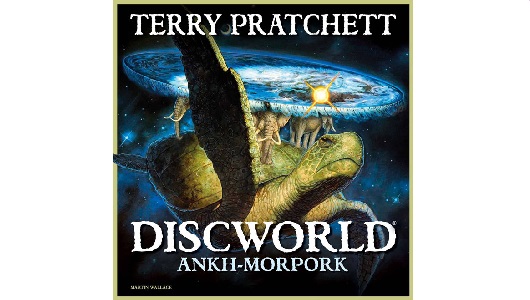 The Discworld Universe injects character into another tightly designed Martin Wallace creation, making it one of the best licensed games out there.

After the deliberate strategy of A Few Acres of Snow and the previously reviewed Doctor Who: The Card Game I’m swift becoming a Martin Wallace fanboy. His designs are not simple, but appear to be so – and therein lies the appeal. They use small, quick decisions and basic symbolism to allow players of all ages and abilities to dive straight into the action whilst explaining nuances and special cases only as they appear. His rules often ‘stack’ and a skilled player can combo unexpected items together to create elaborate strategies, strategies that feel like you’re truly testing the boundaries of the rules- challenging the designer; “Did you think anyone would try this, Martin?”

Martin Wallace designs Maths puzzles, Maths puzzles that you could put on display, step back and admire. “I see what you did there, Martin, very clever.”

I like Maths puzzles, but whilst they can be admired with detachment, they are often not as fun to play; a lack of personality is the price you pay for clean rules.

Ankh-Morpork does not have this problem. 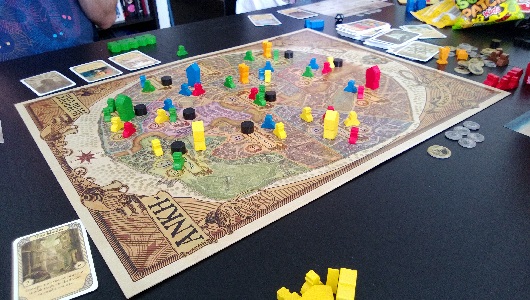 City management within the Discworld universe is a raucous affair with each party vying for control of at least four of the city’s twelve districts. Or maybe not, for certain players will have unique victory conditions; they might be in it for profit, or chaos, or simply playing for time. Weeding out those exceptions is a past-time that ensures you second guess every move, looking for hints of a secret agenda, or disguising your own.

Each player has a hand of cards, some money, a stack of wonderful wooden minions and a few buildings. Their cards allow them to place or move minions, build buildings, gain money and remove trouble makers – either peacefully or violently. Other cards may let you chain these abilities but in doing so often trigger world-changing random events.

Random events add a great deal of personality to the game, flooding rivers-side districts, summoning awkward-to-work-around daemons or igniting a fire that can tear through built up areas in an instant. They are rare enough to justify their often apocalyptic consequences and as the game progresses they form the punctuation marks in the chronicles of your city’s history.

The normal day-to-day play of the game is no less fun, not least because of the quality of the components and the fact that the artwork on every card is unique. The sheer act of moving stuff about is satisfying and each turn gives you just the right amount of things to flip, roll and place.

The surreal-ness of the theme is echoed in the gameplay. Everyone is desperately trying to lay the foundations for their own little empire – and the laying of foundations would be a hell of a lot easier to achieve if everyone else’s pieces would just stop getting in the way all the time! Even the summoning of Demons ends up being more a bureaucratic problem than a spiritual one; something which is quintessentially Pratchett and almost a self-satire of Wallace’s usually clockwork creations.

Another family-friendly game, one that demands a poker face but tries its damnedest to make you laugh. Ankh-Morpork is a love-letter to the Discworld Universe and only serves to heighten my anticipation of the forthcoming Sherlock Holmes game A Study In Emerald based on the Neil Gaiman short story.