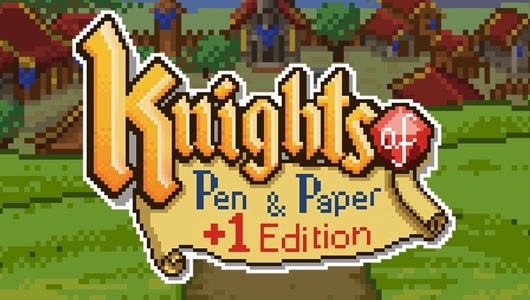 As modern gamers, we’ve become accustomed to wonderfully intricate and nuanced role-playing experiences – but just about every nugget of this RPG goodness owes a great deal to the old-school mechanics of table-top games like Dungeons & Dragons. In those days, the pen was mightier than the sword since, well, that’s all you had at your disposal; the worlds in which your characters inhabited were the product of the (occasionally overactive and somewhat disquieting) imaginations of the players, with your fate resting on the roll of a D-20.

Knights of Pen & Paper: +1 Edition harks back to the RPG days of yore, matching retro role-playing with the sights, sounds and pop culture references of yesteryear. So is there really no school like the old school? Let’s find out.

Those of you who are regular listeners of BRB UK probably remember me spouting copious quantities of praise in the direction of the original iOS incarnation of Knights of Pen & Paper which, by all accounts, was a true gem of a game and one that was ideally suited to mobile gaming.

Knights of Pen & Paper: +1 Edition expands upon the original game, keeps the same mechanics, beautifully crafted 16-bit pixel art and chucks in some nice new bits’n’bobs for good measure. As with the original edition of the game, you are charged with guiding a group of friends through an old-school pen and paper table-top role-playing game, dealing with foes, quests, NPCs and a borderline megalomaniacal dungeon master (much like the real thing, to be honest).

Unless you’ve been at the grog, conjuring up the vistas of a decent RPG experience whilst playing a table-top game is something that is dependent on (and perhaps limited by) your imagination. Not so with Knights of Pen & Paper: +1 Edition – although the table on which your band of adventurers play is a constant presence, the scenery – a wonderful collection of intricately detailed pixel art backdrops – swaps out as you navigate the world in which your adventure takes place. 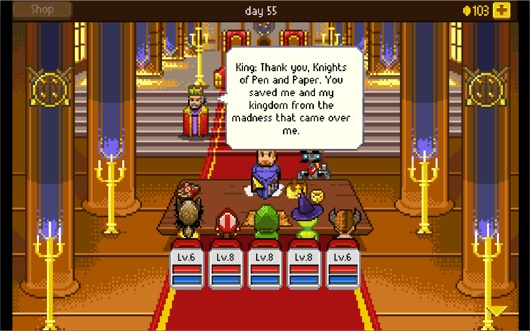 Each character – of which you can have up to five – level up as you progress, with a small collection of unlockable, upgradable abilities that are dependent on their character class. Each character, in addition to their selected class, also has a selectable personality; the jock, for example, is all about brawn and brewskis whereas the little brother has a boost to his initiative (no doubt thanks to him being a little whippersnapper).

The combinations of characters and classes mean that you can really craft your band of adventurers to suit your style of play. Heck, you can even create a Hipster Paladin – a fact that will doubtless mean that Knights of Pen & Paper: +1 Edition gets the BRB Boom seal of approval. Every character has item slots and upgradable equipment at their disposal too, meaning that you can fine-tune their stats even further.

It doesn’t just stop with customising your characters either – you can also decorate the room in which the game is taking place to imbue your phalanx of friends with a whole range of further stat boosts, be it ability duration, stat bonuses or gold and XP multipliers. How very meta. Sadly, redecorating your room in real life does utterly bugger all – well, apart from making everything reek of fresh paint.

Combat, be it as random encounters or as part of one of the game’s many quests, can probably be best described as a variant of the mechanics used in the Final Fantasy games of yesteryear. All of the characters – be they your heroes or a member of the hordes of the pen and paper world – are assigned a turn number, which dictates the order in which they act. This idea, whilst simple, means that you need to think how to utilise the varying skills of your characters depending on where they are in the order of play. This little twist of unpredictability keeps the combat fresh and avoids the tedium of continually queuing up the same set of actions over and over again. 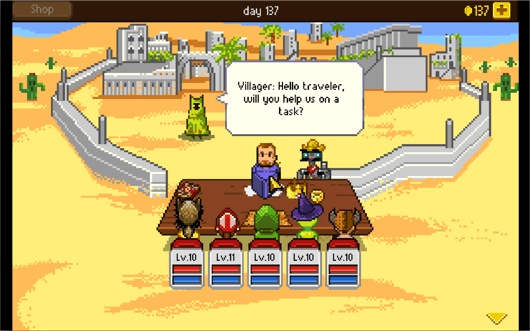 The adventure is punctuated by some wonderfully witty, self-referential dialogue; and there’s an absolute shedload of references to popular gaming and geek culture. Ninja Turtles? Check. Yoda? Check. Journey references? Check. Knights of Pen & Paper: +1 Edition feels like a real love letter to gaming culture – and manages to do so in a way that is well-judged and thoroughly enjoyable.

As I alluded to at the beginning of this review, the original Knights of Pen & Paper was released on iOS and Android devices a little while ago in the Summer of 2012. The advent of the +1 Edition simply, as far as I can work out, commemorates the game’s arrival on Steam, albeit with some extra characters, enemies, loot and dungeons. However, the iOS and Android versions of the game have subsequently been patched to include all of the content from the newly-released +1 Edition and are a fraction of the price of the Steam incarnation of the game (£1.49 versus £7.99).

Although the Steam version is the same hugely enjoyable game at heart, it’s quite clear that the experience was first and foremost designed for mobile touchscreens – and I must admit that the small screen is where Knights of Pen & Paper: +1 Edition is at its best.

Knights of Pen & Paper +1 Edition does a wonderful job of replicating the wonderfully nerdy, sometimes snarky and perpetually odd-ball atmosphere of table-top RPGs. Mix some excellent off-the-cuff dialogue, a wonderful art style and more gaming references than you could waggle a Metroid at into the mix and you get a brilliant, quirky little game that’s well worth a couple of hours of anyone’s time. But you might want to save a little cash and go mobile for your pen and paper fix.